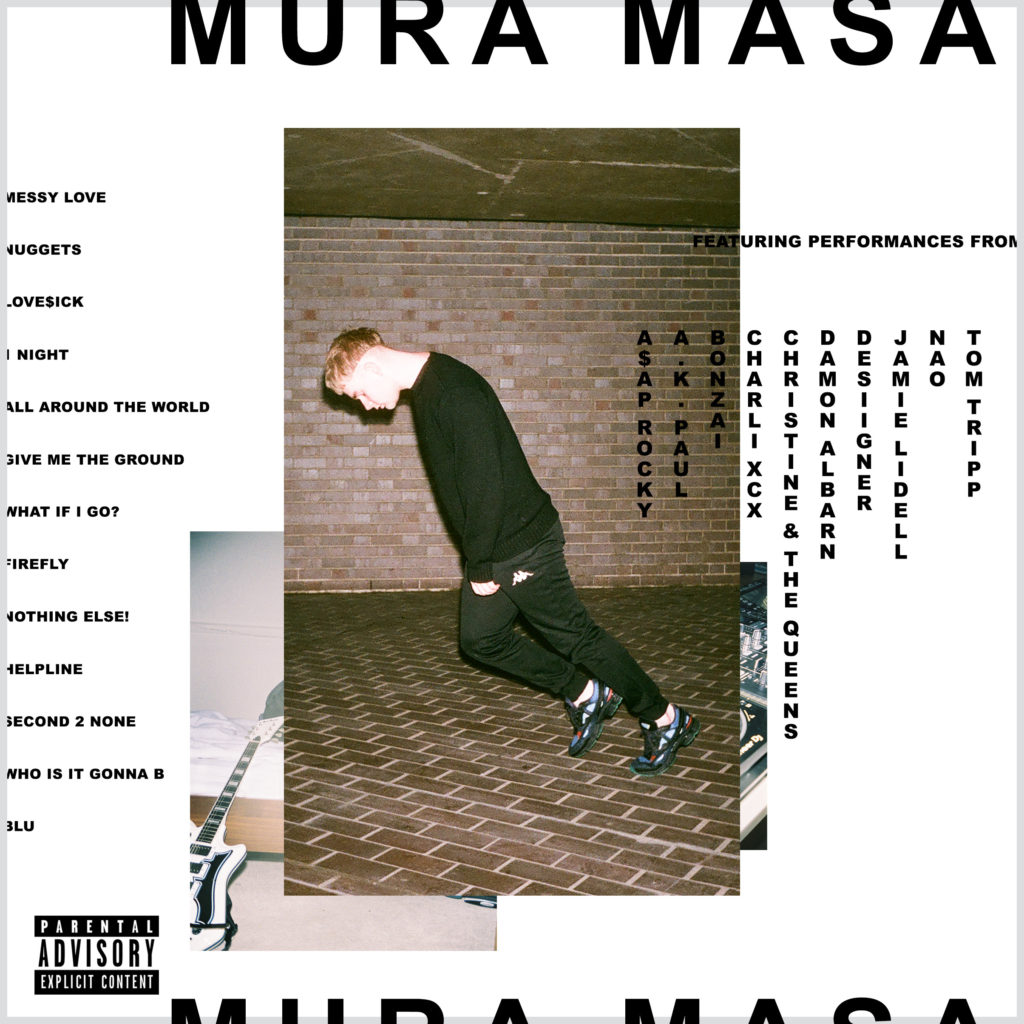 Mura Masa’s long-awaited debut album doesn’t quite shine with the same lustre as his early EPs and mixtapes, but his original vision for pop still alluring.

In the two years since the release of his excellent Someday Somewhere EP, Mura Masa, a.k.a. Guernsey-born DJ Alex Crossan, has seen a meteoric rise to fame, with giants from across the musical spectrum gracing his tracks with their presence with A$AP Rocky, Charli XCX, Damon Albarn and Desiigner all appearing on his new self-titled album. Hearing Someday Somewhere for the first time two years ago, it was clear that Mura Masa would become huge, but the speed at which he has achieved such popularity has been staggering, and it’s hard to believe that he’s only 21 years of age.

Crossan’s first mixtape, Soundtrack To A Death, was an enchantingly volatile journey through Mura Masa’s experimental beginnings, and staggeringly impressive considering he crafted it in his teens. Someday Somewhere was a refined and near-flawless follow-up. He had clearly defined his own style, packed to the gills with xylophones, wavy synths and quirky vocal manipulation.

Some of this is still present on his debut album, with the addictive hit ‘Firefly’ making a welcome reappearance. ‘Lovesick’ was another highlight on Someday Somewhere, and Crossan includes A$AP Rocky’s version on the album. Rocky’s feature does little to enhance the song, but is a harmless inclusion. ‘What If I Go’ is the real highlight on Mura Masa, a gorgeous and raw ballad which showcases Bonzai’s fantastic vocal abilities, her voice loaded with emotion as she belts out an ode to her lover, who just happens to be producing the song. It’s one of the best songs to come out of the electronic music scene in the last few years, truly impossible to dislike. ‘Helpline’ with Tom Tripp is also a romp, with a catchy hook layered over a punchy bassline.

Mura Masa’s sound has certainly changed considerably over the last couple of years, and this can be observed even within this album. Where his focus was once on the creation of stunning symphonies that stood out in the context of a dull and uninspired pop mainstream due to their oriental inspiration and lack of derivation, Crossan has begun to trudge down the path of mass appeal. This is hardly surprising; by producing accessible and surprisingly good pop bangers such as ‘One Night’ with Charli XCX, he reaches an entirely new audience, and one that has propelled him to his position as a BBC Radio 1 regular.

Headlining a Warehouse Project at the end of this year, Mura Masa has come a very long way from the tiny 200-capacity venue I saw him perform at in 2015. There are advantages of this, such as the attention he has grabbed from Gorillaz mastermind Damon Albarn, leading to Blu, a solid collaboration to close the album that perfectly highlights not only the nuances in production that make Mura Masa’s abilities so unique but the power of Albarn’s voice on slower songs.

Crossan’s relatively newfound fame is a double-edged sword, however, and the track ‘All Around The World’ with Desiigner is nothing short of a dull and jarring travesty that should never have seen the light of day, let alone make the cut on a debut album. It’s instances such as this that contribute to a certain hodge-podge feel, almost as if much more thought was put into the constitution of each track than the sequence of songs. This is particularly unfortunate given that this has never been an issue for Crossan before, with both of his EPs playing smoothly from start to finish with a clear structure.

Nevertheless, this album is full of thoroughly enjoyable tracks, and the production quality is immense. While Mura Masa lacks slightly the unwavering consistency that Crossan had shown in past years, most of the tracks still glow with originality, and this record will push him only further into the spotlight. He deserves it. (7/10) (Josh Kirby)

Listen to Mura Masa here via Spotify, and tell us what you think below!