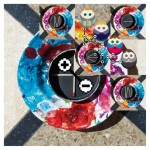 For Danish art-rockers Mew it’s been six years since their last release No More Stories…. Their long awaited sixth effort +- is in a very similar vein to previous releases of MOR-inspired proggy-pop. With the help of Bloc Party’s Russell Lissack on guitar duties on ‘My Complications’, lead singer Jonas Bjerre’s vocals provide the most interesting element to the record. His distinct style draws him comparisons to French pop outfit Phoenix.

Sadly, the album never really gets going. There are numerous elements of pop, jazz and heavier prog sounds which struggle to combine effectively. ‘Clinging To A Bad Dream’ opens with an interesting jazz intro, before bursting into a rather generic electro-pop track which seems a real shame. ‘Row’ is very similar in that an interesting opening few bars are spoilt by over-indulgence in an attempt to create an epic pop track, which fails due to its length of 10 minutes.

The remainder of the album falls into similarly disappointing territory with an indulgence towards a busy pop sound. ‘Water Slides’ and ‘Cross The River On Your Own’ never really divert from the Phoenix-influenced style of prog/electronic pop. Although the tracks have some interesting textures, the soundscape just doesn’t progress throughout. After a six-year hiatus, this record is far from the most memorable from the Danish quartet. However, it is meticulously crafted with a few melodic moments. (5/10)