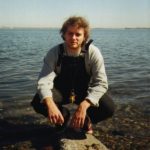 Front cover of ‘Another One’

Canadian-born indie troubadour Mac DeMarco became the toast of the indie underground in 2014 with Salad Days, a breezy album of bedroom song sketches that benefitted from sounding spontaneous and demo-like. He’s following it up with a brace of mini-albums in the form of Some Other Ones (consisting entirely of instrumentals) and Another One. It’s not explicitly personal in the same way as Salad Days – by all accounts, the attention and analysis given to that album, one of the indie hits of last year, startled DeMarco somewhat. Not that that has been any kind of disincentive to connect with his fans any longer – at the end of this 8 track collection, he actually gives out his New York address and invites listeners to “stop on by” for a coffee – but Another One sees him put up a few barriers in his songwriting style, finessing and texturizing his style rather than overhauling it.

Musically, we kick off in the same place as Salad Days with the sunny, tremolo guitars of ‘The Way You’d Love Her’, channelling the college rock influences of early R.E.M. and Pavement. During the art-rock, not-quite-a-solo bridge, he picks his guitar with true indie virtuosity. That relaxed, unhurried vibe continues throughout the record. With ‘Just To Put Me Down’, DeMarco offsets his desperately insecure lyrics with a jaunty tune. On the title track, when he croons softly that he’s “afraid I might not love you any more”, he makes it more than a platitude by turning the blame inwards. Elsewhere, there’s romantic heartache and longing with ‘A Heart Like Hers’ and ‘I’ve Been Waiting For Her’. Another One comes off sounding like Pavement’s swansong Terror Twilight if it was recorded with keyboards and in the space of a day. While it may be more songwriter-ly and less confessional, it’s a rather touching and very pretty addition to Salad Days, and will hopefully be added to a re-issued version of the main album so that new fans can enjoy a whole body of work. (7/10)

Listen to Another One here!