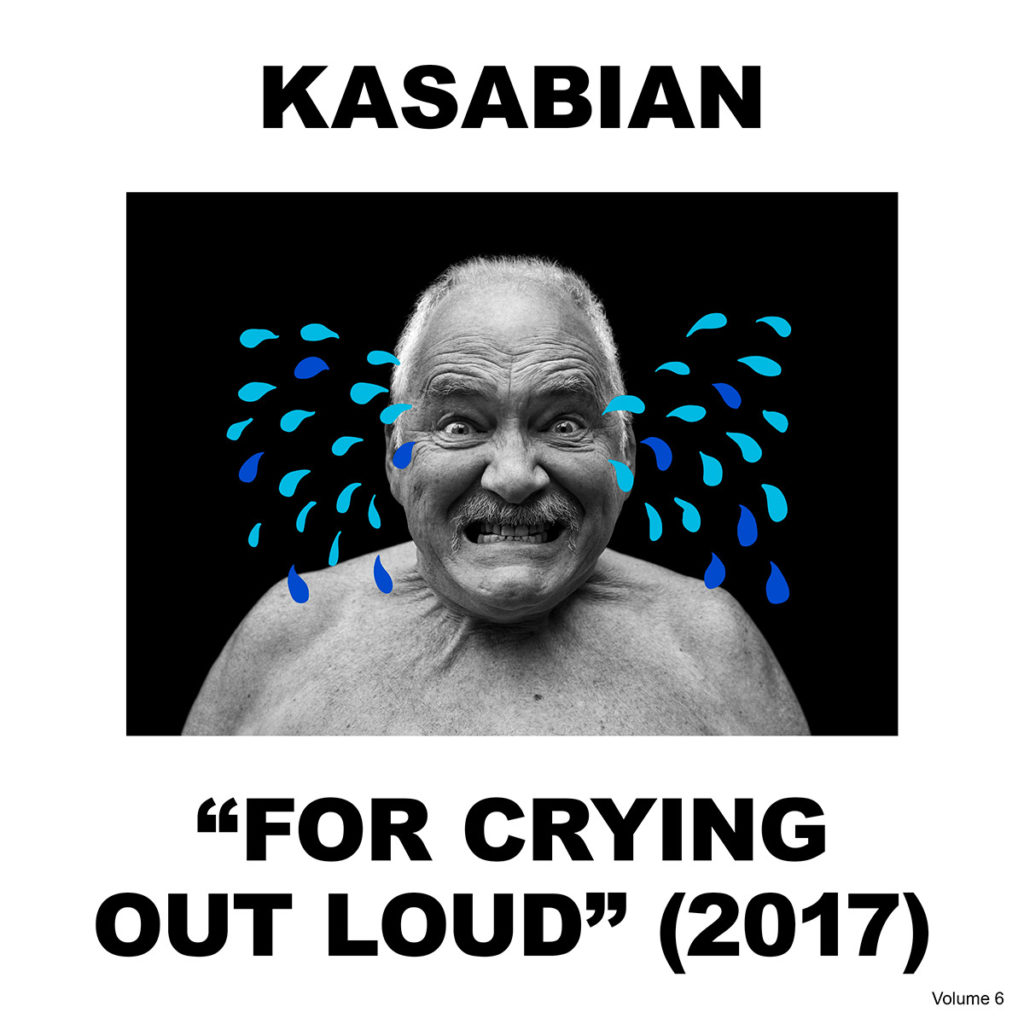 Kasabian’s sixth studio album ‘For Crying Out Loud’ sees them go over old ground yet again.

It’s a pretty well-established trope that music and football don’t mix, but blokey indie veterans Kasabian are clearly hoping that the sport can serve as a thematic inspiration for their music – namely, the incredible exploits of their beloved Leicester City this time last year. The team’s glorious, almost impossibly unlikely Premier League triumph last summer and the bright, colourful and multi-cultural party mood that subsequently descended upon Leicester, which Kasabian themselves tapped into with a one-off gig at the club’s King Power Stadium a few weeks after their title victory, seems to have been the inspiration for the group’s sixth studio album, For Crying Out Loud.

The sheer celebratory atmosphere of that concert (captured here on the bonus disc of the deluxe edition) seems to have lifted Kasabian’s energy levels in comparison to the humourless cod-conceptualism behind 48:13 three years ago. The band’s twin mouthpieces / gobshites Tom Meighan and Serge Pizzorno have always talked a good game when it comes to positioning themselves to the standard-bearers of populist, arena-filling indie, but they rather seemed to take it all a bit too seriously last time. Their discography highlights like ‘L.S.F.’, ‘Fire’ and ‘Take Aim’ have always had a certain knowing levity that makes them weirdly impervious to criticism.

But on For Crying Out Loud, some of that much needed sense of fun seems to have returned. Pizzorno knocked out the record’s 12 songs in the space of six weeks, apparently seeking the kind of unconscious impulse that fuelled classic hits of the ‘60s instead of overthinking and possibly overcomplicating the material. It’s therefore best to try to understand this record as a partially successful reaction to its predecessor.

Notwithstanding the renewed sense of purpose, the disco flourishes and occasional psychedelic swirls, it’s actually business as usual here, with many of the tracks feeling quite interchangeable with any other period of Kasabian’s career. The banging techno influences driving the Bloc Party-esque opener ‘Ill Ray (The King)’ will have the detractors rolling their eyes and the fans in grins. The closing chants of “king for a day” hint at the LCFC inspiration behind it all.

Lead single ‘You’re In Love With A Psycho’, with its clunky lack of sensitivity regarding mental health issues (see the video…), is paint-by-numbers Kasabian, and sure to be a mainstay of their live sets going forwards. ‘Twentyfourseven’ and ‘Comeback Kid’ are a noisy, blustery and entirely forgettable moments. When Kasabian are like this, they are very tiresome, their sense of energy feeling incredibly forced.

As For Crying Out Loud progresses, the guitars tend to give way to sounds that are slightly more reliant upon non-indie influences, but the record doesn’t particularly pay out on its threats to become more interesting. The central problem with the album is encapsulated by its eight-minute centrepiece ‘Are You Looking For Action?’. Starting with a taut, pleasurable disco-influenced rhythm with handclaps for its first few minutes, it then totally fails to go through the gears. What could have been an epic career highlight ends up desperately overstaying its welcome. Kasabian frequently have the grand ideas but don’t explore them with any imagination – something they proved they could do with the anything-goes thrills of 2009’s West Ryder Pauper Lunatic Asylum, still their career best.

On the positive side, when Kasabian lay off the arena-filling hubris that is sadly their default setting, they make some pretty enjoyable quieter numbers. ‘The Party Never Ends’ and ‘Sixteen Blocks’, both dark and mysterious, play well with Meighan’s paranoid lyrics. Closer ‘Put Your Life On It’ channels a Beatles-y melody and the kind of gospel choir climax that Primal Scream have been specialising in for years. It’s as clichéd as hell, but its curiously moving quality is what Kasabian are capable of when they drop the laddish swagger and try something a little more heartfelt. Frustratingly, they don’t show it very often.

Ultimately, the overriding impression one gets from For Crying Out Loud is that Kasabian have not only covered this ground before, but that they’ve also done it better before. Everybody’s had their opinions on Kasabian over the years, but it all feels like so long ago now, and their sixth album is very unlikely to change anybody’s opinion about them either way. However many by-the-numbers crowd-pleasing set-pieces there are, much of For Crying Out Loud feels stale even by Kasabian’s own revivalist standards, and it does seem deeply ironic that a band which has for a long time trumpeted itself as the saviours of guitar music should have become so incredibly reliant upon synthesisers. (5/10) (Ed Biggs)

Listen to For Crying Out Loud here via Spotify, and tell us what you think below!