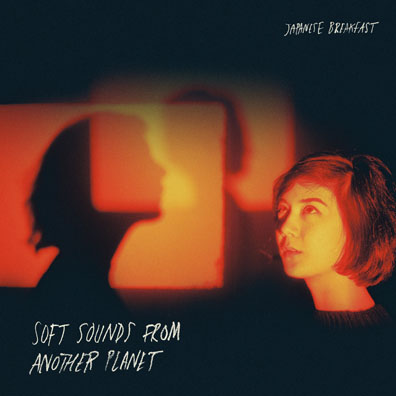 After the death of Michelle Zauner’s mother ‘Soft Sounds From Another Planet’ is a next-step-forward from her 2016 debut album ‘Psychopomp’ an album that, whilst harbouring indie-pop qualities, carries the matters of loss and grief.

Michelle Zauner, former frontwoman of Philadelphia’s own emo band Little Big League, successes once again with the release of Soft Sounds From Another Planet under the name of her lo-fi experimental-pop project Japanese Breakfast.  After the death of Michelle Zauner’s mother ‘Soft Sounds From Another Planet’ is a next-step-forward from her 2016 debut album ‘Psychopomp’ an album that, whilst harbouring indie-pop qualities, carries the matters of loss and grief.

This album bleeds sci-fi with the quivering synths in the opening song ‘Diving Woman’, quickly joined by a steady drum beat and a dream-like guitar melody.  The soft vocals of Zauner rest well on this blend of instruments. The words “I want it all” are repeated throughout small sections of the song supported by an instrumental change that almost slows down the song, with sounds of a deteriorating, almost screaming, guitar and the same warbling synths heard at the beginning, before speeding back up to the dream-like guitar melodies and groovy bass.

‘Road Head’ is a re-done and better made version of a song from Japanese Breakfast’s lo-fi tape ‘American Sound’ released in 2014. This song greets you with a quick and hazy guitar sound accompanied by lo-fi percussion beats.  The catchy bass line behind the unmistakable and mesmerizing vocals of Zauner quickly draws you in.

Elsewhere, ‘Machinist’ sees elements of an almost robotic voice introduced keeping the sci-fi feel to this album. This song is heavily synth based but surprises listeners with a sax solo towards the end of the song.

‘Planetary Ambience’ exudes that deep-space feel with beautiful, ethereal and glitch-like tones and sets this song aside from the rest of the album adding true emphasis to the title Soft Sounds From Another Planet.   There are no actual lyrics to this song, leaving it full of wonder and thought and room for appreciation.  A brilliant way to let the album breathe.

The title track ‘Soft Sounds From Another Planet’ jumps up from distant, echoic vocals to prominent guitar and an almost yearning voice.  “In search of a soft sound from another planet” look no further, you have found it.

We are introduced to a different style of song with ‘Boyish’, steering away from the other-worldly sounds and back into something more human. This song was released on ‘Tropical Jinx’ an album released in 2014 by her associated act ‘Little Big League’ and has since been re-made for this album. This version of ‘Boyish’ is much slower and seemingly more romantic.

’12 steps’ drives the album further away from the dream-like state that songs like “Diving Woman’ and ‘Planetary Ambience’ put you in but is in no way misplaced on the album as ‘Jimmy Fallon Big!’ pulls you right back into delusions.  The fluttering keyboard on ‘The Body Is A Blade’ gives this song great optimism, this is a song with a life-goes-on attitude, even in the face of great trauma donning the lyrics “The Body Is A Blade That Cuts A Path From Day To Day”.

The latter of the album, including songs ‘Till Death’ and “This House’ and ‘Here Come The Tubular Bells’ takes on an overall sad vibe unwrapping the true nature of this album.  Whilst this album is packed full of pretty interludes and innovative sounds it is also teeming with great emotional depths.

This album takes ‘Japanese Breakfast’ to a new a new, and much bigger, level of sound. By building on previous work and exploring some insular moments with a truly outgoing attitude Sounds From Another Planet excites as much as it does bewilder. (8/10) (Rebecca Corbett)