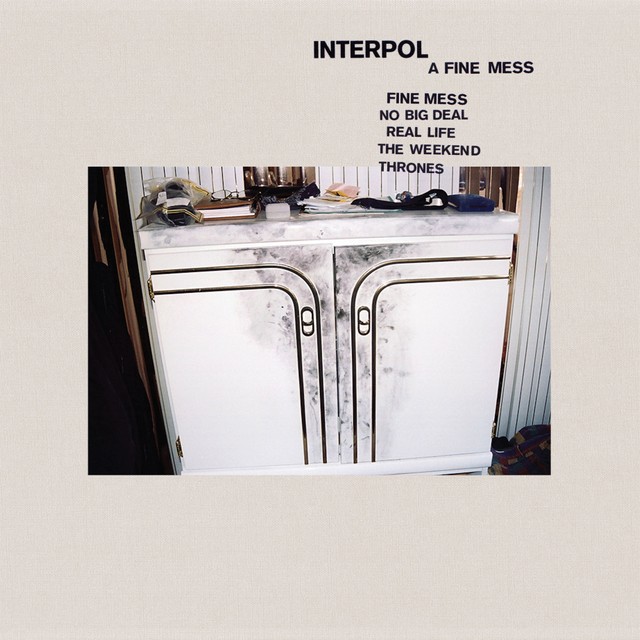 A couple of moments aside, Interpol’s latest EP ‘A Fine Mess’ is a tedious exercise in by-numbers post-punk rock.

Naming an EP A Fine Mess and then releasing it to the world’s music press is perhaps a risky move from NYC indie-rockers Interpol. While not a ‘fine mess’ per se, the group’s latest release falls flat. Opting for a more summery vibe, the signature melancholia that characterised their’s most recent album Marauder last summer is toned down on this five-track EP almost completely. The result is almost devoid of any of the real character or edge that has defined a lot of the band’s oeuvre. But, despite quite obviously dumbing down in preparation for the festival season, there are a few fleeting moments on this record that save it from total boredom.

Opening tune ‘Fine Mess’ has a great hip-shaking chorus with an equally catchy vocal hook. ‘Real Life’ is the only song here with any emotional resonance, as frontman Paul Banks sings, “All these secondary lives are falling into / scattered dreams, scattered people”. The topic might be about frontman Paul Banks’ distinctly un-relatable experiences in showbiz, but there’s enough open-ended meaning here to make it noteworthy.

Unfortunately, the rest of A Fine Mess, mercifully only 17 minutes long, remains a tedious exercise in Interpol-by-numbers. On ‘No Big Deal’ the limp main hook is obviously supposed to keep us interested but actively disengages. ‘The Weekend’ is perhaps the dullest single released all year, and memorable only for its utter mediocrity. ‘Thrones’ picks up on the melancholic sheen of ‘Real Life’, offering a brief glimmer of hope that fades quickly to become the crowning banality of an EP of ennui.

Although A Fine Mess is not all bad and offers glimpses that a less gloomy Interpol could conceivably work in the future, it is let down by its forgettable songs. ‘Fine Mess’ and ‘Real Life’ are the only two songs worth mentioning. Ignore the rest. (4/10) (Jake Leigh-Howarth)

Listen to A Fine Mess EP by Interpol here via Spotify, and tell us what you think below!