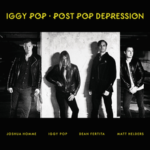 Produced by Josh Homme of Queens Of The Stone Age, Iggy Pop’s 17th studio album has been rumoured in some quarters to be his final one, and features a star-studded line-up. Homme himself plays guitars alongside contributions from Arctic Monkeys’ Matt Helders on drums and QOTSA’s own Dean Fertita. Dropping a sly clue as to his possible retirement with the brilliant title Post Pop Depression – who knows if we can really take the legendary prankster at his word? If it is indeed his last, then it would make a fine swansong.

What started as a simple text message conversation between Pop and Homme soon became a musical partnership, after a number of lyrics and ideas were traded between the pair. These conversations soon turned into a recording session, which according to Homme, helped him with recovery from the Bataclan Attacks at the end of 2015. Post Pop Depression was the result on top of a short tour throughout May of this year.

It’s no surprise, somewhat, that stylistically the album pays homage to David Bowie. More notably, this album is a direct nod to the famous ‘Berlin’ era, in which Bowie and Pop rehabilitated each other’s personalities but also created some of the finest music to arrive from that decade. ‘Gardenia’ and ‘German Days’ in particular share particular similarities to David Bowie’s Low. You only need to listen to the echo chamber vocals to recognise that Iggy is channelling Bowie. If you bear in mind that this session was recorded before Bowie’s death, it gives an insight that perhaps Iggy Pop knew. Similarly, ‘American Valhalla’ holds distinctive minimal qualities to Bowie’s final record Blackstar. The darkness of the track and its discussion or morality and mortality spark particular similarities.

Post Pop Depression combines the cleverness of Pop’s ability to create a guitar-laden pop track, but with a distinctive theme of darkness – similar to that of Nick Cave. The influence of Josh Homme is patently obvious on ‘In The Lobby’ in which the morbidness of Pop is equally balanced with the melodic Stooges-influenced style of Queens Of The Stone Age.  Although, distinctly slower than other tracks, ‘Vulture’ opts for Ennio Morricone influenced western rock. It’s hardly surprising as the album was recorded and mastered at the desolate Rancho De La Luna in Joshua Tree, California over a two week period. Iggy rattles and wails through a barrage of orchestral string sections and layered guitar riffs.

Although this may seem like a supergroup effort, and indeed was announced as such, Iggy Pop is the undisputed star of this record with his very particular style of evocative aggression and hints of underlying violence. On the basis of Post Pop Depression, let’s hope this isn’t his last release as he certainly has plenty left to offer the music scene in 2016. (7/10)

Listen to Post Pop Depression here, and tell us what you think below!