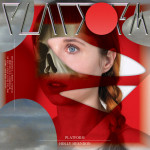 Cards on the table here – I’ll be the first person to admit that I’ve never really taken to electronic artists who solely use laptops – particularly in a live setting. I’ve often thought the physical art of making music and mixing has instead been removed by the laptop. For all I know they could be doing anything while pretending to DJ – I guess I just like the vulnerability of a musician without seeing them having to hide behind a chunky laptop screen! Holly Herndon’s utterly fascinating second album Platform, however, has caused me to reformulate my views on computer-based artists, and it really isn’t very often that a single listening experience causes a hard-bitten music fan to reconsider basic principles.

First and foremost, it demands more than one listen – it’s weird and wonderful. Think along similar lines as The Knife, Aphex Twin, Sia and Burial. Herndon is a university graduate at Stanford University’s Centre for Computer Research in Music and Acoustics, and she tackles issues including surveillance and inequality. Taking these themes into her art, and inspired by Berlin’s techno scene, Herndon takes a foray into the future of music enhanced by chopped-up, processed vocals; ‘Chorus’ being a prime example. A number of tracks even sound like a potential cinematic scores or a TV advertisement soundtracks – incoherent, yet unmistakably melodic and intelligent. ‘Locker Leak’ takes a similar advertising style stance with a number of spoken-word phrases over the top of hazy electronic samples. It flips between disorientating electronica and a futuristic commentary on media consumption.

‘Lonely At The Top’ is one of the most interesting tracks on the record, objectively speaking. ‘ASMR’ is a popular hit search on YouTube in which vloggers experiment with audio to give the listener tingly sensations in each side of the ear (it’s weird but it works!). ‘Lonely At The Top’ is pure ASMR, which places the listener straight into the middle of an intimate incident involving the narrator. ‘DAO’ uses Herndon’s impressive vocal range alongside a number of deconstructed and re-assembled yelps, bleeps and inhaling samples to create an all-encompassing electronic masterpiece.

Platform is an extraordinary record that should be seen as an audio artwork and a commentary on the future of music. The title should say it all – what’s the point in making music unless you use it as a base from which challenge your audience? Herndon provides an insight into our reliance of technology, which is increasing an alarming rate. It may be less accessible to some listeners due to its avant-garde nature, but give it a chance: it will soon begin to make sense. Herndon has made a strong candidate for 2015’s album of the year – thought-provoking, experimental and startlingly original. (9/10)