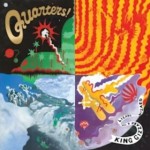 The elaborately named Australian psychedelic rockers King Gizzard & The Wizard Lizard have approached their new record with a different variation of psych-rock following the success of 2014’s I’m In Your Mind Fuzz. The four-track album Quarters! owes much more to jazz-psych sound in comparison to their all-out drug-inspired previous effort. The brakes are off for King Gizzard and, at ten minutes and ten seconds long per track they have full reign to experiment with their sound. It’s perhaps a little self-indulgent but the psychedelic palette is so staggeringly broad that they can just about pull it off. This is probably more towards the Tame Impala/Pink Floyd end of the psychedelic rock spectrum.

‘The River’ is a guitar driven jazz affair which meanders along with a distinctive 60s sound. This is followed up by ‘Infinite Rise’ which features a quirky chord progression with a familiar distorted groove. It doesn’t build too much until the eighth minute when it escalates into an impressive fuzzy guitar outro. The third quarter arrives with ‘God Is In The Rhythm’ which feels like an over-familiar Tame Impala cast-off. It’s a slower track filled with bluesy riffs, but it doesn’t really progress in pace or rhythm. ‘Lonely Steel Sheet Flyer’ is the heaviest track of the record with simmering guitar hooks with an almost spaghetti western feel. It races through plenty of hypnotic guitar arpeggios, and ends the record on a significant high.

Quarters! isn’t quite as fulfilling and chaotic as I’m In Your Mind Fuzz, and also suffers from over-indulgence on the part of the musicians. The construction of it necessarily means that it lacks the immediacy of their previous album, but it’s a musical journey perfect for the summer and worth persevering with. In years to come, it may well develop a cult following or come to be regarded as a grower, though the band themselves have done better work. King Gizzard & The Lizard Wizard just about manage to pull it off without any harm inflicted on the listener’s attention span! (6/10)