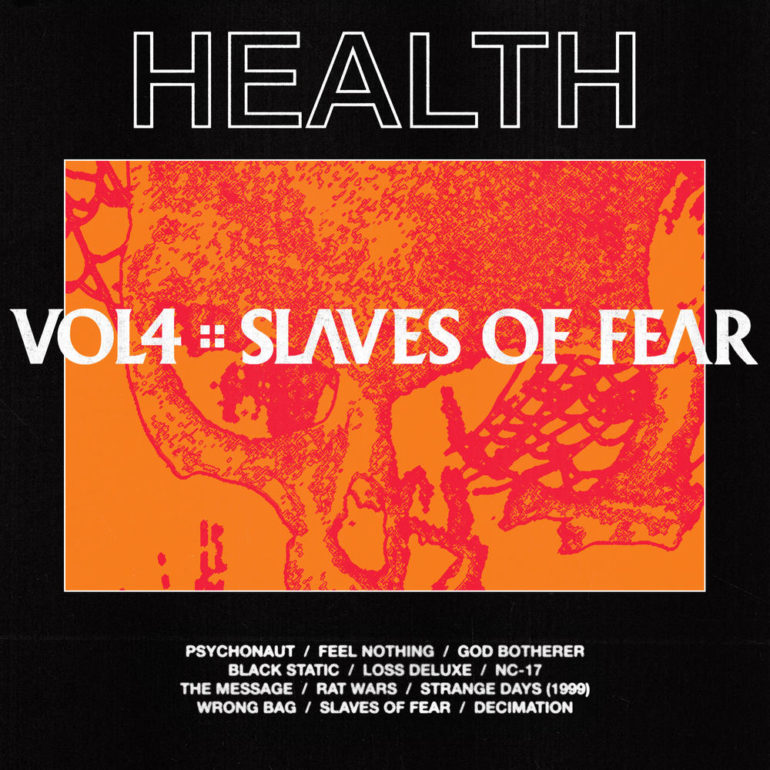 HEALTH’s doom-laden noise rock formula is still compelling on ‘Vol. 4 :: Slaves Of Fear’, but needs to be melded with new ideas.

When Los Angeles noise merchants HEALTH returned in 2015 with their third album Death Magic, they decided to fully embrace the nihilistic tendencies that were patently obvious throughout their work. It was a move that paid off; by infusing their experimental, pummelling brand of rock with Depeche Mode-esque goth-pop, industrial soundscapes and bleak lyrics lamenting the human condition, they created a haunting soundtrack that could perfectly accompany the end of the world.

The band’s latest effort, Vol. 4 :: Slaves Of Fear, offers up more of the apocalyptic dread that characterised Death Magic. Opener ‘PSYCHONAUT’ sets the tone with its cavernous drumming, abrasive synths and Jake Duzsik’s timid, world-weary vocals floating above the mix, the sound of a man who has become disillusioned with his existence and his surroundings. Duszik further contemplates the ultimate pointlessness of life on album highlight ‘SLAVES OF FEAR’ (“No pain has purpose, no one above to judge us”), which begins with a foreboding bass pattern that builds towards a powerful chorus propelled by hulking metal riffs and a towering beat.

Despite HEALTH’s undoubted ability to construct menacing, chilly atmospheres, the ultimate drawback is that their sound is almost identical to that of their previous album. Granted, it’s still thrilling in places; ‘FEEL NOTHING’ marries their trademark buzzsaw guitars and synths with unabashed pop hooks, while ‘WRONG BAG’ is a pulsing instrumental that offers a welcome respite from the weighty lyrical themes. Conversely, songs such as ‘LOSS DELUXE’ and ‘THE MESSAGE’ simply adhere to the formula the band established on Death Magic, and don’t particularly do much to stand out from the rest of the tracklisting. When they do try their hand at something slightly new, including their somewhat forced attempts to incorporate trap beats on ‘BLACK STATIC’ and ‘RAT WARS’, the results are underwhelming.

Duszik’s ruminations on life, death, love and loss remain captivating, and the heavy, quaking instrumentation still has the capacity to conceive dark images of a world on the brink of total collapse. The lack of progression is disappointing though, and the similarities to Death Magic are all too obvious. Vol. 4 :: Slaves Of Fear is not a bad album by any means, but some more new ideas wouldn’t have gone amiss. (6/10) (Matthew Watkin)

Listen to Vol. 4 :: Slaves Of Fear by HEALTH here via Spotify, and tell us what you think below!