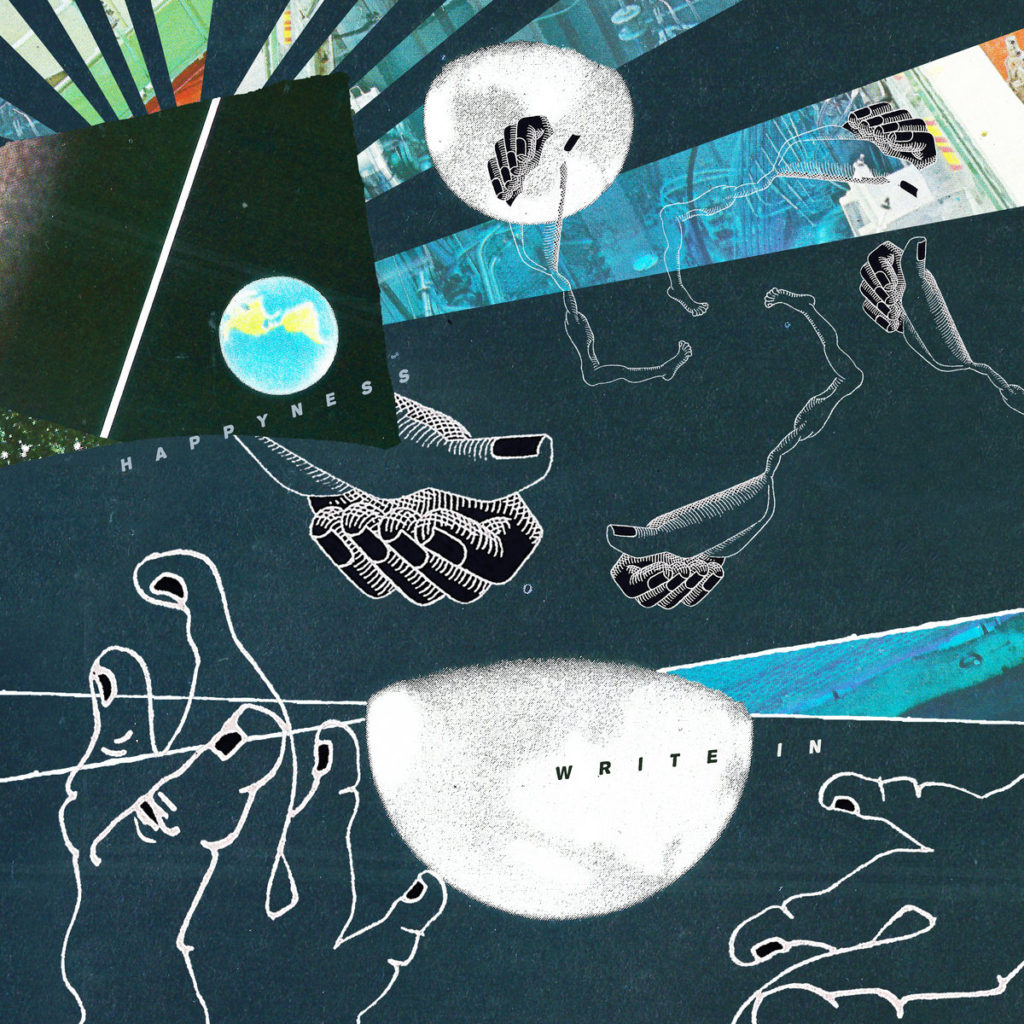 Building on their 2014 debut, Happyness have released one of the best British guitar albums of the year so far with ‘Write In’.

With an NME Award, a successful debut and an ever-increasing fanbase to their name, the South London-based trio Happyness are doing justice to indie outfits from the ‘90s justice. Their style is heavily based on this era of US college rock or, as some have called it, ‘slacker’ rock but in collusion with their British mindsets. Instantly, bands like Weezer and Pavement spring to mind as beacons of guidance. The band consists of Ash Cooper (drums), Joe EE Allan (bass and lead vocals) and Benji Compston (guitar and lead vocals) – all of whom are apparent multi-instrumentalists.

Major influences like Pavement, Wilco and Sparklehorse keeps the vital backbone of their music supported non-stop. Their charming debut Weird Little Birthday was a modest but compelling album which showcased incredible songwriting ability from the band. Lyrically, the album had a warm and cosy feeling with the most amusing song being ‘Baby, Jesus (Jelly Boy)’ revolving around a jealous young boy who shares the same birthday as Jesus. Tracks like ‘Great Minds Think Alike, All Brains Taste The Same’ and ‘It’s On You’ were very Pavement-esque and the guitar chords throughout the album had highly concentrated amounts of emotion behind them. In addition, a hint of undistorted Smashing Pumpkins was loitering too, but without Billy Corgan’s one-of-a-kind artistic grandiosity. Ultimately, Weird Little Birthday had that special ‘something’ that isn’t identifiable at first glance.

Their sophomore LP Write In oozes out the same US college rock / ‘slacker’ vibe. Where the debut had a laid-back, sombre approach, the new album also has this plus a notion of an upbeat agenda. An example of this is the track ‘Anytime’ where the melodramatic vocals from Compston and Allan are hypnotizing and the muffled guitar tone adds a newfound elegance to their music. The two-minute blast ‘Bigger Glass Less Full’ features a little infectious guitar solo at the beginning and between the end of the verse and going into the chorus, the higher-pitched chord change is heart-piercing.

Going back to Happyness’ mellow customary principles, Write In’s opener ‘Falling Down’ delivers the poignant essence of the band. The innovative chord sequence gives the song sizeable augmentation and creative depth. The track ‘C Is A B A G’ can almost be considered to be a space rock composition as a result of the sound effects being discharged – Jason Pierce from Spiritualized could’ve been the brains behind this one. The focal point of ‘The Reel Starts Again’ and ‘Through Windows’ is the piano. Hidden with regular ingenious piano hooks and pulls here and there, Happyness have this elusive tendency to make seemingly-dull 4/4 rhythms so intoxicating – must be that special ‘something’ coming into play. For shear originality, as well as the album’s largest gem, look no further than ‘Uptrend / Style Raids’. The guitar ditty is ridiculously catchy and Allan’s silky bass tone enters the spotlight too. When listening, it’s a guaranteed 6 and a half minutes of continuous “de-de-de-de-de….”.

Write In is a solid effort that surpasses Weird Little Birthday in most aspects. On the other hand, due to the chilled-out demeanour of the vocals, the lyrics are sometimes a little hard to pick up. Despite this, the listener can tell that the lyricism is as eccentric as it was on the previous album. With a European tour starting very soon, things are looking optimistic for Happyness’ future endeavours. The question is, can they maintain their consistency on future albums? (8/10) (Harry Beynon)

Listen to Write In here via Spotify, and tell us what you think below!