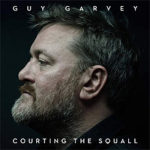 Front cover of ‘Courting The Squall’

Manchester’s Elbow have gone from cult band to Mercury-prize winning album toppers with thanks to the success of singles including ‘One Day Like This’ and ‘Grounds For Divorce’. Whilst their chart success has not alienated their diehard fans or watered down their charm, frontman Guy Garvey has found his own personal success not just as musician, but as a radio broadcaster. The progressive leanings of 2014’s The Take Off And Landing Of Everything suggested that Garvey was leaning towards experimenting with soundscapes on his first debut record, and this is indeed what has happened. Given blessing by his bandmates of 25 years, Courting The Squall is familiar ground but with darker edges, much aligned with Garvey’s appreciation of Peter Gabriel and Talk Talk frontman Mark Hollis.

‘Angela’s Eyes’ sets the tone for the record and is inspired by his newfound romance. Featuring a Fela Kuti-style Moog electronic sample, it feels like slightly uncomfortable and unnecessary, but Garvey’s gritty lyrics make up the clunky solo. A brass section features on the title single which is perfectly utilised with a rousing fanfare. ‘Harder Edges’ and ‘Unwind’ are on more comfortable ground with dreamy, string accompanied rhythms. The latter track will feel at home with fans of Elbow as it maintains a similar rolling bass groove with a floating guitar hook. Garvey’s tender lyrics particularly impress, as they do throughout the record.

The album takes a turn towards Parisian jazz on ‘Electricity’, which features saxophone solos and is co-written with American folk-blues artist Jolie Holland. The rousing spirit of Elbow is found on ‘Broken Bottles And Chandeliers’ with Garvey’s uncanny knack of portraying unsentimental romance, with the ugly bits left in. Courting The Squall is a reminder on how important Guy Garvey is as a songwriter. Though it’s sufficiently different from his work with Elbow, it’s distinctively his and obviously of a piece with his band’s output, showing off a darker element to his songwriting. There are only a few minor hiccups along the way, but overall it stands up amongst his finest work. (7/10)

Listen to Courting The Squall here, and tell us what you think below!