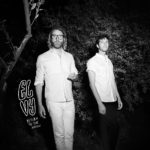 Front cover of ‘Return To The Moon’

Respectively of The National and Menomena / Ramona Falls, Matt Berninger and Brent Knopf make up EL VY, a pressure-free side project which features the baritone vocals of Berninger, but combined with a more upbeat pop sound which is a step away from his duties as vocalist of the celebrated indie masters. However, it’s Knopf’s multi-instrumentalist abilities which truly come to the forefront throughout the album. The opening title track features electronic synths accompanied by sun-drenched guitar hooks. Berninger’s vocals don’t stray far from what fans of The National are used to, and there’s an element of melodramatic darkness with which Berninger is renowned.

‘I’m The Man To Be’ has a distinctive visual element built a subversive narrative similar to Elvis Costello and Father John Mistry. Featuring soundbites and fuzzy lo-fi guitar hooks, the tracks almost wanders into LCD Soundsystem mode with prominent female backing vocals. ‘No Time To Crank The Sun’ and ‘Need A Friend’ are keys-led electro-gospel tracks and feature a different side to Berninger’s lyrical abilities. Whilst his work with The National has a serious element, this explores a comedic side alongside his slightly dour delivery. ‘Silent Ivy Hotel’ features a Tom Waits and Doors crossover featuring a ‘People Are Strange’ rhythmic pattern, backed with an organ and gospel choir. ‘Happiness, Missouri’ heads towards a darker soundscape backed by a pulsating middle-of-the-road percussion with an anxious, angsty vocal lead.

EL VY have created a solid record which spreads their wings away from their main projects. Whilst Return To The Moon isn’t the most compelling listen which can hold you for 40 minutes, it will make logical sense to fans of The National and Ramona Falls. The duo play to their strengths and there are certainly flashes of pop genius if you listen closely. (6/10)

Listen to Return To The Moon here, and tell us what you think below!