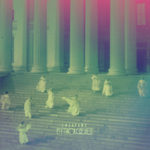 With their self-titled debut album at the start of last year, the British-Canadian four-piece Cheatahs displayed the kind of trans-Atlantic vision for shoegaze and noise-rock that you would expect from their international make-up. A mixture of the American road/death-trip drone rock you hear from the likes of Wooden Shjips and the melodic fuzziness we’re accustomed to on this side of the ocean, Cheatahs demonstrated a keen understanding of the genres they were trying to revive. Mythologies arrives less than 18 months later, and attempts to push the boat out a little further this time around. They do this by adding in traditionally foreign elements to the mix – krautrock rhythms, distressed, corroded keyboard sounds and even more feedback – and it mostly succeeds.

First track ‘Red Lakes (Sternstunden)’ pretty much picks off where Cheatahs left off, sounding like modern update of the template laid down by My Bloody Valentine, with swirls of reverb and fuzz billowing out to fill every available space. There’s a heroic guitar line encased in the fog of ‘Channel View’, which starts off at a trundling pace before picking up speed in the middle. Nathan Hewitt’s disconnected vocals about “just sitting here watching TV…  it’s just a wild symmetry” are pretty much par for the course, but they aren’t the main attraction here, turned down and just about audible amid the noise. There’s the ghost of something just a little more complex lurking in ‘Freak Waves’, but the opening salvo contains few surprises.

As Mythologies goes on, Cheatahs begin to show real signs of progression, and it’s in the second half that it really comes alive. The warm, sighing keyboard sounds of ‘Signs To Lorelei’ signals this shift, and the driving Krautrock and 16-bit computer game effects of the thrilling ‘Su-Pra’, the album’s lead single, is a career highlight for the band, and this is followed by the equally brilliant ‘? (Murasaki)’. A sublime, deeply evocative track, garnished with piercing, whistling synths which sound like keyboards generating feedback, it’s utterly transcendent. On ‘Mysteci’, the guitars are treated to sound like they’ve been scraped roughly. Cheatahs’ willingness to tinker with their equipment to produce such interesting sounds is most promising. Elsewhere, they simply decide to double down on the sound of their debut, and the results are just as impressive. The even denser fuzz, if such a thing was possible, of ‘Colorado’ sounds like Kitchens Of Distinction on speed; and the poppy key changes of ‘Hey, Sen’ achieve the weird balance of sounding doomy yet ecstatic at the same time.

Cheatahs pass the ‘difficult second album’ test easily, but it ultimately translates as a snapshot of a band in the middle of a transition, rather than having completed it. There are no weak tracks to speak of, though some moments, such as ‘In Flux’ or the straight-up aping of Spacemen 3 on ‘Deli Rome’, are rather more faithful to the tried-and-tested traditions of the noise-rock genre than others. It’s as eminently solid and enjoyable as their first, but with a small handful of moments that truly showcase Cheatahs operating at full capacity, Mythologies shows a potential new way forward for the genre. (7/10)