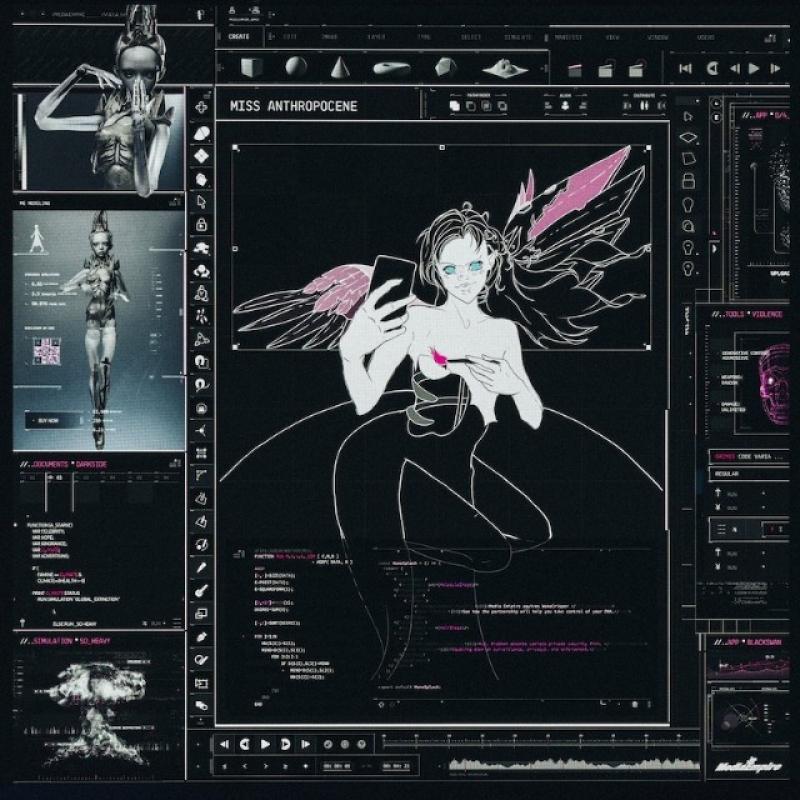 It seems that recently the world has been keeping a keen eye on Grimes, watching and waiting for five years since the release of Art Angels in 2015 that made Claire Boucher into a bona-fide star. In 2016 we had the brilliant video for ‘Kill V. Maim’to sate our appetites, but, of course, we wanted more. In 2018 we were given a peak into her personal life with the debut of her relationship with tech mogul Elon Musk; later that year we were given the stand-alone ‘We Appreciate Power’. Now, in 2020, we can finally rest. Miss Anthropocene, Boucher’s fifth Grimes album, attempts to personify climate change – as the Canadian producer has stated on Instagram and in interviews, she “wanted to make climate change fun”, and also taking to social media to assure that “each song will be a different embodiment of human extinction as depicted through a pop star demonology”. It certainly establishes the context for an interesting album.

‘So Heavy I Fell Through The Earth’, styled byGrimes herself in an interview with Apple Music as “hard Enya”, is a song about her pregnancy and the loss of self that comes along with it. “I had a vision, a weird dream where I was just sort of falling to earth, like fighting a balrog,” she said. “I woke up and said ‘I need to make a video for this, or I need to make a song for this’. It’s sort of embarrassing, but lyrically, the song is kind of about when you decide to get pregnant or agree to get pregnant. It’s the weird loss of self, or loss or power or something.” ‘Darkseid’ sounds like it was made for a fast fight sequence between two sci-fi warriors, a large section of whose lyrics are delivered almost fleetingly by Taiwanese rapper ‘潘PAN’ (previously Aristophanes) over slow, doom-like bass.

A number of tracks on Miss Anthropocene are heavier and embody more gloom than on some of her previous works such as 2012’s Visions or 2015’s Art Angels for example, but one particular song that stands out amongst the kind of musicality you would expect from this artist is recent single ‘Delete Forever’. Whilst lyrically is has quite a heavy theme, it’s sonically sterile, and the production is simple. Its clean sound gives it a certain sensitivity, especially when you employ the knowledge of what the song is about (“flew into the sun / fucking heroin”). ‘You’ll Miss Me When I’m Not Around’ has a similar feel in its minimalism. Compared to a lot of things in Grimes’ catalogue, this holds hands with ‘Delete Forever’, though it’s not without its high-pitched fluctuating vocals and that classic distinctive, soft and sometimes seductive doll voice that comes almost tied to Boucher.

‘Before The Fever’ is about “literal death” – “This is the sound of the end of the world”, Boucher croons with an almost deepened voice, a possible nod to our impending doom. Not to speak for everyone, but this could definitely be my personal end anthem. It helps brings to an end an all-round solid album, and one which falls just short of the ground-breaking nature of her last two full-lengths. Miss Anthropocene is surprising in a few ways, but not in terms of quality or production – Grimes fans around the world would have expected it to be nothing short of fantastic and ripe with bangers, and it is. But it’s revelatory and novel in the respect that there are more sensitive, autobiographical and intimate elements to what we have seen from Claire Boucher before, making for an album that can be pored over and pulled apart in a different sense. (8/10) (Rebecca Corbett)

Listen to Miss Anthropocene by Grimes here via Spotify, and tell us what you think below!