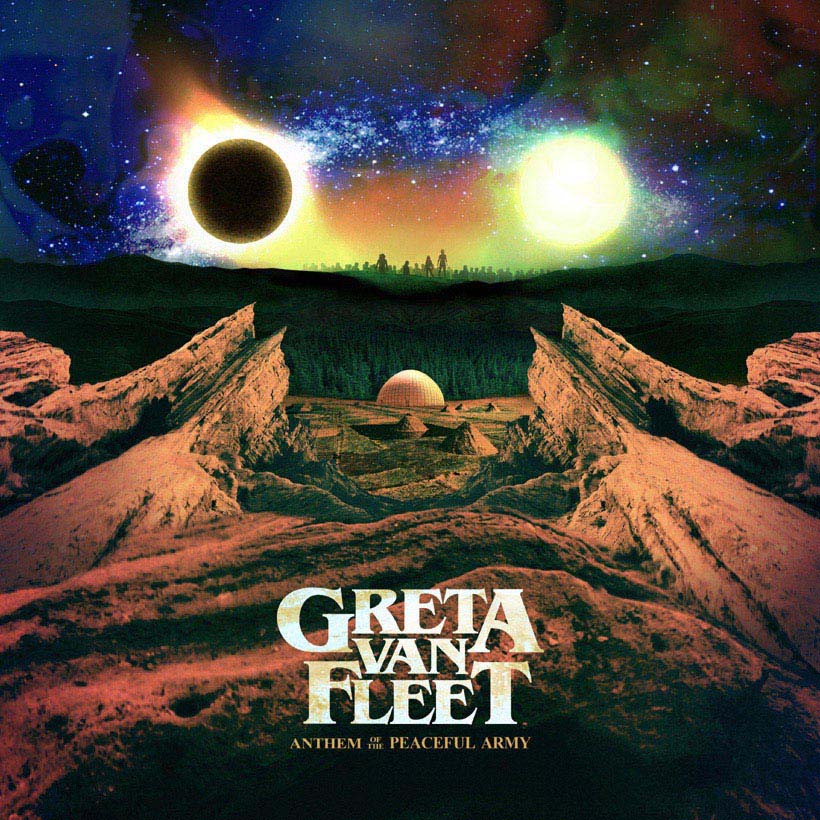 Greta Van Fleet explore ’70s rock more broadly and expertly than some critics have admitted, but ‘Anthem Of The Peaceful Army’ is a pretty shallow experience.

Michigan blues rockers Greta Van Fleet, consisting of brothers Josh, Jake and Sam Kiszka on vocals, guitar and bass, respectively, and Danny Wagner on drums, have exploded onto the rock’n’roll scene in the last year or so. Their debut single ‘Highway Tune’ topped the Billboard Mainstream Rock chart just over a year ago and heads have been turning left, right and centre ever since.

Young ‘70s classic rock fans were especially ecstatic about Josh’s howls emulating Robert Plant and, henceforth, have been compared ad nauseum to Led Zeppelin. Ironically, Josh never intended to sound like Plant but, nevertheless, has received praise from the Zeppelin frontman himself. Plus, the band didn’t cite the band as a key influence but will happily take the label any day of the week. As well as classic rock, Greta Van Fleet have looked to blues, soul, funk, jazz and even wold music as sources of inspiration. Now that their full-length debut Anthem Of The Peaceful Army has been released, titled after a poem that Josh wrote on the band’s tour bus, it seems that GVF are pulling out a bit more than just Zeppelin from the ‘70s rock catalogue.

READ MORE: ‘Don’t Tell Me You Guys Have Never Gotten The Led Out?’ – A Beginner’s Guide to Led Zeppelin

For example, the six-minute opening track ‘Age Of Man’ that embraces the progressive rock styles of Yes with a beautiful, melodic fade-in intro followed by Josh’s seemingly Jon Anderson-esque vocals and a catchy guitar riff from Jake. As the song progresses, Josh’s vocals quickly evolve into sharper and high-pitched screams. A rather unprecedented beginning to a GVF album, given what listeners have come to expect from them. But that doubt is instantly shattered by the ‘The Cold Wind’ and the album’s funk-infused lead single ‘When The Curtain Falls’.

The former mirrors the rock’n’roll nature of very early Rush, especially their eponymous debut, before they became prog rock icons. Meanwhile, ‘When The Curtain Falls’ is fizzing with the group’s ‘70s rock panache: Jimmy Page-inspired staccato riffs, exuberant basslines, free-flowing drum fills and shrill vocals. But as the listener delves deeper into tracklisting, that panache is attention-grabbing for only so long.

Jake incorporates a lap steel guitar on ‘Mountain Of The Sun’ and produces these slick and steely guitar slides. On the contrary, the chorus is corny to say the least: “I’ll make you mine / You’re my sunshine / I’ll make you mine / You’re my sunshine”. This problem also crops up on ‘You’re The One’ with “You’re the one I want / You’re the one I need / You’re the one I had / So come back to me” – there is nothing original or impressive about some of these lyrics. Compare that to the wisdom instilled on the second verse on ‘Age Of Man’: “A beauty lives in every soul / The more you love the more you know / They pass the torch and it still burns / Once children and it’s now out turn”. ‘Age Of Man’ is arguably the greatest track on this album but is closely followed by the penultimate track and ballad ‘Anthem’ along with ‘Brave New World’, where Jake’s guitar evokes a darker, but refreshing, tone.

‘Anthem’ is GVF’s answer to Uriah Heep’s ‘The Wizard’ where Josh now suddenly sounds like Mick Box. This interchangeability is quite striking if one listens closely. Presumably, the pre-chorus talks about the close-minded nature of today’s political and cultural discourse where people only hear, or want to hear, one side of the story: “Your opinion only knows one thing that you seem to want the most / And you chose / To save yourself in your own time”. “You’ll have to stay and open up your mind” means we should observe all aspects of every story.

It seems that Greta Van Fleet have split music fans into two key viewpoints: 1) They are just a Led Zeppelin tribute band and shouldn’t be taken too seriously and 2) They are just four guys from Michigan who are having fun and do have at least an ounce of originality. To a limited degree, the latter view is a more reasonable conclusion after one has acknowledged that GVF explore ‘70s rock more broadly than some critics will otherwise tell you. But having said that, where do they go from here? Concocting a sophomore release in a similar vein to Anthem Of The Peaceful Army will do the band no favours. (5/10) (Harry Beynon)

Listen to Anthem Of The Peaceful Army by Greta Van Fleet here via Spotify, and tell us what you think below!