REVIEW: GFOTY – ‘If You Think I’m A Bitch, You Should Meet GFOTY’ EP (GIRLFRIEND RECORDS) 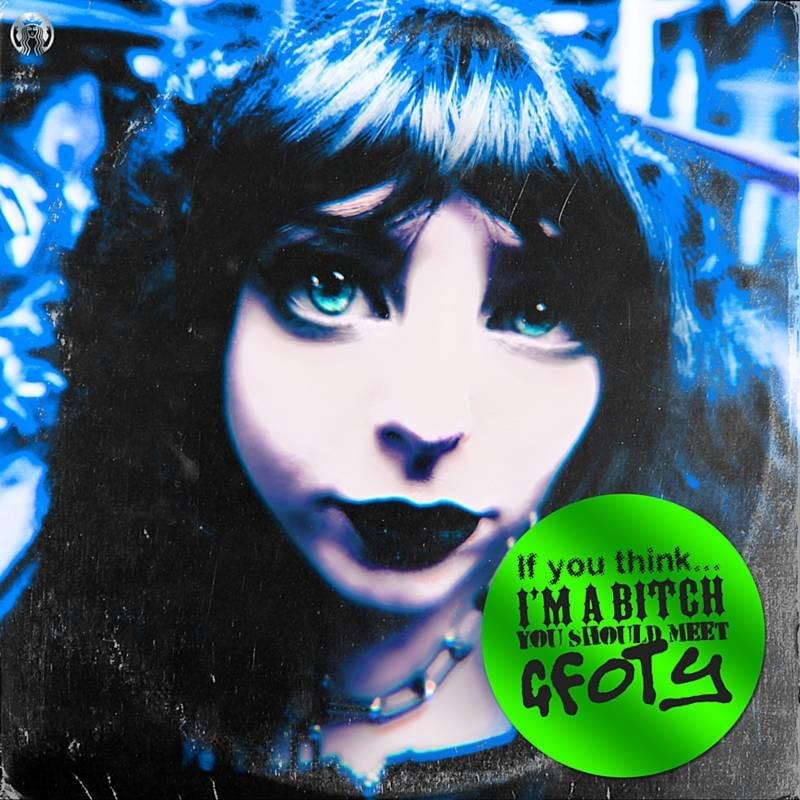 She was quite the vision in a very particular way. Her outfit was straight out of Hot Topic circa 2007, and if you weren’t aware that this is the woman behind both the concept and the sound of the psychotic pop that’s blasting through the speakers, you could easily assume that the girl on stage is just a big fan of GFOTY, screaming along to the lyrics into the mic as if she was alone in her bedroom. Yet, there she was, in all her trashy and brilliant glory – the British pop singer and composer Polly Louisa Salmon, otherwise known as GFOTY (Girlfriend Of The Year), performing a set at Wharf Chambers in Leeds last month. After disaffiliating from the PC Music label, GFOTY released her newest EP If You Think I’m A Bitch, You Should Meet GFOTY on GIRLFRIEND RECORDS, adding to the continuous lore of this cliché-turned-nightmare project of sugary yet aggressive pop music with lewd vigour.

With four highly anticipated new tracks, GFOTY continues delivering confusing yet brilliant self-referrential pop music to dance to and gawk at. Crudely narrating the quick flame between GFOTY and the Boy Next Door (someone we all are deep down inside, according to her), the four tracks see the romance spark, side-eye the disappointing hook up as it happens, and document the fallout between the two, all in under 12 minutes. Produced by Count Baldor, the EP offers a more consistent story of who the lizard-brained (on this later) character of GFOTY is in a very Noughties pop, Eurodance-inspired record.

On that note, some crucial context must be given on GFOTY’s sound to fully embrace the stylistic ‘trashiness’ that is If You Think I’m A Bitch, You Should Meet GFOTY. Whilst on the London-based experimental pop and electronica label PC Music, the majority of GFOTY’s musical output, most notably GFOTYBUCKS, was pop cliché-infused car crashes of songs, mixing the best and worst of mainstream music with filthily hedonistic yet ridiculously catchy lyrics that satirized British and American party culture and media. Condensing the essence of pop and twisting it into nightmarish experimental electronica renditions, as befitting for an artist on the PC Music label (A.G. Cook, Hannah Diamond, and the label affiliate SOPHIE), GFOTY seemingly let the worst that lies in our egoistic monkey/lizard brains just ooze out – the narcissism, the hedonistic lust and the consumerism, all alongside romantic naivete going hand in hand with downright crudeness. GFOTY lyrics are quite the gift, the best illustration to show at least a sliver of the picture being the notorious ‘Friday Night’, beloved by many because of its filth and inappropriate musical catchiness:

“Plenty of boys in the yard / One look at me and they get hard / Hard as stone, ready to bone, like Medusa on a party throne”

Confused yet? Countless discussions on whether GFOTY is ‘legitimate’ music or just a gimmick have raged online, but it’s undeniable that Polly Louisa Salmon managed to perfectly encapsulate the bottom of the barrel of our culture whilst producing peculiar yet catchy pop collages. GFOTY the character refuses to be ridiculed, she’s The Shit (so beautifully ‘basic’), she gets what she wants (a rich, hot-bod Chad, all the while dreaming about your dad) and she’s unafraid to, scarily, say whatever she wants, all of which is more than present in the newest GFOTY EP.

Referencing Justin Bieber’s ‘Sorry’ on the starter ‘Superglue’, GFOTY sets up the ending of the romance between the Boy Next Door and GFOTY – to paraphrase, he left her for someone more sexy, on a track that could’ve easily been another 2013 summer club banger (as it was – interpolation of ‘Sorry’, everyone) with its production and usage of the horn sound on synths under the signature heavily processed vocals.

Followed by the Eurodance gem and main single ‘Boy Next Door’, you’re hit with the gorgeously vapid lyrics: “Titty for lunch, Titty for dinner / Just take me out, you know I’m a winner / Vodka for days, vodka for years / We could just chat for a million years”. The undeniable Noughties pop influence on this track makes it either the best or the worst thing you’ve heard in a while, from the dramatic fade-in, the clap-like beat, to the stylized synths and bass. The track’s music video is an infomercial gone wrong, featuring GFOTY approved Boys Next Door and GFOTY herself advertising ‘Deepthroat Lozenges’, this glorious mess of visual references and inside jokes directed by Polly’s childhood friend Daddy DeVito (?!!). Watch at your own risk.

The upbeat and almost cutesy ‘Cool’ hops on the trend of including Spanish lyrics in pop songs. It’s cheeky in its mouse-y vocals, yet scary in how unabashedly it narrates the hook-up of GFOTY and Boy Next Door in classic GFOTY fashion: “I met you at a party and you were pretty cool / Me pusiste al [?] y creías que eras cool / You said ‘Come back to mine’ / And you’ll make my pussy drool”. Through several key changes the track goes manic and turns horrific, the distorted vocals and glitch sounds fizzing out just before the dreamy and almost calm ‘Sea At Night’ sets in.

Still including the artificial vocals, lyrically this closer is probably the most honest and organic track on the EP, housing a simplified but more or less realistic inner dialogue that could occur mid-relationship: “Hurt to see, but, you didn’t really know me well / Oh, I wanna see if you really wanna know me well / Baby, do you know me well?”. It’s more of the same, yet showcasing the more melodic side of GFOTY, the mood of the track more dramatic and honest than manically evil whilst perfectly doe-eyed.

Delving into GFOTY’s discography is quite the ride. It’s overwhelming, far from classy and confusingly ironic, all the whilst being hilarious and very of its time. Musically, the least one could say is that GFOTY is interesting – pulling inspiration from everything we love to hate in music, she expertly twists and morphs the worst of the best into something hideous but memorable. The EP If You Think I’m A Bitch, You Should Meet GFOTY sees GFOTY focus on more song-like structures with storyline in mind, and it’s delightful to see Polly poke, parody and satirise whilst at the same time having so much fun. This self-aware pop project sees the new age of ‘Internet music’ where your favourite dark-humoured pop-star might be an exaggerated, fake identity constructed from everyone in the pop industry, highlighting the most awful rather than the best.

The brilliance of GFOTY seems to be the refusal to take itself too seriously, leaving space for interpretation and self-indulgence, and this new EP continues said legacy with pride – strutting its awfulness proudly, telling you all the things you heard and felt before and hid it, but in such a way that, lucky to you, you’re let in on the joke. There’s much more to discuss, but as GFOTY herself said it best on the closer ‘Sea At Night’: “Thanks to the sea for giving me me / And thanks to me, for making me real / And thanks to the boys who kept me alive / Who stayed by my side, and made me survive / Now it’s time to say goodbye / From your saviour, GFOTY / Bye”. (8/10) (Aiste Samuchovaite)

Listen to If You Think I’m A Bitch, You Should Meet GFOTY EP by GFOTY here via Spotify, and tell us what you think below!