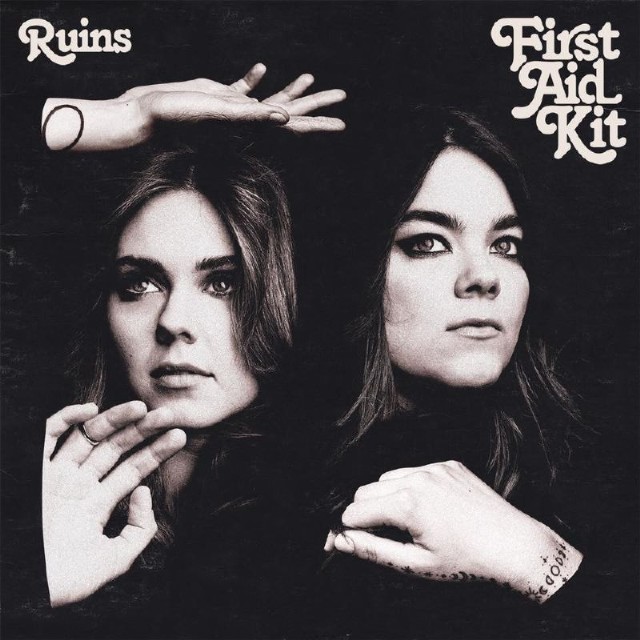 First Aid Kit’s third album ‘Ruins’ suffers from same-iness, but the Soderberg sisters are in fine vocal form and it’s a comforting, if rarely challenging listen.

Even though the intrinsic “bloody” harmonies of the Swedish Söderberg sisters, known as First Aid Kit, create a pleasurable audial pattern on their newest release Ruins, the simplistic instrumentation and vague lyrics leave a taste of old, seen and safe.

Intense touring and constant fights with each other left the Söderberg sisters exhausted. After their 2014 Stay Gold tour, crumbling under pressure, Klara and Johanna Söderberg went their separate ways to take a break. Loneliness and heartbreak ensued, as the sisters told The Times. Klara’s engagement was broken off, Johanna found herself completely alone in Stockholm for the first time. They were no longer ‘Klara and Johanna from the First Aid Kit’ – an identity they embraced for the last seven or so years, since gaining recognition for a cover of Fleet Foxes on YouTube. Reunited, together with Tucker Martine, the producer of such acts like The Decemberists, R.E.M., Iron & Wine and Sufjan Stevens, they crafted third album Ruins, full of archetypal folk musings on love, the road, postcards and self-searching monologues.

Ruins is not an album about a breakup, but it is a breakup album. Narrating loneliness, beauty of love no longer alive and wanting to escape the mocking sunshine of Los Angeles, Ruins delivers what it promises, but sounds safe and familiar. Maybe even a tad bit too familiar, as the lyrics often fail to deliver the promised crystal clear view of the singers’ emotional innards and run on vague and typical folk phrasings. Take “But I know you truly saw me / Even if just for a while / Maybe that’s why it hurts now / To leave it all behind” on opening track ‘Rebel Heart’; “Lately I’ve been thinking about the past / How there is no holding back” on one of the brighter tracks named ‘It’s A Shame’; or “And we might have seen something / But we ain’t seen nothing yet” on closing track ‘Nothing Has To Be True’. While not necessarily untrue or unrelatable, lyrics like this, instead of bringing the listener closer to the intended emotion, seem to throw a shade of ‘heard it all before’ on the whole song, downplaying the heftiness and sorrow the words are coming from.

Perhaps this is because of artists like Sufjan Stevens and Bon Iver, whose influence seeped into the genre of folk almost accidentally but raised the bar of folk lyricism to be painfully honest and surprisingly relatable in their exhibitionistic details. Of course, there are glimpses of bluntness and unexpected lyrical brilliantness. The ending verse of ‘Rebel Heart’, even if a bit melodramatic with the “Nothing matters, all is futile”, succeeds in capturing the unconditional, giving nature of romantic relationships, while the sadness of ‘It’s A Shame’, so needed to be felt out and released, struggles against the overly cheery sun of L.A., foreign to the Swedish sisters. ‘To Live A Life’ nails the classic, but still relevant confessional dialogue of the self and their beloved with the expected “I look for you / In these empty rooms / You’re a phone call away / I’m on the interstate”, while the image of the sisters “Drinking cheap wine / Just to pass the time” makes you chuckle.

There’s an inner river of togetherness running through Ruins, as if one is never truly alone in these songs, even if the lyrics say otherwise. This connectedness is achieved with the signature honeyed harmonies of Klara and Johanna, which shine on Ruins and elevate the stripped-back instrumentation of the album. If at times the strum of the guitar could not get more simple and conventional, the melodic harmonies created by the sisters pull at the heart and attempt to brighten the shadow of the unimpressive guitar.

Whether melodically Ruins is boring or classic is hard to say because of the nature of the folk genre, as it aims to be familiar and unifying. To hit close to home. But, paired with the often vague lyrics, the musical conventionality takes the air out of the strong blow forward that Ruins could have been in the First Aid Kit repertoire. Most importantly, it lacks variety, with the pulsation of the album created solely by the harmonies of the vocals. At times, one can find a musical venture in the production of ‘Rebel Heart’, which hits closer to electronic than country, or on ‘Fireworks’, which feels more like old Lana Del Rey than Emmylou Harris, but the ventures outside folk are not consistent enough to push Ruins out of the folk/Americana album boundaries, therefore they fall flat and feel even unnecessary at times.

It’s hard to write a punch of a breakup album after artists like Bjork, Bon Iver and Fiona Apple are the ones you’re up against. Maybe First Aid Kit didn’t revolutionize folk, the breakup album or even their own sound, but they did release an enjoyable effort suitable for long road trips and introspective evenings near the fireplace. And, according to First Aid Kit, that’s enough. (6/10) (Aiste Samuchovaite)

Listen to Ruins by First Aid Kit here via Spotify, and tell us what you think below!