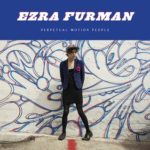 Chicago-based troubadour Ezra Furman returns with his third solo album, a highly charged record which springs from OCD, sexuality, religion and alienation. Perpetual Motion People has everything a solid rock ‘n’ roll album should have, full of the pent-up frustrations of lonely youth, one that Furman calls ‘an album for misfits’. Having received praise from BBC6 Music’s Marc Riley (as well as many other music critics) for his 2013 effort Day Of The Dog, his new release is a mature balance between tender acoustic ballads and energetic, percussive rock ‘n’ roll.

Doused in saxophone, ‘50s-influenced backing vocals and a flurry of guitars, there’s a certain tenderness about this album in comparison to Day Of The Dog, which for the vast majority was an all-out rock ‘n’ roll party record. It paid homage to The Velvet Underground and Perpetual Motion People has more in common than ever with the sexually charged themes of Elvis and Chuck Berry. The doo-wops on ‘Lousy Connection’ perfectly represent everything that Furman is about: classic rock and pop influences but with a contemporary twist and lyrics personal to him. Piano and saxophone solos give it a sense of being angry, yet it’s easy on the ear. ‘Restless Year’ has much of the same impact and is a throwback to old-school Jonathan Richman. Most importantly, Furman’s distinctive voice make it easy to jump between genres and have the ability to build catharsis; whether it is slow or fast in tempo.

The second half of the record leans more towards downbeat gospel harmonies. ‘Can I Sleep In Your Brain’, ‘Tip Of A Match’ and ‘One Day I Will Sin No More’ all show Furman’s diverse range in influences and versatility in being able to flit between aggression and tenderness. However, his distinctive voice pulls you in with ease. The weaker moments on the record are few and far between, and even then simply remind you of his older material rather than being ‘bad’ in any way. Apart from the jangly garage rock ‘Wobbly’, the darker undertones of his previous hits including ‘I Wanna Destroy Myself’ and ‘Tell ‘Em All To Go To Hell’ are no longer as obvious and are more discreet. Perpetual Motion People will give you a forty minute ride of classic rock ‘n’ roll eccentricity, but it’s no way a self-deprecating album for Furman. It’s more of a calling card for the misfits of the world, a beacon for disaffected youth that echoes all the very best the genre has to offer. (8/10)