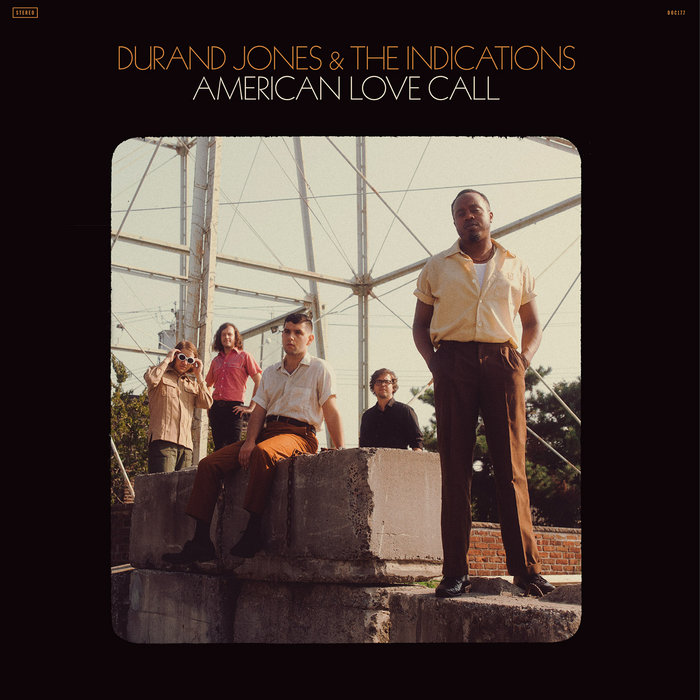 A politicised and socially aware update on their debut, full of soulful and orchestrated swells, ‘American Love Call’ sees Durand Jones & The Indications get serious.

Mining the past for inspiration doesn’t have to mean your music can’t look forward. Take Durand Jones & The Indications, for example. They met at Indiana University, with frontman Durand Jones backed with a band consisting of Aaron Frazer (drums), Blake Rhein (guitar), Kyle Houpt (bass) and Steve Okonski (keys). They bonded over old Seventies soul records which consequently became so engrained in their music and aesthetic. Their eponymous 2016 debut was quaintly retro and nostalgic of that era’s heavyweights, including Curtis Mayfield, Al Green, Bobby Womack, The Delfonics and The Impressions, right down the deliberately stylised artwork and presentation.

While that record was simply a first step in the process, American Love Call feels like an album with a clearer direction and sense of purpose. The production is cleaner and more in keeping with the times, if you will, and the music is a blend of soaring falsetto vocals; soothing piano and organ passages; and groovy rhythms from the drums, guitar and bass that amalgamates to a superabundance of soulful joy. The funky ‘Long Way Home’ sees Jones’ vocal talents shine through and the bright sheen layered on the guitar melodies on ‘Walk Away’ is very satisfying. ‘Listen To Your Heart’ evokes a more R&B approach because of the way Jones’ lyrical patterns are structured around the song’s rhythms.

But it sounds as though Durand Jones is not the only member contributing to vocal duties. Frazer nailed his lead vocal performance on ‘Is It Any Wonder?’ from the debut and appears to do so again on the penultimate track of American Love Call ‘How Can I Be Sure’. ‘Too Many Tears’ is the five-piece’s answer to Al Green’s soul staple ‘Let’s Stay Together’ with Houpt’s basslines inducing a Seventies soul vibe. The opening track ‘Morning In America’ has a contemporary yet timeless socio-political undertone with “Congressmen in Washington / Receive their brief and brew / While lead, it fills the pipelines / In a Detroit county school” signifying a broken political system. ‘Circles’ centres more on a broken relationship: “What am I but just a fly on the wall to you? / Why do I try? I’m just another guy to you”.

In conclusion, American Love Call is a fantastic sophomore effort from Durand Jones & The Indications that highlights why fans of old soul music are excited about them. Whether they are capable of anything more than (admittedly very convincing) revivalism in the long run, however, is another matter to be decided. (7/10) (Harry Beynon)

Listen to American Love Call by Durand Jones & The Indications here via Spotify, and tell us what you think below!