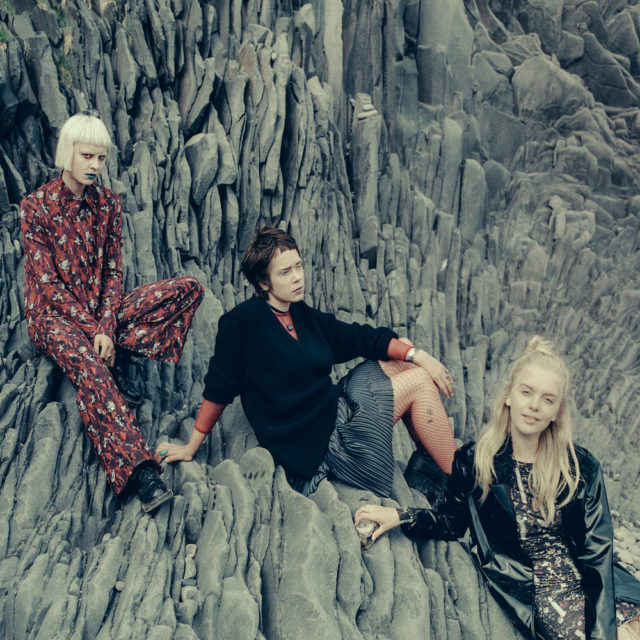 Dream Wife’s latest single ‘Fire’, padded out to an EP with previous release ‘Somebody’ and three new remixes, only makes the prospect of a debut album even more exciting.

Fire is the latest EP release from the conveyor belt of great singles from modern-day Riot Grrrl three-piece Dream Wife. This is a band that have so far released nothing that disappoints, sitting somewhere between the Spice Girls and Bikini Kill, Dream Wife consistently release completely danceable tracks whilst addressing important and controversial issues within their lyrics. Vocalist Rakel Mjoll’s soft voice leads you in like a siren but her lyrics have enough bite to leave you bleeding, and her voice teamed with the guitar of Alice Go and the bass of Bella Podpadec work to create the distinctive Dream Wife sound.

‘Fire’ is the title track and works well to set up the EP. It cannot be disputed that it is a great track, but lacks some of the impact of its live recordings – but, to be fair, that can be said of most music, right? Alice’s guitars instantly alert us that we are listening to Dream Wife with her unmistakeable sound and style. Really, ‘Fire’ includes everything that you want out of a great song – it’s musically impactful, the chorus is catchy, and as soon as it finishes you want to hear it again.

The second track on the EP, ‘Somebody’, was initially released on International Women’s Day back in March and offers us a sarcastic but serious comment on the issues of rape culture, slut shaming and victim blaming that, unfortunately, are still phenomena that are all too common in today’s society. Although it may be a bold statement, ‘Somebody’ is to 2017 what Kathleen Hanna’s ‘Rebel Girl’ was to the 1990s. Dream Wife slam the objectification of women with a feminist chant of “I am not my body I’m somebody” and stress just how difficult it is for victims of sexual assault to find peace and become themselves again.

The EP also includes three remixes of ‘Fire’, all of which sound like 4am in their own way but ultimately do not compare to the song proper. The EP as a whole does not disappoint and if Dream Wife carry on as they are doing we can only expect even bigger things from them in the future. (8/10) (Jesse Casey)

Listen to Fire (Remixes) EP by Dream Wife here via Spotify, and tell us what you think below!