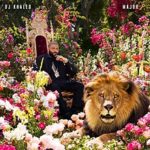 A producer to the stars and internet sensation in his own right, DJ Khaled is, without a doubt, a product of his generation; after rising to fame via Snapchat and becoming a glorified meme, Khaled, who in Major Key is releasing his ninth full-length effort, is closer to the mainstream than ever before. Sadly, the battle between irony and talent is won by the former making for a comically stereotypical album.

The fact that Khaled even made it this far is a testament to his durability and Major Key sees Khaled mixing with the stars more than ever before. Opening track ‘I Got The Keys’ features Jay-Z himself, but as the case with most of the album it feels ironic as the track hits every stereotype possible; staggeringly repetitive and a truly infuriating beat mean this track can never recover – even with one of Hova’s most profound lyrics in years (“How we still slaves in 2016?”).

‘Do You Mind’ is a similar story; Nicki Minaj delivers her most beige verse to date – in the past she was insightful, even recently she was annoyingly catchy, but this just feels tame and as if Khaled has simply got Minaj in for her name alone (the brilliance of her stating “He got Nicki, he know he hit the jackpot” is almost too much to handle). This is all before the renowned feminist Chris Brown takes over with his ever-insightful lyrics (“You know, you know, you know, you know / He ain’t got forever and ever / You know, you know, you know, you know / Let me be the one, baby you deserve better”. Sigh). During a time where we are seeing some of the most important rap albums in years, this just has no purpose today.

The fact that there are 32 features on this record is too much handle and at times it really does feel like Khaled has taken on too much. ‘Fuck Up The Club’ has a decent enough beat and the Rick Ross bars feel refreshingly tongue-in-cheek, but the Future hook with Auto-Tune galore takes away from all of this.

Major Key’s very few redeeming features come when it is kept simple, and the guest spots are kept to a minimum. ‘Jermaine’s Interlude’ is a laid back and reflective piece that stands out for the fact that nothing is forced down our throats (and even that is only borderline true by the end). The same can be said for ‘Nas Album Done’, a simplistic drum beat allows Nas to do what he does best and when given the opportunity he duly knocks it out of the park.

Alas, this isn’t enough to save Major Key. Nothing could, in fact. Khaled has tried to make a series of radio/club hits, and I have my fingers crossed that this won’t happen because I can’t think of many things worse than walking into a club and hearing something from this album. Major Key is like a reflection of everything that could be wrong with a genre; it’s a flash in the pan, lazy, repetitive (I swear nearly every track begins with a random shout of “DJ Khaled” or “Major Key”) and fundamentally generic and unsubstantial in beat and lyricism. Avoid at all cost. (2/10)

You can listen (if you must) to Major Key on Apple Music. Tell us what you think below!