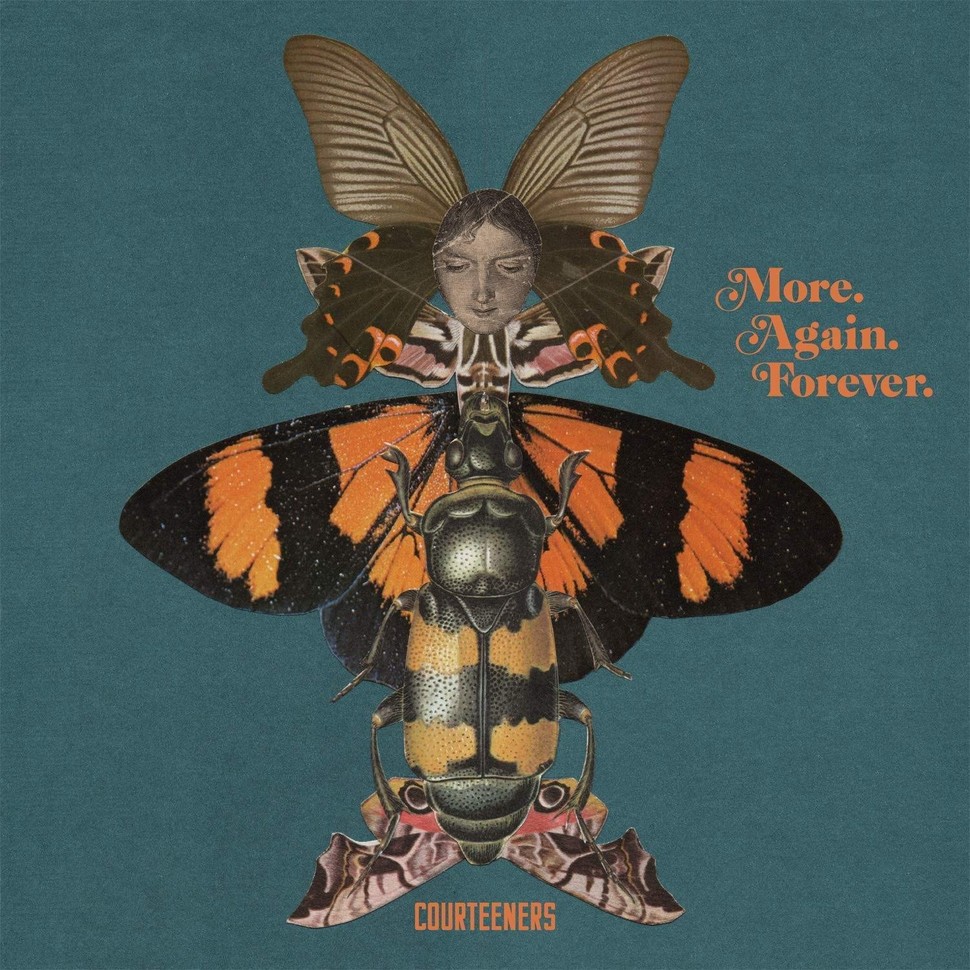 It’s been well over a decade since Manchester-based Courteeners released their debut album St. Jude, a focussed if overly slick collection featuring the unmistakable hit ‘Not Nineteen Forever’, and straight away they managed to develop a reputation that has attracted both admiration and derision, one which they’ve never quite shaken off. The expression “lad rock” seems to have been invented especially, and perhaps derogatorily, for bands like Courteeners. As it happens, if you were to type their name into the Twitter search bar, you would be guaranteed to come across the phrase “Dark Fruits” within 60 seconds.

Is any of this relevant though? Ultimately, what does it say about Courteeners themselves? If anything, it merely affirms that Liam Fray and co. have a very specific, tightly-knit, yet extremely loyal fanbase, who stick with them through thick and thin, eagerly anticipating any new releases and welcoming them with open arms. And when it comes to More. Again. Forever. the reception has been no different.

This is nonetheless surprising, considering that their previous effort, 2016’s Mapping The Rendezvous, marked a discernible change in style, embracing a dance-rock aesthetic through which the band attempted to broaden their horizons. Furthermore, this approach has bled over onto this release, with tunes such as ‘Heart Attack’ and ‘Previous Parties’, despite sounding uncannily similar to each other, being built upon fuzzy, danceable guitar riffs that would undoubtedly go down a storm in the live arena.

The diverse nature of Mapping The Rendezvous has also been carried over here. A prime example would be the intriguing sitar effects during the pre-chorus of lead single ‘Heavy Jacket’, a track that certainly constitutes one of the record’s more memorable moments, despite leaving a sense that something is lacking, probably due to the chorus merely consisting of the lyric “Heavy jacket, heavy jacket, heavy jacket, come on” repeated numerous times.

Nevertheless, it’s where the band take a stab at more heartfelt material that the album’s highlights lie, specifically the one-two punch of ‘Better Man’ and ‘Hanging Off Your Cloud’. The former is a Decemberists-esque, mandolin-led slice of indie-pop that feels like a breath of fresh air, its comparatively stripped-down arrangements contrasting with the overproduction with which the rest of the album is mildly tainted, whereas the latter is a strings-laden piano ballad that would almost definitely have achieved chart success 15 years ago. Whilst neither are necessarily ground-breaking works of art, they fundamentally serve as a reminder that Courteeners are not a purely one-dimensional guitar band.

Other moments worth mentioning are the title track, with its groovy bassline and new wave-inspired chorus, and the energetic ‘Take It On The Chin’, which effectively combines the band’s post-punk revival roots with an infectious pop sensibility and moderately humorous lyricisms, such as “I’d rather be in the dentist’s chair with Sir Paul Gascoigne in the summer of ‘96”. The only apparent lowlight is the damp squib that is ‘One Day At A Time’, with its generic chord progression that one would expect from a James deep cut.

More. Again. Forever. is sufficiently experimental to keep the die-hards on their toes, though almost certainly not enough to convert the haters. It has one foot in the past and one in the present, and when you’ve got such a dependable fanbase backing you up, there’s no reason to believe that this is not a winning formula. (6/10) (George McKenna)

Listen to More. Again. Forever. by Courteeners here via Spotify, and tell us what you think below!