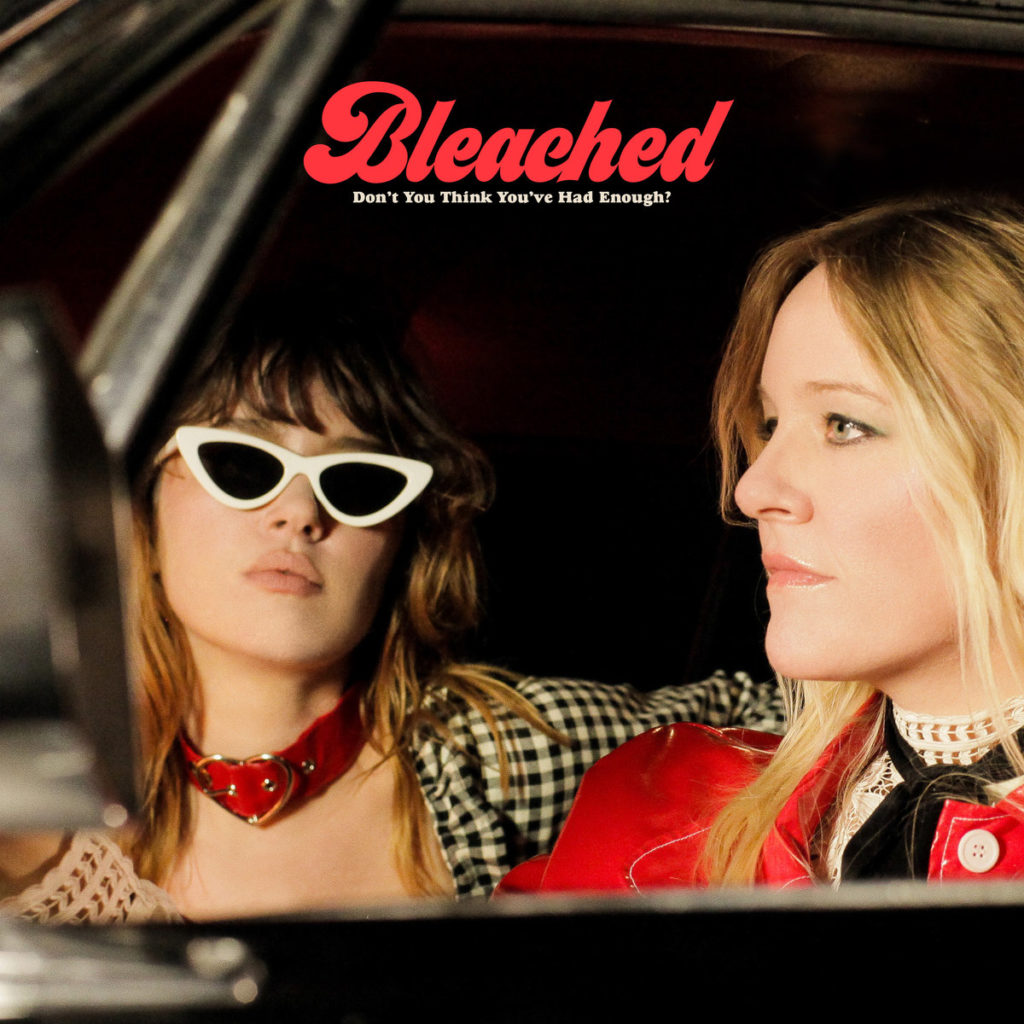 The Clavin sisters reckon with getting sober on the compelling third Bleached album, ‘Don’t You Think You’ve Had Enough?’

“I felt like I was drowning in my pain but was into it. Then I would go to the desert and reflect. I would write songs about it. I eventually realized I had to stop drinking and doing drugs. It was a really unhealthy cycle of drinking and partying. In Los Angeles, it is really easy to get sucked into that lifestyle,” said Jennifer Clavin of the female rock duo Bleached in an interview with Phoenix New Times back in 2017. Since they recorded their previous album Welcome The Worms three years ago, Jennifer and her sister and bandmate Jessica are now in a state of sobriety. The title of their newly released third album Don’t You Think You’ve Had Enough? reflects on the impact of their lives brought about by becoming sober and letting go of the toxic elements of their pasts.

In a press release Jennifer also said, “Writing these songs while sober became somewhat of a spiritual experience”. Bleached are usually known for their bare-bones mishmash of garage rock and punk. This mindset is still in control on the new album but there is an overtly sharp increase in attention to detail with regards to the instrumentation, songwriting and production value. Furthermore, the band also experiment with Eighties pop and new wave sounds, possibly trying to culminate a fresh outlook and identity for themselves.

‘Heartbeat Away’ opens with drums instigating the swaying tempo of the song with the guitar chords following suit. What this song needed, however, was perhaps more volume and drive from the guitars to let the listener know that Bleached are livelier than ever before. “I crawled my way to the top of the hill / But man, I long for the valley still / The sweet below is all I’ve known / But it’s only a heartbeat away” encompasses the struggle that the Clavin sisters have undergone whilst tackling their addictions but, in the end, there was a light at the end of the tunnel. Following this, the fabulous single ‘Hard To Kill’ opens with very catchy, clear-cut whistles and poppy, danceable guitar chords reminiscent of Bowie’s Let’s Dance album.

Don’t You Think You’ve Had Enough? is an album that keeps the listener guessing which provides a satisfying amount of unpredictability. ‘I Get What I Need’ resembles similar patterns and tones to The Clash’s ‘London Calling’ and ‘Somebody Dial 911’ pushes the Eighties pop milieu to the fullest on this album. One can imagine the likes of The Smiths performing this song with a plush, Marr-esque veneer and vocal arrangements that Morrissey could get on board with (although the lyrics aren’t quite as sardonic as his were).

But this wouldn’t be a true Bleached album without some good, wholesale garage punk which is offered in large doses at the tail-end of the album’s tracklisting. ‘Valley To LA’ and ‘Awkward Phase’ sees the sisters remembering back to their more innocent, awkward and embarrassing, but nonetheless fun, teenage years with “Backyard parties where we’d dress like boys / ‘Operation Ivy’ was our drug choice / My friend’s band’s playing at their lockout space” (‘Valley To LA’) and “We made it through the teen awkward phase / I got some pictures I don’t wanna explain / And I won’t share for fifteen seconds of fame” (‘Awkward Phase’). The album concludes with ‘Shitty Ballet’ where the sisters’ vocals harmonise beautifully and the moment where the guitars transition from acoustic to electric is powerfully hard-hitting.

In many respects, this album is an exemplar female rock album where the performances from the Clavin sisters never let up, both vocally and instrumentally. The only criticism worth mentioning is the tone of the guitars which, to make the album more omnipresent, perhaps required a denser and edgier coating. Other than that, the exquisite production, experimentation with pop music and focused determination makes Don’t You Think You’ve Had Enough? the finest Bleached album to date. (7/10) (Harry Beynon)

Listen to Don’t You Think You’ve Had Enough? by Bleached here via Spotify, and tell us what you think below!