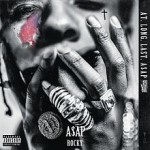 As the member of the A$AP Mob with the highest media exposure by far, A$AP Rocky has publicly stated that he wants his second album to signify “the return of the God MC” in wider rap music – presumably why the acronym for his new album At.Long.Last.A$AP sounds like ‘Allah’, rather handily. Real name Rakim Mayers, he’s presented himself as a jack-of-all-trades, dabbling in fashion, acting, directing and generally being a cultural curator with a number of social media art stunts following the success of his first proper album Long.Live.A$AP (2013). But during the making of follow-up ALLA, he had to mourn the death of his mentor and founding Mob member A$AP Yams, who died of an overdose in January and who was an executive producer on this record, and a key sculptor of Rocky’s image. This is one of the main factors in explaining this record’s sparse and overcast feel, in addition to the production being done by Danger Mouse – aka. Brian Burton, of Gnarls Barkley and Broken Bells fame – who brings this aesthetic to almost everything he does.

Despite a flurry of guest stars – everyone from Kanye West to Rod Stewart turns up – things are generally a bit more introspective and personal than they were last time. We get great chasms of atmosphere audible through Danger Mouse’s minimalist soundscapes, like the melancholic strings of ‘Excuse Me’ or the worksong feel of opener ‘Holy Ghost’, which attacks the Christian clergy and sees Rocky assert his own search for spirituality (“I’ve got my own relationship with God”). Early highlight ‘Fine Whine’ lays low, consisting of little more than a menacing bass rumble, until a tribal beat kicks up in the middle. Other tracks are shorter and sharper, like the two-minute ‘Lord Pretty Flacko Jodye 2’ or ‘L$D’, though the latter is an unfortunately forgettable ode to psychedelics. The back-to-basics ‘Jukebox Joints’, a largely sad track, switches to a more positive outlook when Kanye weighs in with his contribution. Rocky goes “when my death calls / I hope the Lord accepts collect calls”, and you instinctively worry that ALLA is going to be an entirely sombre affair.

But when he’s not exploring the healing qualities of inner headspace and psychoactive substances, he looks outwards to the world around him and lays down some gritty realities, and this balances out the first side. On ‘Max B’, which kicks off a generally livelier second half, he attacks the American system as the beats explode around him, referencing a friend who “passed away from a stray from some fake-tough guy / this should be the kind of story that makes doves cry”. The soulful ‘Wavybone’ uses the age-old hip-hop trope of money making the world go round and does an excellent job, laying some cool trumpets over the top. The R&B feel of ‘Everyday’, featuring a gnarled, sampled croon from Rod Stewart, is clearly the radio hit of the record. On the downside, there’s a distasteful, slut-shaming diss track aimed at Rita Ora, with whom Rocky had a fling last year, in the shape of ‘Better Things’ which references oral sex and is unedifying at best. However, you can skip this misogyny with judicious use of the skip function, with the collateral effect of shortening an overly long record.

Compared to Long.Live.A$AP, which felt very up-to-the-minute in terms of production, sonics and samples and aimed at securing radio airplay, ALLA is a more personal statement, with Rocky a bit more relaxed and confident in showing you his influences having established himself as a heavy-hitter. It’s hardly the return of the God MC, but is does attempt the tricky balancing act of coming off as psychedelic and street at the same time, mostly successfully. While it means there’s not much in the way of radio-friendly fare – it’s often very foggy, minimalist and elegiac – it may end up ageing a bit better than its predecessor when we look back at them in twenty years’ time. (7/10)