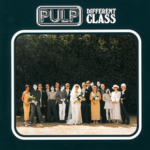 The rapid ascension of Pulp from perennial outsiders to chart toppers and festival headliners during the mid ‘90s, and the multi-platinum sales figures of their 1995 album Different Class, is the most dramatic illustration of the effect that Britpop had upon the British music scene. In pretty much no other place or time could such a band have achieved so much so quickly. By late 1995, Jarvis Cocker and his troops had become one of the most celebrated acts on the scene, but it’s worth remembering that just three years previously they were struggling to find a label to release their third album Separations, recorded in mid-1989 but not released until November 1992. But their journey from the scrubby outlands of pop to gilded superstardom owed as much to Pulp’s hard work as it did to good fortune, of being in the right place at the right time. 1994’s incredible His ‘N’ Hers at last put them on the radar, reaching the UK Top Ten, but in 1995 an incredible sequence of events propelled them into the stratosphere.

Their immortal classic ‘Common People’ was recorded and released quickly in May, a barbed satire on the phenomenon of ‘class tourism’ that Cocker had witnessed as an unpleasant undertow in the media’s coverage of the Blur v Oasis and wanted to address as a matter of urgency. It hit #2 in the UK, after which Pulp were given the opportunity to headline Glastonbury, parachuted in at short notice to fill in for the disintegrating farce of The Stone Roses. Cocker’s showmanship, coupled with the teasing of the group’s best material yet, made it an extraordinary triumph. The next single, a double A-side of ‘Mis-Shapes’ and ‘Sorted For E’s & Wizz’, also hit #2 that summer, stoking the anticipation for Different Class still further. Mixed up with all this was Cocker’s infamous mooning of Michael Jackson at the BRIT Awards that February. It became a national tabloid scandal, but the puncturing of Jackson’s ludicrously outsized ego won the hearts of every outsider and made Cocker a household name. The cover art for ‘Sorted…’, an annotated diagram of how to build a wrap, also generated controversy with The Daily Mirror’s ever-opportunistic Kate Thornton calling for the single to be boycotted with the headline ‘BAN THIS SICK STUNT’.

Different Class, with its oppositional yet cocky and confident title, was full of alternative national anthems and state-of-the-nation addresses in the vein of its lead single. The adventurous synth-based arrangements, coupled with Cocker’s theatrical performance style and sharp, incisive lyrics about sex and social class, showcased a band at the zenith of its powers that had honed its art over nearly 15 years. As a lyricist, Cocker has always been interested in the emotional and social aspect of pop. His analytical, observer’s eye for characters and situations clearly had an influence upon Arctic Monkeys’ Alex Turner, another Sheffield native, just about a decade later.

Pulp led with their best foot forward on opener ‘Mis-Shapes’, a snarky call-to-arms for social misfits, outsiders and society’s invisible people (“you could end up with a smack in the mouth / just for standing out”). The spiky, bombastic style mirrors its defiant message, and it’s a genetic code that the group had followed before and utilised for the album’s commercial moments and single releases. The anthemic ‘Common People’, with its condemnation of the sheltered middle-class protagonist slumming it as a lifestyle choice, who if she “called her dad she could stop it all”, sums up Britpop arguably more than any other song of that time. “It seemed to be in the air, that kind of patronising social voyeurism, slumming it, the idea that there’s a glamour about low-rent, low-life,” said Cocker the following year to Q magazine. “I felt that about Parklife [Blur’s 1994 album], for example, or Natural Born Killers, there is that ‘noble savage’ notion.”

‘Disco 2000’, another spectacular single, follows very closely behind in any such list, a reminiscence on a teenage crush now grown up. Intelligently, Pulp had the foresight to remove the song’s synchronisation rights to prevent advertisers using it in 1999 and 2000 – we’d all have become totally sick of it otherwise! ‘Sorted For E’s & Wizz’ was an arresting snapshot of the inevitable downside of hedonism, a cautionary tale that provided a peek at what was to come with the group’s next record This Is Hardcore. The acrobatic vocals of the gloriously pervy voyeur’s anthem ‘Underwear’ didn’t even get a single release, yet made it onto the group’s 2002 Hits record.

But just like the British society that the album analysed, Different Class had a dark, seedy underbelly. The psychodrama of ‘I Spy’, a class-influenced revenge fantasy directed at a complacent suburbanite from Cocker’s imagined past (“this is a story of haves against haven’ts / and I just happen to have what you need”), is one of the ugliest and yet most compelling moments on any Britpop album, continually overlooked in Pulp’s canon, soaring from the most intimate of beginnings to a widescreen finale. ‘F.E.E.L.I.N.G.C.A.L.L.E.D.L.O.V.E.’ follows a similar pattern, only it operated in the realm of reality rather than fantasy. Cocker’s protagonist is possibly on the edge of losing his virginity, and is detailing (or recounting) every single little detail “right down to the broken handle on the third drawer down of the dressing table”.

For every sexual or revenge fantasy like these, the album is leavened with an unabashed romantic moment like ‘Something Changed’, a string-swept moment of brightness, or the sketch-like ‘Pencil Skirt’, a sibling track to ‘Underwear’. ‘Live Bed Show’, telling the story of a loveless marriage from the point of view of a marital mattress and headboard, is another example of Cocker’s clever song construction. The closing duo of ‘Monday Morning’ and ‘Bar Italia’ always used to strike me as somehow lesser, if only by comparison to the incredible strength of the main body of the record, but do an excellent job of bringing proceedings to a close. A rich tapestry of characters and situations, both comic and tragic, is contained within, and it’s an experience that you can revisit over and over again.

Different Class is a once-in-a-career record, fulfilling the high expectations people had for it with such consummate ease that it almost wasn’t fair on everyone else. The 2006 deluxe edition digs deeper into the vault, with an essential live performance of ‘Common People’ at Glastonbury and terrific B-sides such as ‘P.T.A.’ and ‘Mile End’ (which featured on the Trainspotting soundtrack) worthy of inclusion on the album itself. Having shifted just shy of 1.3 million copies in the UK to date, Different Class is something of an oddity insofar as it’s obviously a product of its time, yet has aged remarkably well. It won the 1996 Mercury Music Prize, and is generally regarded as one of the very finest albums of the ‘90s. The NME even listed it is as the sixth greatest album ever in 2013. Pulp themselves would only make two more albums before breaking apart in 2002 – the vicious cocaine hangover of 1998’s This Is Hardcore, which startled their newly acquired audience, and the rehabilitation of 2001’s clean-living We Love Life. Those records were very good, but the British people’s memories of Pulp are inextricably bound up with Different Class and its arsenal of classic singles.