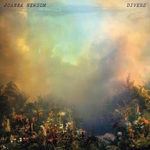 It’s been five years since Joanna Newsom released the critically acclaimed epic Have One On Me, but don’t take that to mean that she has been resting on her success; Divers is the culmination of five years of effort and it is a truly magnificent record for it. Newsom has it all, lyrical excellence to sonic brilliance: this is never more apparent than in lead single ‘Sopakanikan’. Newsom combines twinkling pianos and string arrangements that wouldn’t go amiss on a Disney film – such is their innocence and wonder – whilst delivering a mesmerising Kate Bush-style vocal and referencing Van Gogh paintings and Percy Shelley sonnets. They say that making hard work look easy is the sign of greatness, and that has never been truer than in Newsom.

Album opener ‘Anecdotes’ sees Newsom explore the dangers of attachment through time, following her 2013 marriage to Andy Sandberg, (‘Brooklyn Nine-Nine’, ‘Saturday Night Live’ and ‘The Lonely Island’) -“Sending the first scouts over / Back from the place beyond the dawn”. In addition to universal themes, Divers is without a doubt Newsom’s most accessible record to date, significantly shorter than the 3-disc blowout of her last album. There is a refreshing air of commercial (only two songs on the album last more than six minutes) in the well-crafted ‘Goose Eggs’ and ‘The Things I Say’, but there are similarities and references to prior work. Naturalistic and pastoral themes are referenced (“on the black roads of the gold fields”) continuously, showing Divers is progression, rather than a reinvention.

But Newsom is at her best when she lets go, and this is most apparent than during title-track ‘Diver’ where for six and a half minutes Newsom lets herself free as she again discusses the quandaries of long-term relationships and the constraints of time, (“I know we must abide / each by the rules that bind us here”) – with her harp in full flow and vocals reminiscent of Regina Spektor, it is a standout moment. Such is the nature of Divers that this is not the only standout moment: closer ‘Time Is A Symptom’ completes the album; from the bird calls of the morning dove, to the gradual build of the piano and Newsom’s divine vocal, before the City of Prague orchestra pushes the song into greatness.

Joanna Newsom has managed to achieve an album of true beauty even for the casual listener, but it is those who delve in deeper and analyse the layers of Divers who will be truly rewarded. Many thought it would be impossible to top her previous work, but in Divers Newsom has combined everything that has worked on previous records and made her best record yet. (9/10)