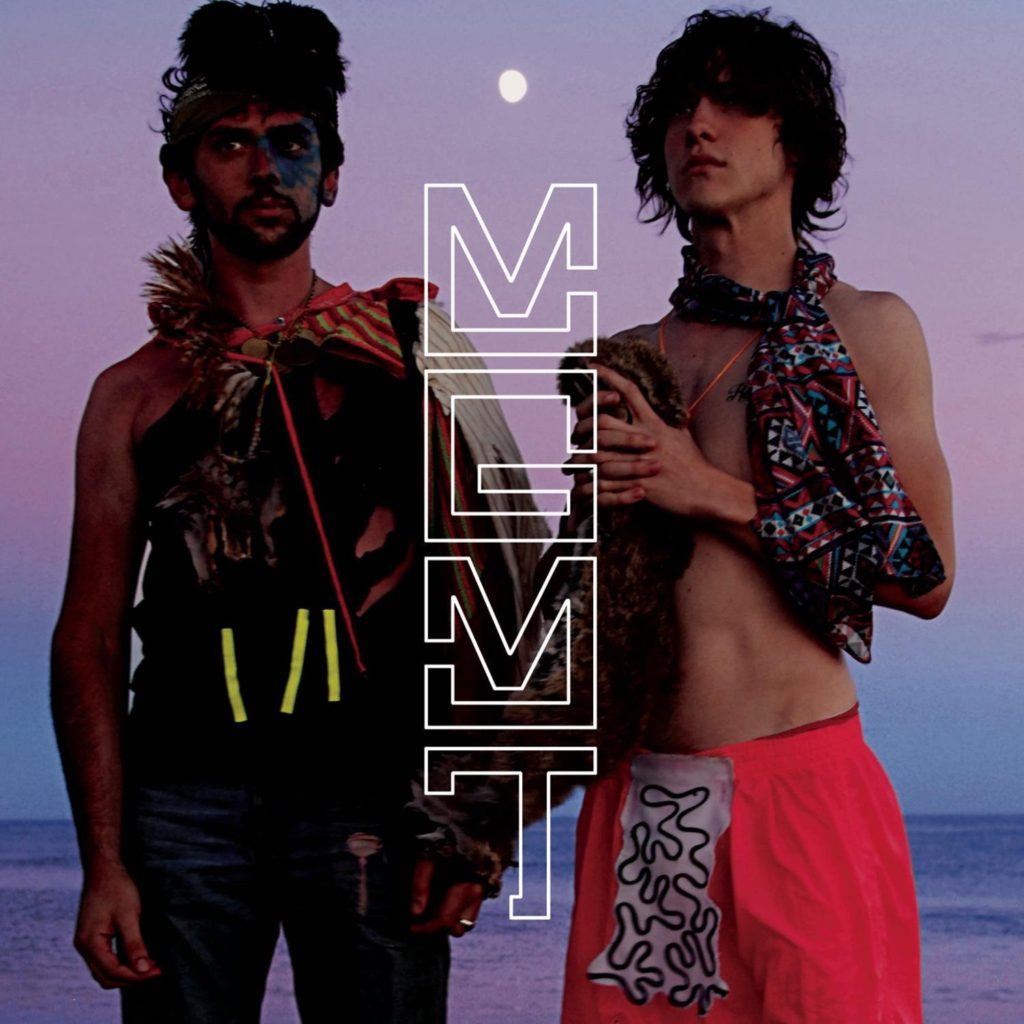 As the Noughties progressed, many pop-cultural commentators increasingly bemoaned the dearth of truly revolutionary music. With the likes of The Strokes and The Libertines taking the past as inspiration, pop music didn’t seem to be inventing a new future for itself, but was looking backwards to re-digest and regurgitate old visions. The rise of the internet, with P2P file-sharing and an instant, seemingly infinite pop archive available at just a few clicks on YouTube, seemed to reinforce this sense of history becoming cyclical rather than linear.

But this outlook was always too cynical, as well being largely wrong. The greatest albums of the 2000s tended to be fearlessly post-modern in outlook, or mined the seams and blurred the gaps between genres to produce genuinely insightful interpretations on what had come before.

Brooklyn-based duo MGMT provided a textbook expression of this new post-millennial tendency with their debut album Oracular Spectacular, an incidence of how beautifully this urge to reformulate and refract well-established influences from the past can work, if done correctly.

In love with the bombastic end of 1970s rock – David Bowie, Marc Bolan, Fleetwood Mac – and the possibilities offered by acid rock, psychedelia and garage pop – vocalist and songwriter Andrew VanWyngarden and his musical foil Ben Goldwasser came up with one of the decade’s most brilliant and memorable cross-over moments for indie, combining their knack for sublime, shapeshifting tunes with their trademark sardonic wit.

Goldwasser and VanWyngarden met at Wesleyan University in 2002, and formed MGMT more out of circumstance than actual deliberation, having bonded over music they loved and together exploring what they didn’t know. “We weren’t trying to start a band,” remarked Goldwasser during an interview much later. “We were just hanging out and showing each other music that we liked.”

The group was initially known as ‘The Management’, with two demo albums in We (Don’t) Care and Climbing To New Lows arriving in 2004 and 2005 respectively, which both contained embryonic versions of the tracks that were to eventually comprise Oracular Spectacular. Experimenting with noise rock and electronica, their esoteric and fluid style being decided upon at around the time that they eventually shortened their name to MGMT.

Having graduated in mid-2005, VanWyngarden and Goldwasser hit the road to tour what they had under their belts, gradually attracting the attention of major labels. Maureen Kenny acted quickly to secure their signatures to Columbia in late 2006 – although the band themselves freely admitted that they thought the call to say that the label was interested was initially a joke.

When Columbia then asked the duo for list of ‘dream’ producers with whom they would like to work, VanWyngarden and Goldwasser replied with the kind of offhand flippancy for which they would shortly become known, listing Prince, Nigel Godrich, Barack Obama and, apparently, “not Sheryl Crow”. To their credit, Columbia took them semi-seriously, coming back with the next best and attainable thing in the shape of Dave Fridmann – the noted producer of ‘90s masterpieces such as The Flaming Lips’ The Soft Bulletin and Mercury Rev’s Deserter’s Songs.

This turned out to be a brilliant pairing. Rather than falling in with the scuffed post-punk and art-rock revivalist sounds that many of their contemporaries were channelling in 2007 in an attempt to link their music to the past (The Strokes, Yeah Yeah Yeahs et al), MGMT stood out from the crowd, with Fridmann’s sonic wizardry and attention to detail infusing Oracular Spectacular’s ten tracks not only with grit and distinctive personality, but also a hugely radio-friendly gleam.

Just like previous masterworks that Fridmann had helped to create, Oracular Spectacular is a glamorous and entertaining production throughout. Compressed drums and layered instrumentation, topped off with shiny synthesisers, are the order of the day, as Fridmann breaks open his box of magic tricks (delay units, effects pedals, compressors and assorted weird gadgets) to help his charges land their punches to maximum effect. It turned the album into an instant classic, filled with tracks that sounded new and revelatory but, also, as if they were familiar and had existed forever.

While MGMT’s sense of ironic detachment pervades the album’s every moment, the tracks themselves and their presentation always feels sincere and carefully executed. Greeting their onrushing fame with a cynical yet humorous eye, VanWyngarden and Goldwasser were clever but not smart-alecky, and their approach was immediately appealing.

The runaway sales juggernaut of Oracular Spectacular was spearheaded by a three-pronged attack of brilliant singles. The first of these, and album opener, ‘Time To Pretend’ is one of the most memorable singles of the decade, a gorgeous concoction of distorting synthesisers, colossal drums and hopelessly infectious pop hooks. However, amid the hedonism and giddy abandon of the rhythm, there’s a sadder sense of regret, resignation and melancholy underpinning the track, just like the grimy synthesiser that rumbles underneath throughout and the tinge of orchestration heard in the background.

With lyrics like “Let’s make some music, make some money, find some models for wives / I’ll go to Paris take some heroin and fuck with the stars”, MGMT lampoon and scorn the stereotypical rock star lifestyle, and yet there’s a deeper level to their observations – perhaps the realisation that rock’s golden age was long gone and that all that their generation could do was to re-tread an already well-journeyed path, where true originality was vanishingly rare if not entirely impossible (“we’re fated to pretend”). ‘Time To Pretend’ works as a meta-commentary on ‘00s rock’n’roll culture and its incessant tendency to devour itself.

The disco-stoner haze of laconic second single ‘Electric Feel’ takes the band to a different place entirely, showing off their love of ‘70s pop as VanWyngarden gives a vocal performance akin to that of the Bee Gees’ Barry Gibb. With the production opened up and with plenty of space left in the music, Goldwasser’s latent fondness for funk can be detected in the gorgeous, flexible bass figure.

Finally, third single ‘Kids’ was like a meeting of James Murphy and New Order in heaven, and became one of the most well-remembered indie hits of the Noughties. Incredible, given it started life as a college-dorm piss-about with lyrics about childhood and remembered innocence. It remains their signature hit, its cultural life extended through multiple ad licensing arrangements and a brilliant video involving trippy monster effects, a toddler and Joanna Newsom.

Any album boasting such heavy-hitters for singles is bound to feel lopsided – indeed, Oracular Spectacular is simply not as impactful in its second half – but there are other gems scattered throughout the tracklisting. The dreamy, hippy vibes of ‘The Youth’ strike the listener as a thematic manifesto, full of changeling themes and generational statements all delivered in VanWyngarden’s effete, gentle but confident voice.

‘Weekend Wars’ is a fantastic David Bowie / Flaming Lips hybrid that sees Dave Fridmann in his element. ‘4th Dimensional Transition’ boasts some cavernous, psychedelic vocals laid upon a bpm rate that goes beyond trance-like into positively shamanic territory. The multi-segmented ‘Of Moons, Birds & Monsters’ could have come from one of Pink Floyd’s albums with Syd Barrett, showing off MGMT’s fondness for progressive rock but always keeping it shackled to a pop structure. Amorphous closer ‘Future Reflections’ ends things in a slightly muted manner.

Elsewhere, MGMT display their talents for more straightforward songwriting when the production isn’t as all-pervasive, with the Elton John-esque track ‘The Handshake’ emerging as a late album highlight, as does the surprising grit displayed in ‘Pieces Of What’.

But, while it does admittedly feel a bit front-loaded by its singles, Oracular Spectacular is an immediately accessible whole and displays an unusually diverse spread of styles, all rationalised and presented with a keen eye for detail. Were more indie debut albums to display even half of the fearlessness on show here, music would be a hell of a lot healthier.

Fuelled by its aforementioned trilogy of breathtaking singles, Oracular Spectacular turned MGMT into international stars, hugely in-demand on the festival circuits of Britain, Europe and America for the next couple of years. Their eclectic and kaleidoscopic approach to refracting their influences spoke volumes to a new generation accustomed to discovering their music online, who preferred playlists and the shuffle function to playing an album from beginning to end.

Reviews were almost uniformly positive, with one critic from Prefix aptly describing the album as “a college-dorm experiment gone horribly right”. VanWyngarden and Goldwasser could not possibly have dreamt of even a fraction of the huge commercial success that Oracular Spectacular went on to generate, shifting a combined 1.2 million copies on both sides of the Atlantic.

Under immense pressure to replicate the success of Oracular Spectacular, VanWyngarden and Goldwasser chose to dodge the bullet and came up with the altogether more difficult Congratulations in 2010, a bold album lacking singles but full of intriguing musical diversions that, truthfully, they probably needed to make to retain their sanity and sense of identity, although it cost them a large part of their audience. 2013’s self-titled MGMT followed, seeing the pair re-enter the pop world albeit with a seriously skewed outlook, and their fourth album Little Dark Age is primed for release this February.

However, ten years on, MGMT’s debut album still stands up as one of the Noughties’ finest pop crossover moments – a point at which it seemed there was a shining new future for indie.

Listen to Oracular Spectacular by MGMT here via Spotify, and tell us what you think below!