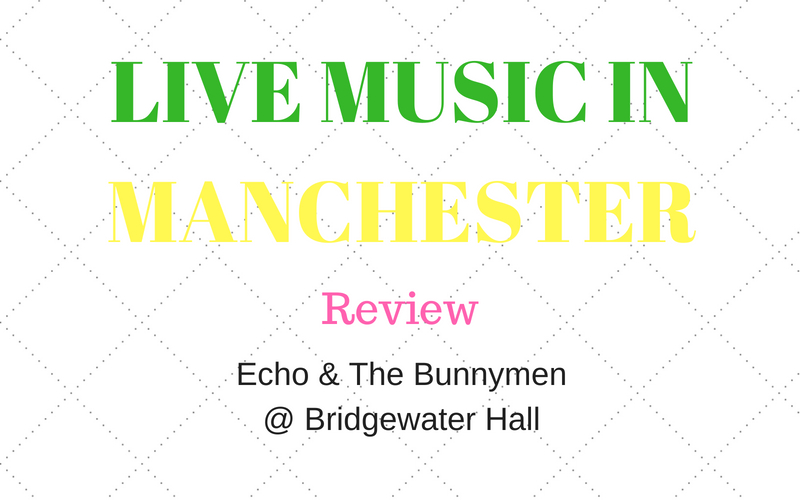 The Bridgewater Hall’s magnificently modernist grandoise was a spectacular setting for Echo & The Bunnymen to commence their Stars, The Oceans And The Moon tour. Its inner Fitzgerald glamour against the more Lowry-esque outer setting lies at the heart of the Bunnymen’s aesthetic – soaring romance set against eerie darkness.

After a somewhat stiff and shakey start, the band soon settled in. McCulloch’s voice has become gravelly with the passing of the decades, removed from the youthful croon of the Bunnymen’s heyday but not without its own charm. His lairy stage patter was generally lost to the lush reverberations of the Bridgewater Hall, although this had a great impact on the band’s sound. The drums were punchy and precise, and Will Sergeant’s unmistakable chiming guitar sound rang out beautifully.

Many of Echo & The Bunnymen’s classic hits were rearranged for the evening, as they will be for their upcoming album this October that will reinterpret the highlights of their lengthy discography. The string quartet that accompanied the band remained mysteriously dormant for the majority of the first half of their set. However, songs like ‘The Cutter’ and ‘Bring On The Dancing Horses’ were brought to life by a gorgeous sheen of strings, whilst ‘The Killing Moon’ was stripped back completely, McCulloch’s voice backed by serene piano and ghostly guitar. The new songs sounded great at the Bridgewater too, and there appears to be no search for a missing piece of history or any sense of nostalgia with the latest album. The songs sounded fresh, lively, and matured, and even had the audience singing along with the chorus of an unreleased track. The strings are at their best on these songs, threading through them like silk.

Echo & The Bunnymen’s fanbase seemed almost comically out of place in the setting. At a venue that is presumably more accustomed to reserved classical music heads and conservative applause, the Bunnymen’s audience must have seemed like rowdy punks. Come the first few notes of ‘All That Jazz’ and everyone was out of their seats, and during ‘Lips Like Sugar’ a man in the disabled section suddenly rose from his seat, dancing with crutches held aloft as though miraculously healed. In between songs there were shouts and chants, with which McCulloch inaudibly interacted. The vocalist’s stage presence was strange, as though he felt he was out of place, frequently apologising for his language but never cutting down on it. During songs, too, glances like daggers were directed at various band members, and you can’t help but feel sorry for whoever was on the receiving end of McCulloch’s Scouse wrath.

To sell out a venue such as this with ardent fans both young and old is a great testament to the Bunnymen’s enduring appeal. A band that rarely do things by halves, they went to great length to make the night special. Any Bunnymen gig will always be full of spine-tingling moments, but the Bridgewater concert really felt like a special occasion. (Louis Marlow)