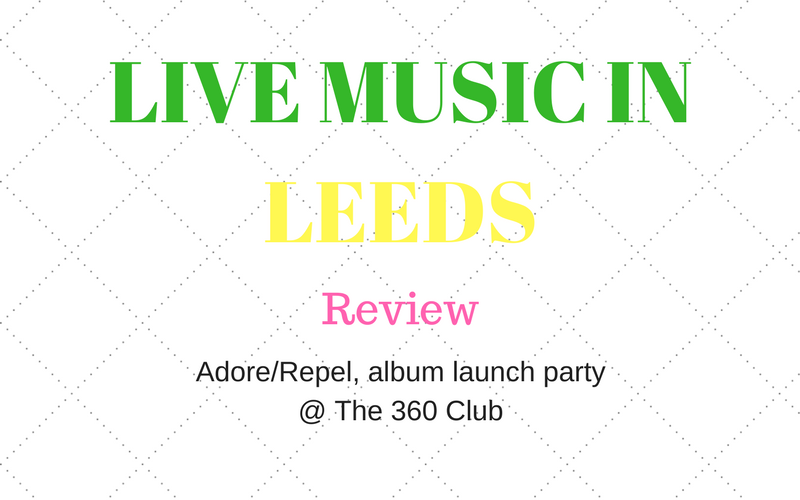 It’s not often that everything comes together in life, but that’s exactly what happened when Dewsbury natives Adore//Repel took to the stage for their homecoming gig, and launch party for their newly released debut album Empty Orchestra, at Leeds’ 360 Club.

With an air of confidence, lead vocalist Daniel Favela Brown takes to the stage with band in tow to play to the energetic ‘Intro’. A gorgeous concoction of frantic melodies take over as the crowd begin to sway and jive in sync with the music – it’s an excellent start and the audience is all too willing to “make some fucking noise” when Brown gives instruction.

The tone was set and the band never looked back. Rollicking through tracks ‘Months Ago’ and ‘Sticks In The Crow’ from Empty Orchestra the four-piece look at home on the stage despite their early years. Even fan favourite and early single ‘Youngest Wish’ gets a play with the track providing a sure-fire highlight of the set as the aggressive drums and tight guitars are ably backed by a distant lead vocal.

If there’s one criticism that can be labelled at Adore//Repel it’s that their post-rock style lacks variety and that begins to show in the middle of the set. The band’s influences from ‘90s emo and metal provide some excellent anthemic instrumentation, but the formulaic style of extended intro, into bridge, into a shouted distant vocal begins to become weary on the audience.

Still, the undoubted charisma of the band pulls the show back towards the end of their set as the glimmering tones and dynamic changes of ‘Orca’ intrigue as much as they give way to bedlam. The band close with the touching title-track ‘Empty Orchestra’; dedicated to those who have lost someone near to them, a sorrow-laden guitar develops as the percussion grows. The track becomes sharp as a terrific build allows the crowd to go wild in spite of the songs depressing topic – it’s a moment of triumph.

The band do one last lap of honour during encore ‘Where The Rich Kids Go To Die’ – there’s crowdsurfing, cheering and smiles all round from those in attendance and on stage. The guitars glide their through the track in a moment of tranquil turmoil as the band show their delight through their enthusiastic playing style. There’s still room for a hint of ‘I Wanna Be Adored’, but with that the band leave as the cheers radiate around all corners of the 360 Club.