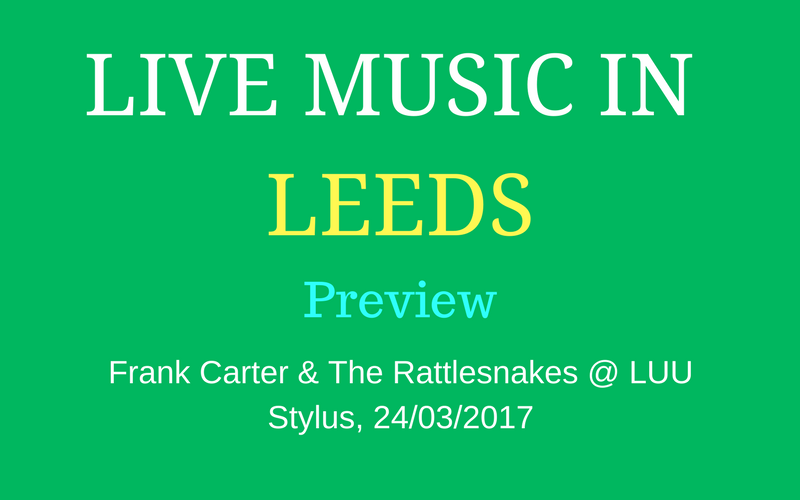 The recent release of Modern Ruin unveiled Frank Carter & The Rattlesnakes as a band who do more than just deliver heart-pounding guitar riffs or screeching vocals. Tracks like ‘Lullaby’ and the album’s title track reminded us from where they came from; but tracks like ‘Acid Veins’ and ‘Snake Eyes’ undoubtedly shows fans where they’re going.

People who’ve seen these guys live will tell you the dynamic and explosive nature of the band’s performance; particularly Carter’s. If there’s one thing that Frank Carter and his Rattlesnakes have – it’s energy. Where it comes from show after show is almost impossible to lay a finger on. In addition, Carter isn’t one to shy away from his political views either, and, considering what’s happened over this past year, he’s sure to slip in a comment here or there.

Their upcoming live show in Leeds will be their seventh stop on the Modern Ruin Tour (having already performed cities like Dublin, Newcastle, and Glasgow). With them, the Rattlesnakes are bringing acts Yonaka and Strange Bones to join the show. The former describe themselves as a ‘dark pop’ group, according to their Facebook page, that is mixed alt-rock elements. The latter are a hard rock group that seem to mirror the headliners to an extent.

The question is now what songs from Modern Ruin will the Rattlesnakes play? What will they play from their debut Blossom? Whatever their setlist may be, the crowd can expect nothing short of a memorable show at Leeds University’s Stylus next Friday.