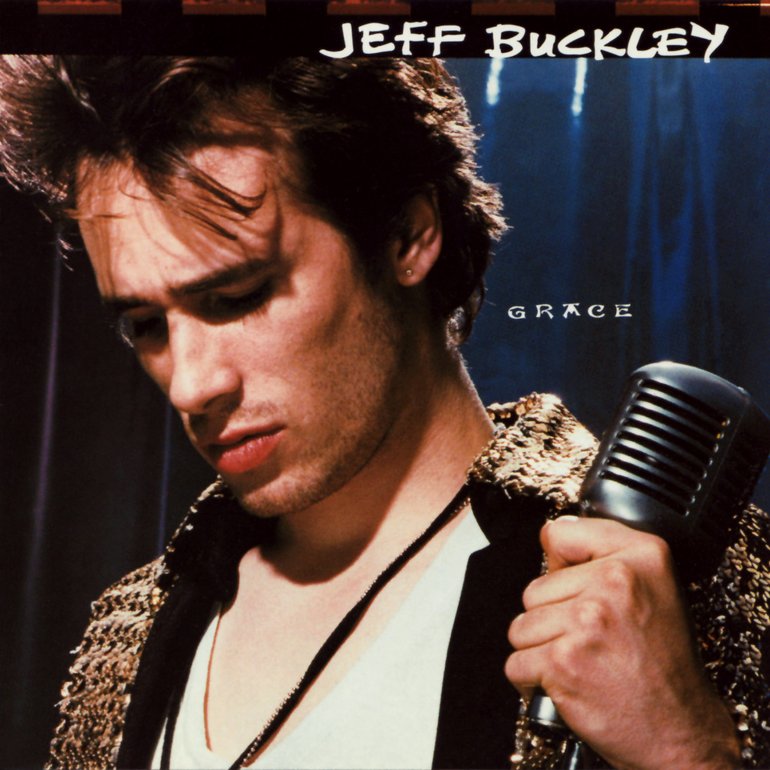 Who could’ve thought that an album that peaked well outside the Top 100 in the charts upon its release, regardless of the ‘underground’ following its auteur Jeff Buckley had from playing cafés like the Sin-é, or his genealogy, would become something so monumental that Robert Plant himself cites it as one of his favourite albums of all time? Grace, the genre-bending debut of California-born but New York-raised Buckley housed 10 tracks – three covers and seven originals – and 25 years later stands strongly as one of the most touching, subtle and influential records of all time. Sensuous, dripping with desire and wrapping each listener in its air of sacredness towards the everyday, Grace is a tragically beautiful, dynamically varied album that is hard to be apprehensive about.

Raised by Mary Guibert, a classically trained pianist and single mum, Jeff Buckley lived on the west coast in California during the formative years of his life. Picking up guitar at the age of five, his mother and later his step-father were the people who introduced musicianship into Jeff’s life, unlike many who assume that is was his emotionally deadbeat dad, folk legend Tim Buckley, who was behind his pursuit of the arts. Whilst playing in a myriad of cover bands, from reggae to metal and folk, initially Buckley wanted to pursue acting, yet dropped it and moved to New York, later commenting that the overall L.A. atmosphere seemed too fake-cheery, lacking in honesty and rawness that he found on the east coast, as well as its opportunities for musicians.

There, he played coffee shops, gaining a residency at the legendary yet now-extinct Irish café Sin-é, busting out the unlikeliest of covers, from jazz to classical, demonstrating an undeniable talent. A sense of feverish truth followed every performance, and it wasn’t long until the bidding wars for signing Buckley followed, with Columbia Records winning his signature. Signed as a legacy artist, Buckley got all the playground space in the recording studio for his debut, and released Grace in 1994, at a time when Britpop and the grunge-inspired alternative rock scenes were dominating on either side of the Atlantic.

As discussed on the Opus, the COS podcast on legendary albums, Grace is a truly peculiar one in the context of the music industry in which it was released. The dynamics, the melting of genres together, the heavy strokes of vulnerability and impressionism of the lyrics all amplified with that heaven-and-earth-stirring voice of his, Grace was an album undeniably unique and personal to Jeff Buckley himself, unusual in the time of Britpop and grunge, nu-metal not yet poking its head out. No puffed chest, no macho, no lad-ism. Even years later, Grace sounds as if it was painstakingly chipped away bit by bit from a colossus of an emotional storm of ideas and matured musicianship, resulting in an album touching and relevant to all, whilst remaining intrinsically personal to Jeff Buckley.

Each track, original or cover, possesses impressive compositional swell and breadth, from the shy start of ‘Mojo Pin’ followed by the crashes and lashes of its final moments, to the Zeppelin-inspired rock riffing of ‘Eternal Life’ striking as surprising in the record’s context. The covers – his definitive version of Leonard Cohen original ‘Hallelujah’, a take on Nina Simone’s interpretation of ‘30s Broadway track ‘Lilac Wine’ and Benjamin Britten’s sepulchral ‘Corpus Christi Carol’ – though peculiar in choice, prove Buckley’s artistic ability to re-invent something well known and give it his own musical essence and meaning, whatever the genre or general source, a talent he exhibited right off the bat playing those coffee shop gigs, where it was just him and a borrowed Telecaster and amp.

‘Hallelujah’, said by Buckley himself to be about the sacredness of an orgasm, starts off almost menacing, a flavour added in this version, possibly to make the original chord progression even sweeter. Despite the massive overexposure it’s gotten in the media over the last decade and a half, Buckley’s version still retains its mysterious power when heard in the context of Grace itself. ‘Lilac Wine’ is minimal in instrumentation, words and vocalisation at the front at first, growing and swelling bigger and bigger with each pluck of string, whilst ‘Corpus Christi Carol’ sound as sacred and regal as expected, Jeff’s voice showcasing its high register without the usual dynamic up and down. The latter cover is a good illustration of not one but many a times where Buckley’s choice of cover material was as surprising as impressive, pursuing vocal styles he neither trained nor practiced for, seen at those Sin-é gigs.

Throughout the original compositions of Grace, the power of Buckley’s voice as a unique, individual instrument shines strong here, there, and everywhere (forgive the Beatles reference), leading that signature Jeff Buckley sound in accordance with his exquisite compositional skills. ‘Mojo Pin’ is a beast of a track, singing of a Black Beauty, likening attraction to addiction, an unhealthy pull, theatrical and second to none, painting scenes of intimacy with lines like “I’m lying in my bed / The blanket is warm / This body will never be / Safe from harm / Still feel your hair / Black ribbons of coal / Touch my skin / To keep me whole….”. The title track, ‘Grace’, in the words of Jeff Buckley himself is about “not feeling so bad about your own mortality when you have true love”, andwith the artful crash of cymbals and guitar lines puncturing the verses as Buckley employs his lower register, that seems painfully easy to understand.

‘Last Goodbye’ might appear like a more traditional ‘goodbye to our love’ song, but the hook of “Kiss me, please kiss me / But kiss me out of desire, babe, not consolation” strikes as an unexpected addition, enriching something that’s already so well-composed with that particular Buckley-esque poeticism, as well as acknowledging the sentiment that ‘good love must die to remain good’. ‘Lover, You Should’ve Come Over’ continues that sentiment a bit later in the record, with visuals of funerals and inner dialogues about the nature of men who get ‘carried away’ and ruin the good things in their lives by having their fun:

That verse tugs at your heartstrings in that special way with its monstrous yearning, as the instrumental builds and builds, becoming arguably one of the most beautiful love song moments of the Nineties.

As beautiful as they are, the intended tender moments of Buckley’s songs can be funny as well. The dramatic “I love you, but I’m afraid to love you” on ‘So Real’ can fall quite flat and simplistic when one compares Buckley’s previous lyricisms that drip with more or less honest sensuality, as honest as romantic lyricism intended for an audience can be. ‘Eternal Life’, on the other hand, packs a similar punch like ‘So Real’ does, quick to be catchy and memorable, probably fitting in the most with the popular genres of the time with its distorted guitars and Buckley’s rock yowls, as well as expressing anger over ‘the man’ and the fragility of life in a poetic way.

The official closer, ‘Dream Brother’, appears to be the most biographical of songs if viewed through the lens of fans who do not tire of compare Jeff with his late father Tim Buckley. A cautionary song for Buckley’s friend, guessed to be Chris Dowd of Fishbone and The Seedy Arkhestra, it warns against walking out on a pregnant girlfriend and argues to face the consequence of one’s mistakes, adding emotional heft with Buckley’s personal experience of his father not participating in his life, having met him only once before he died of a heroin overdose in 1975.

There’s not much to say about the visuals of Grace rather than that the live performances of the album are all the visuals one needs to deepen their understanding of this record. Like Live in Chicago, the complete immersion and loss of self are so apparent in Buckley’s performance, that it seems almost impossible that Buckley held anything back in the process of creation of Grace. Songs strung together on the spot with interludes amid soundscapes and Buckley’s vocalisations, one can only dream to see Buckley play live to experience such a strong emotional performance, all made to look effortless by the excellent musicianship of him and his band.

Forgive me if this is musical sacrilege, but in a weird, contorted way, Jeff Buckley is a bit like Regina George from teen superflick Mean Girls. Hold your horses before you stone me for tainting his memory – that’s the sort of behaviour I’m talking about. If you’ve seen Mean Girls, there’s that bit in Regina’s introduction where all the high school girls share the rumours about Regina, with a thick layer of glorification and fear – this is the queen of this school, she can do no wrong, we all secretly kind of hate her, but we’d follow her every word. Am I saying Buckley is an over-glorified musician we all secretly hate? No, but the way his memory is sanctified in a sort of untouchable, ‘genius died too soon’ aura doesn’t lend much space for modern reinterpretation and critiquing of his work. It also has given us two subsequent decades of constant reveals of his unreleased work, with an almost macabre thirst to see what the young musician was working on post Grace, which something tells me wouldn’t be what Buckley himself would have agreed to do – unfinished work is private work, especially for someone who valued artistry so highly.

And yet, we have releases of the unfinished sessions from Buckley’s second album Sketches For My Sweetheart The Drunk and more outtakes in the form of 2016’s barrel-scraping exercise You And I. Understandably, having passed away at the young age of 30, second album still in progress, Buckley’s possibly even more impressive artistic prowess remains a mystery, fuelling that thirst for more material, to at least guess which way was he planning to go with his artistic growth. But it also precludes a more analytical judgement of Grace as the years pass, the only material to compare it to being unfinished studio work.

25 years having passed, we can only acknowledge that Grace is truly something special, said to reveal new unnoticed details and moments of brilliance upon each new listen. Grace simply proves it’s a classic by how strongly and passionately auteurs like Robert Plant and Thom Yorke talk and reference it, be it praising it for its beauty, or performing in a Buckley-inspired manner. With new releases of live Buckley performances, never before heard, to be dropped soon, we can only hope Buckley ‘live’ lives up to the hype. The artist himself is of course sadly no longer with us to participate in this conversation, agreeing or denying in that great Buckley manner that Grace is his apex, just like in this interview with Rockrush on the eve of its release, saying that he can “make a better record that Grace”.

Listen to Grace by Jeff Buckley here via Spotify, and tell us what you think below!