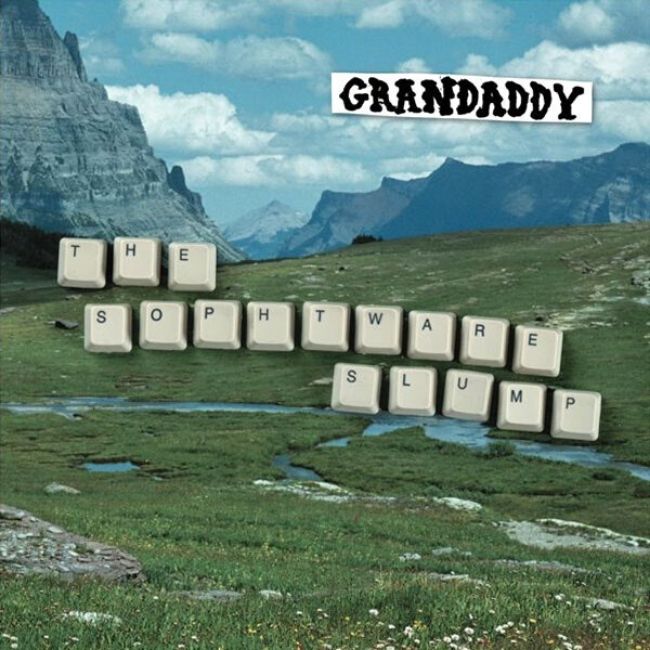 During the Nineties, a significant trend in popular culture fixated on the upcoming turn of the millennium, an anxious and often paranoid impulse that produced a rich seam mined by many artists to generate a raft of compelling works both political and personal. What was given less media exposure by the music press, however, was a post-millennial feeling in the years after 1999 – when Y2K and all those frightening news reports about the millennium bug never materialised and that, far from the great leaps forward in technology, society and leisure that all those predictions of what the future might be like, nothing had changed.

One of those that did address that feeling of cultural anti-climax was The Sophtware Slump, the second studio album from Californian slacker rock outfit Grandaddy. Its title owing to a pun on ‘sophomore slump’, a term used to describe a band’s ‘difficult second album’ syndrome, it was a jaded and sometimes cynical analysis at the state of Western civilization, concerned with junk, pollution and human atomisation at the dawn of the 21st century.

Most of the immediate comparisons were with Radiohead’s masterpiece of pre-millennial tension that was OK Computer, but the key influences on The Sophtware Slump, at least sonically, were much closer to home. The affected nonchalance of Pavement, the switched-on awareness of early R.E.M. and the quieter, more countrified end of Neil Young’s catalogue were the main reference points. The wry, country-tinged slacker rock of their low-key 1997 debut album Under The Western Freeway was this time infused with flourishes of electronica, fizzing keyboards and general touches of technology that made The Sophtware Slump feel like an upgrade, rather than a whole new direction. Surprising, then, to learn that Grandaddy’s lead singer Jason Lytle recorded virtually the entire thing by himself, in a remote, scorching hot farmhouse outside Modesto, California – in his words, “in my boxer shorts, bent over keyboards with sweat dripping off my forehead, frustrated, hungover and trying to call my coke dealer.”

The result is an unmistakably very downcast and sad album, but one which contains none of the histrionics of angst and despair that usually accompany sadness in the rock idiom, and is all the better for it. Throughout, Lytle’s disposition and general bearing are of someone carrying a weight on their shoulders, but whose clear-eyed commitment to narrative storytelling makes light of that burden and sense of resignation. His fragile vocals provide a very human and necessary counterpoint to the twinkling electronics and precise guitar-playing that envelop him.

That mood is established right from the nine-minute opener ‘He’s Simple, He’s Dumb, He’s The Pilot’, an intricate and cryptic piece stitched together from three different song ideas that comes to life like some haunted music box, passing through serene electronica-influenced rock before ending in ambient, progressive-rock territory. Crediting the listener with the intelligence to follow it as it meanders beautifully along without really explaining itself, it encapsulates all the melancholy and low-key aspects of the album in one place, addressing existential crisis and purposelessness in modern life with the repeated lyrical motif “adrift again, 2000 man”.

The themes of alienation, dislocation and general existential crisis are a common thread throughout Lytle’s touching stories of lost pilots, robots, off-world miners, and programmers. It feels like a very personal album, even though almost all of it is told via characters, or at least narratives that aren’t from a first-person perspective. It’s an album of personal wishes coming up against concrete realities – the protagonist of ‘Miner At The Dial-A-View’ looks back at his home back on Earth via some fictional telescopic technology but doesn’t know where his girlfriend is, and is powerless to know anything more, resigned instead to dreaming of “going home someday”.

Even at The Sophtware Slump’s exquisite conclusion ‘So You’ll Aim Towards The Sky’, one of the most accurate musical expressions of a sigh you’ll ever find in pop music, he sings in the second person. Lytle looks upwards at the sky and yearns to escape but knows he cannot. The exquisitely forlorn electronica of ‘Hewlett’s Daughter’, a pang of regret set to music, seems to be sung from an invented person’s point of view. It’s only really on ‘Underneath The Weeping Willow’ that his guard drops and he sings in the first person properly, dreaming of falling asleep in the shade of a tree.

These elements also find expression in a strong ecological theme that runs throughout The Sophtware Slump, one that recognises the environmental impact that globalisation, consumerism, growth and progress inherently makes. ‘Broken Household Appliance National Forest’ is the most explicit statement of this, visualising a future where obsolete white goods have despoiled natural beauty spots to the point that nature and animals have reclaimed them. ‘Jed The Humanoid’ is the very best of these – whoever knew a song about an alcoholic robot could be so devastatingly sad? A metaphor for how humans rapidly lose interest in their new toys, it works despite Lytle often struggling to fit the lyrics to rhythmical schema. ‘The Crystal Lake’, which pierced the lower regions of the UK Top 40 when re-released as a single many months after the album’s release, is a warning against the illusory and temporary benefits of rapid modernisation (“dogs are dead of broken hearts / collapsing by the coffee carts”) in the same vein as Talking Heads’ ‘(Nothing But) Flowers’.

Upon release, The Sophtware Slump received almost universal critical acclaim and raised Grandaddy’s profile significantly over the world, making many publications’ lists of the year and end-of-decade rundowns. Its follow-up, 2003’s Sumday, was much more of a full-band affair, indulging in wistful psychedelia and seeing Jason Lytle drop the character studies and sing almost entirely from a first-person point of view. While similarly successful in commercial terms, it didn’t quite ignite in the same way as its predecessor, however, and 2006’s heartbroken Just Like The Fambly Cat proved the be the final album in Grandaddy’s original iteration. Lytle reunited the group a couple of times in the early 2010s, before a solid comeback in the shape of 2017’s Last Place reminded everyone of what strange talents they were. Tragically, bass player Kevin Garcia died later that year following a stroke at the age of just 41, and Grandaddy has been on ice ever since.

The Sophtware Slump remains their most revered work, and will likely be their epitaph forever. Executed with Lytle’s idiosyncratic and abstract style, it essayed the feeling of cultural anti-climax, that technology only brings changes for the worse, if at all. It had particular resonance because of the context of its release just a few months into a new millennium. The future, which we had all been promised would be better, had finally arrived, and it was as disappointingly the same as it was before. Not only that, Western humanity was even more alienated, disposable and precarious than ever. Jason Lytle, alone and hunched over his banks of keyboards and instruments in a dusty Californian cabin, captured that truth more accurately than many before or since.

Listen to The Sophtware Slump by Grandaddy here via Spotify, and tell us what you think below!