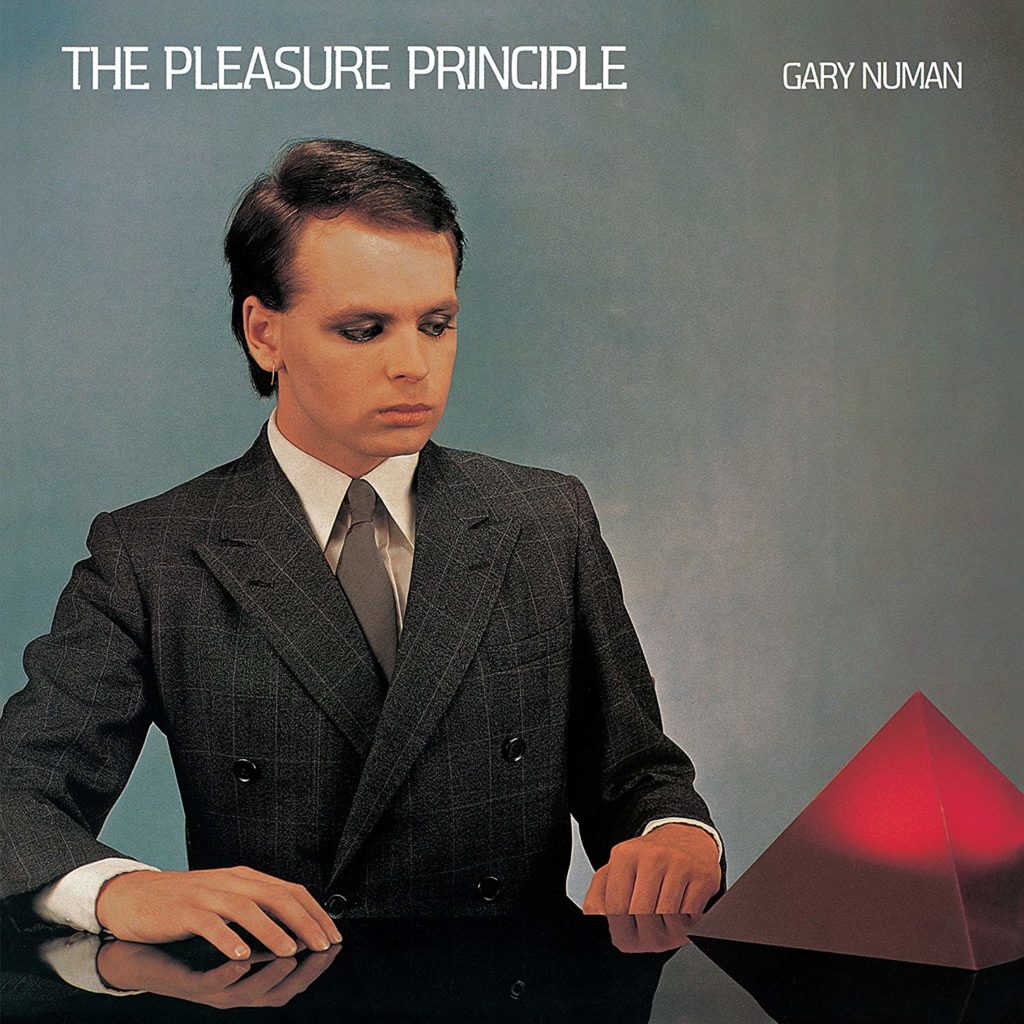 Synthesisers had been in use in popular music long before our collective consciousness normally recognises them as having appeared in the charts. Edgar Froese had used them in his Tangerine Dream recordings as far back as the late Sixties, and several progressive rock acts had implemented them into their ambitious compositions (although you needed a doctorate to operate them). However, they had very rarely been put front-and-centre of the music until the late Seventies, when Kraftwerk and various new-wave acts made them critically respected. What is for sure is that the Year Zero for commercially viable, big-selling synth-pop was the release of The Pleasure Principle, the first solo record from Gary Numan.

Numan has always occupied a slightly odd position in the pantheon of music, insofar that he’s pretty much universally known, yet has never received the kind of respect as he ought to have done. To anyone looking at his live performances now without the sound on, they’d know exactly what the music would sound like. Yet when he broke through to the mainstream in 1979, it must have been difficult to understand exactly what he represented. Sitting there in a suit and stern side-parting, looking apprehensively at some strange machine on a desk, he looks part androgynous Bowie-esque extraterrestrial, part Kraftwerk-style robot à la The Man Machine and part man-about-town Bohemian. He fits in to an established narrative of sophisticated art-pop, yet the music he had hitherto made with Tubeway Army sounded like almost nothing else around, despite hinting at all of those influences.

Four decades on, the ten songs that constitute The Pleasure Principle seem like blueprints for the future of pop, experimental prototypes for today’s digitally-generated chart pop. The Moog drones of bass, the steely, mechanical rhythms and Numan’s numbed, robotic and alienated vocals seem to pre-sage the Auto Tune-dominated decade of pop/R&B that continues today, while the swells and sweeps of electronic instruments that contrast against it have long since been co-opted in mainstream rock.

The simplicity of those melodic lines and musical figures – some of which crop up again and again, in similar if not identical form, throughout The Pleasure Principle like a suite of classical music – often serve to mask darker perspectives. These songs explore the nature of the relationship between human and machine, and the disconnection and loneliness that ensues at the cost of convenience and speed, a theme that has echoed in science fiction literature and film as well as forty subsequent years of pop music.

Right from the moment that the signature synth sound and machine-like rhythms strike up for the soaring instrumental opener ‘Airlane’, The Pleasure Principle is a ruthlessly singular experience. Synths alternately buzz in the low end of the mix, and glide smoothly at the top of it, with same basic melodic and rhythmical motifs appearing in the chugging, proto-hip-hop rhythms of ‘Films’, the clammy claustrophobia of ‘M.E.’ (sampled for Basement Jaxx’s ‘Where’s Your Head At?’) and the sparse ‘Observer’ which acts as an overture for ‘Cars’. In fact, other than the teutonic pulse that underpins the closing ‘Engineers’, the same template is ever-present throughout its ten tracks.

Numan’s distinctive vocals evoked disconnection and coldness, something compounded by his androgynous, heavily made-up appearance that made him look like the kind of half-human, half-machine replicant he was singing about. ‘M.E.’ was sung from the perspective of the last machine on Earth, and ‘Metal’ from the viewpoint of an android who longs to be human. The lyrics of the resplendent, robotic ‘Conversation’ tell of communication with computers (“you’re just a viewer / so cold and distant”).

Most famous of all, and arguably the thematic core of The Pleasure Principle, is the global hit single ‘Cars’. An icy, austere arrangement that mimicked the clean, disinfected hum of machinery, it was a commentary on social atomisation and the illusory benefits that technology brings. Numan was inspired to write it after noticing how differently people behave behind the wheel of a car, protected by half-a-ton of metal, than on the street – in 2019, the same dichotomy can be observed with how people interact with each other online, given the anonymity offered by social media. ‘Cars’ was a massive synth-pop crossover, hitting the top of the charts in the UK (making it Numan’s second no.1 single of 1979 after the Tubeway Army’s equally iconic ‘Are Friends Electric?’ hit the summit) despite its vocals finishing less than halfway through the track.

However, for all its bold use of technology, what often goes underappreciated about The Pleasure Principle is its human elements, particularly the contributions of Numan’s backing band, which make it more of an ensemble experience than one might imagine. Utilising a formation of keys, bass guitar, drums and viola – the latter particularly prominent on ‘Complex’, a UK no.6 hit that was one of the first-ever electronic ballads to make any kind of impression on the charts – they provide the otherwise synthetic album with an unmistakably organic heart. ‘Tracks’, in particular, is propelled along like a piece of prog-rock, and Paul Gardiner’s precise bass-playing on ‘Metal’ and Cedric Sharpley’s economical, well-placed drum fills on ‘Films’ also demonstrate this eye for detail.

Reaching the top of the charts in Britain and selling over 100,000 copies – on top of the massive international success of ‘Cars’ – The Pleasure Principle helped to bring forth a sophisticated new wave of synthetic rock music, from chart acts in the form of the New Romantics in the early-to-mid Eighties to American acts like Smashing Pumpkins and Nine Inch Nails the following decade. Numan’s music was also fleetingly fashionable again in the mid-Noughties at the height of the so-called ‘nu-rave’ phenomenon, even appearing in self-effacing ‘Mighty Boosh’ sketch, with various artists seeking to revive the kinds of vintage sounds that he had originally pioneered a quarter of a century before. Essentially, Gary Numan was the first artist to clearly demonstrate the commercial viability of synth-driven music, permanently altering how it was perceived by the public at large from one of novelty to credibility. The Pleasure Principle is still his most perfect expression of his aesthetic.

Listen to The Pleasure Principle by Gary Numan here via Spotify, and tell us what you think below!