FROM WORST TO BEST: Metallica 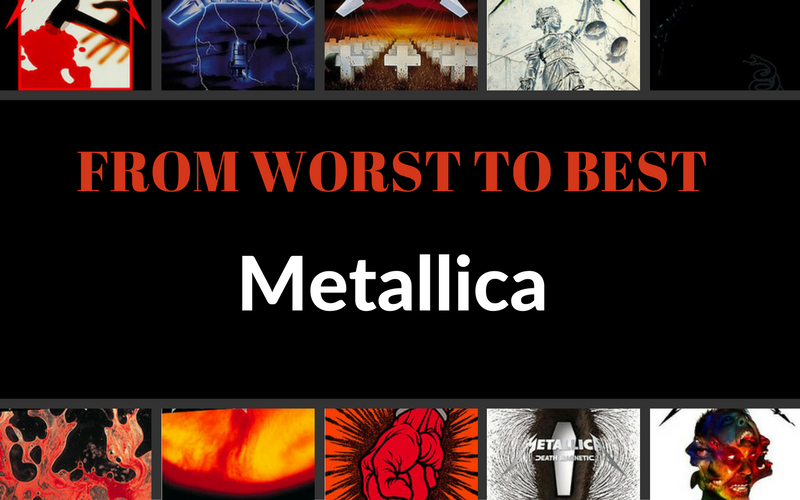 No other heavy metal band, since Black Sabbath starting the whole mighty genre (no, not Led Zeppelin or Deep Purple), has had an impact on heavy metal quite like Metallica. It all began when James Hetfield replied to Lars Ulrich’s L.A. Recycler newspaper ad. Ulrich and Hetfield instantly bonded because of influences like Diamond Head, Saxon, Motörhead, and Budgie. Soon Hetfield’s friend and roommate Ron McGovney joined as bassist and Dave Mustaine became lead guitarist. In 1982, they released their acclaimed tape recorded demo No Life ‘Til Leather which quickly made them popular on the Bay Area scene.

Due to friction between bandmates, McGovney left the band in late 1982 and was soon replaced by Cliff Burton. In April 1983, Mustaine was fired due to alcohol and drug abuse and Kirk Hammett stepped in. That same year Metallica’s debut album Kill ‘Em All was released, which propelled thrash metal onto the music scene with songs like ‘The Four Horsemen’ and ‘Seek & Destroy’. A year later Ride The Lightning was released followed by Master Of Puppets (1986) and …And Justice For All (1988); all must-listens for anyone new to Thrash Metal. Tragically in 1986, Cliff Burton died on tour in Sweden when Metallica’s tour bus crashed. Jason Newsted was his replacement for …And Justice For All.

It was after the release of their infamously controversial ‘The Black Album’ that Metallica’s career took a turn. They had achieved mainstream success due to their new musical approach that was dissimilar to previous material. The single ‘Enter Sandman’ has gained unlimited worldwide praise. Then Metallica released Load (1996), followed by Reload (1997), that explored principles of hard rock rather than pedal-to-the-metal thrash. Both albums have hit the No.1 spot on multiple European album charts as well as the US Billboard. It was after this that Jason Newsted’s place in the band was in jeopardy. After arguments with James Hetfield about his side project Echobrain, Hetfield questioned his commitment to Metallica and so Newsted left the band in early 2001. Following this, Hetfield went into rehab the same year; the band’s future at this point was deeply uncertain.

Thankfully, Metallica were not ready to admit defeat at what was their straining point in their career. St. Anger (2003) was a very unusual Metallica album due to the exclusion of guitar solos and its angry and rage-filled nature. However, it reached No.1 spots on numerous album charts worldwide. This was the first Metallica album to feature ex-Ozzy Osbourne bass player Robert Trujillo. Death Magnetic (2008) saw Metallica delving back into the pits of thrash but putting a modern twist on things. The same can be said for their latest release Hardwired…To Self-Destruct (2016) with songs like ‘Spit Out The Bone’ reminding us what Metallica are capable of at fast tempos.

For this list, the entries consist of Metallica-original studio albums only. This means the superb covers album Garage Inc. (1998), the outstanding live album S&M (1999), and the extremely divisive Lulu (2011), the collaboration album with Lou Reed, are not included in this list. For the record, this list is based on what I think as a Metallica fan. Therefore, any thoughts or comments will be much appreciated.