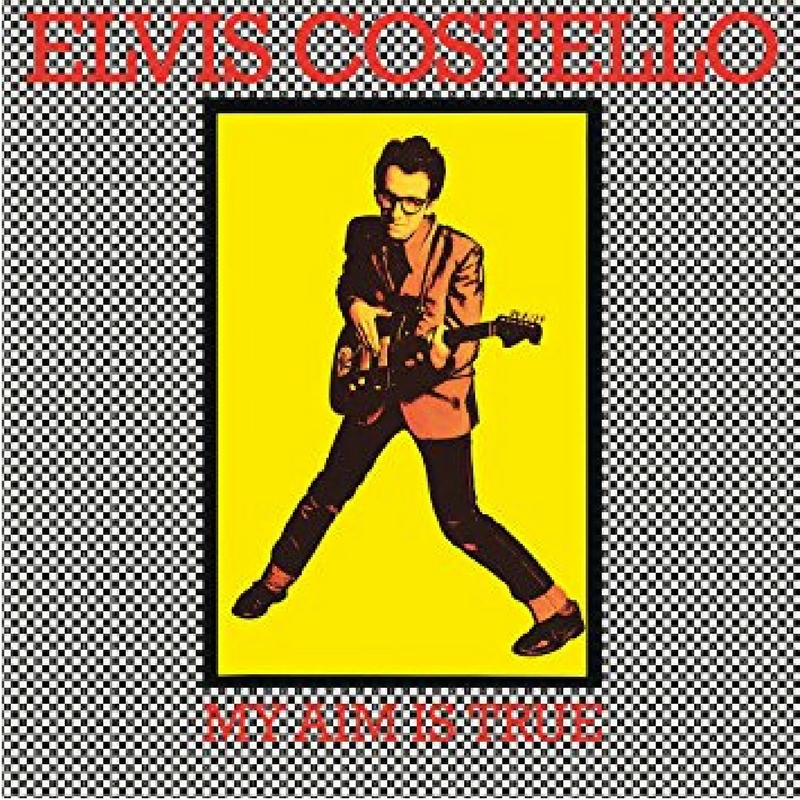 Crashing onto the British music scene in late 1977, Elvis Costello is one of the most gifted and consistent pop songwriters these isles have ever produced. Over four decades, 30 studio albums and dozens of hit singles, he has mastered new-wave, rock’n’roll, protest music and pure songcraft to keep reinventing his sound and maintain his relevance despite countless shifts in fashion, and his influence on singer-songwriters and rock frontmen on both sides of the Atlantic has been understated but incalculable.

On his debut album My Aim Is True, Elvis Costello is the personification of the bitter, disaffected male musician, the archetype of which has been a wellspring of inspiration for dozens of male artists since – nerdy guys, possibly unable to get laid and definitely feeling out of place in society, channelling those frustrations to the brain rather than the penis and lashing out at the world via music, the pen being mightier than the sword. Everyone from Ian Dury and Morrissey to Rivers Cuomo and Daniel Johnston owes a debt to him.

However, where subsequent artists have taken that in a rather clumsy direction (most nu-metal artists tangentially fall into this category), Costello remains intelligent and self-deprecating enough to turn some of that fire at himself. While he is often associated with punk and the concurrent London pub-rock scene – stylistically different movements but sharing a distaste for the bloated state of mainstream rock in the mid-‘70s – Costello transparently has a much more melodic ear and sensitivity that many of his contemporaries, rejecting punk’s year-zero nihilism. Therefore, while punk was raging in the summer of 1977, Costello’s debut album, released that July, was already ahead of the curve, anticipating post-punk and new-wave while most of his rivals were sticking to a three-chord formula.

Recorded in just six sessions of four hours each, for a total of £1,000 and under the production guidance of fellow pub-rock/new-wave luminary Nick Lowe, My Aim Is True was written late at night at Costello’s home so that he wouldn’t disturb his wife and child, and on the London Underground commuting to his job as a data entry clerk. It says a great deal to the quality of his writing that, despite it being recorded in an eight-track demo studio in North London that he later described as a telephone booth, the album is now considered a classic.

His meeting with The Attractions, the first of his two classic backing bands throughout his career, was still a little way off yet, meaning that My Aim Is True is credited as a solo effort. However, it sees him playing with an uncredited band called Clover, members of whom were later to become The News when they were led by Huey Lewis. Throughout the record, they a versatile and highly disciplined unit, with guitarist John McFee (later of the Doobie Brothers) laying down licks and minimalist riffs as sharp as Costello’s cutting lyrics.

Ruthlessly pared-down but with just enough studio magic to make it a proper studio album rather than a collection of demo recordings, the overarching theme on My Aim Is True is satisfaction, or, more accurately, a lack of it. Right from the taut new-wave of ‘Welcome To The Working Week’, a sub-two-minute flamethrower targeting wage-slavery and the lack of opportunities available to young people in the late ‘70s (“I know it don’t thrill you / I hope it don’t kill you”) Costello focusses the same frustrations as his punk contemporaries into nervy performances of cynicism and dark humour, but constructive and forward-thinking rather than destructive.

Several of the tracks seem very familiar to a listener 40 years on, but that’s simply because they established the archetypes that subsequent generations have utilised. ‘Miracle Man’ is a treatise on male inadequacy and romantic rejection; ‘No Dancing’ and ‘Mystery Dance’ are a brace of tracks to equate dancing with sex; the sleazy bar-room rock of ‘Blame It On Cain’ is a disgruntled grumble about taxes that refers to “government burglars”; the loose boogie of ‘Sneaky Feelings’ refers to “everybody’s breaking up someone else’s home”, hinting at a dark side to the sexual revolution of the previous decade.

The stiff, rich bass of ‘(The Angels Wanna Wear My) Red Shoes’ was an obvious choice for a single, though it didn’t catch fire, with its classic Byrds-esque guitar riff shackled to a jittery rhythm. The same went for ‘Less Than Zero’, Costello’s first ever single, inspired by his distaste for British fascist leader Oswald Mosley, intriguingly has a reggae feel to its guitar pattern but features none of that genre’s syncopation.

‘Alison’, Costello’s first truly classic single, is an aching romantic ballad with a deliciously unnerving double entendre at its heart – is his protagonist looking to win back an old flame, as a superior man rescuing her from a boring married lifestyle, or is he looking to kill her, putting her out of her misery or even punishing her? “Sometimes I wish that I could stop you from talking / When I hear the silly things that you say” and the chorus line “my aim is true” can be interpreted either way.

It is performances like this that are a perfect illustration of Costello’s lyrical dexterity and strange sensitivity, as well as his intelligence and perceptiveness as a musician. All the way through, he strenuously avoids cliché to go for something more cerebral and yet has the skill and natural tunefulness to keep everything accessible.

Three weeks after its release, Costello got himself his first music magazine cover, a situation he described as being “an overnight success after seven years”. While three singles were released from the album, all of them minor chart hits, it would be the fourth track, the music-noir of ‘Watching The Detectives’, that would provide the step into the mainstream he craved. Recorded with members of The Rumour in a separate session and only included on My Aim Is True on subsequent reissues, it’s a skeletal and bitter piece of reggae played in a minor key telling the psychodramatic story of a disintegrating relationship.

As alluded to before, Costello was far from being a punk, but that tangible feeling on My Aim Is True of everything about his music being directed against the flabbiness of contemporary AOR is also encapsulated perfectly in its artwork. With his nerdy Buddy Holly glasses, his inwardly splayed knees and his steely, side-eyed stare down the lens while toting his guitar more like a machine-gun than an instrument, Costello looks like a man on an ideological mission to rescue guitar music.

Costello’s finest achievement as a songwriter, apart from his hit singles and obvious influence, is arguably one of tone. While his early work is often bitter, his songs are never hateful or outright aggressive. Rather, he tends to savour his own rage, using his vocabulary and wit to infuse it with self-doubt, anger and pity to make a much more complex bouquet. Yes, his songs are often explicitly about individual women, but it is not pointless ‘woe-is-me’ emoting and the tracks are not misogynistic lash-outs at the totality of womankind, and much of his frustration ultimately lands at his own doorstep as he analyses his own personal failings.

Only eight months later, Costello had hooked up with The Attractions, who would be his long-term backing band on/off until 1996’s All This Useless Beauty, and recorded arguably the greatest record in his entire discography, 1978’s This Year’s Model. This arrangement heralded a golden age of classic singles and a string of albums ranging from solid to great, the highlights of which can be accessed on any of Costello’s many greatest hits compilations.

While 1977 may be remembered as the year of punk, it’s very easy to forget that it also yielded a number of other classic albums from very different genres. While Elvis Costello is linked by association with punk, My Aim Is True was ahead of virtually all of the pack at the time, its author intelligent enough to foresee punk’s inbuilt obsolescence and with enough talent to push things forwards. It remains one of the best debuts of any era.

Listen to My Aim Is True here via Spotify, and tell us what you think below!

Grandiose yet heartfelt and nuanced, Arcade Fire's 2010 album 'The…

The magnificent epitaph for Ian Curtis and Joy Division, 'Closer'…

A symbol of youthful spirit at the dawn of Thatcherism,…