“Day Destroys The Night, Night Divides The Day”: An Introduction to The Doors 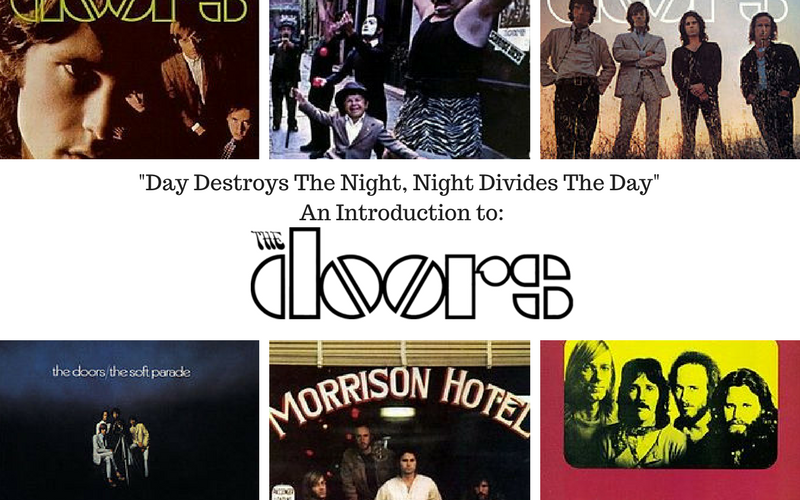 When one thinks about the idea of the ‘rock frontman’ as it has evolved over nearly six decades of popular music, it is certain that many of its component aspects – stage presence, musical or sexual charisma, performance art, theatrics, that undefinable ‘mojo’ that’s long since passed into self-parody – were established or influenced by The Doors’ lead singer Jim Morrison.

The self-appointed ‘Lizard King’; the acid-drenched shaman-poet; the lascivious lounge reptile… Morrison truly threw himself into his artistry, to the extent that it consumed his entire life and, arguably, cost him it too. From the desert-bound, peyote-driven trips of the likes of ‘Riders On The Storm’, ‘The End’ or ‘Break On Through (To The Other Side)’ that so perfectly encapsulate The Doors’ ethos, to the distinctive, skilled rhythm’n’blues workouts of ‘Roadhouse Blues’ and smouldering love songs like ‘Light My Fire’ or ‘Love Her Madly’, The Doors’ repertoire was vast and accomplished.

At the centre of it all was Morrison, a magnetic whirlwind of mystical charisma and sex appeal at the start of The Doors’ career. Possessing a voice capable of sweet seduction and roaring power at the same time, he was able lead his band to magnificent heights – check the spectacular climaxes of ‘The End’ or the “mojo rising” segment in ‘L.A. Woman’. Any subsequent rock frontperson who has sought to use performance artistry and theatrics in their delivery both on stage and on record, from David Bowie to Karen O, has channelled his spirit.

To date, The Doors have sold in excess of 33 million albums in the United States, and millions more worldwide. Morrison’s legacy continues to resonate as powerfully 50 years later as it ever has, with The Doors’ music continuing to be accessed by new generations of fans exploring rock history.

A chance meeting on L.A.’s Venice Beach in July 1965 between Morrison and future keyboardist Ray Manzarek led to the group’s formation, with guitarist Robby Krieger and drummer John Densmore coming aboard soon afterwards. Taking their name from Aldous Huxley’s novel ‘The Doors of Perception’ (itself referencing William Blake’s quotation, “If the doors of perception were cleansed, everything would appear to man as it is, infinite.”), the band quickly made its way up the ladder of L.A.’s local scene, landing controversial residencies at venues The London Fog and The Whisky A Go Go, before being signed by Elektra in August 1966.

Their quickly recorded self-titled debut quickly became a seminal album of the Summer of Love, and TV appearances on the likes of the Ed Sullivan Show made them notorious. Second single ‘Light My Fire’ shot to the top of the Billboard charts and became a million-seller in May 1967, and the band’s rapid ascent to fame was sealed. Scoring another chart-topper the following year in ‘Hello I Love You’, The Doors’ solidified their fame with another two albums, Strange Days and Waiting For The Sun, in less than two years, touring more or less constantly.

Evolving through a questionable experiment with The Soft Parade before righting themselves with the more mature blues of their final two records, the band’s popularity and notoriety continued despite them being blacklisted from the majority of venues and radio stations in America, which was the result of a number of riotous on-stage incidents, not least the one at Miami’s Dinner Key Auditorium in March 1969 during which Morrison was alleged to have exposed himself to the crowd. He was found guilty of public indecency and sentenced to six months’ imprisonment but freed pending an appeal. He died before the case was resolved.

Morrison was discovered dead in his apartment in Paris on July 3rd, 1971 in an incident that was quickly put down to heart failure and never investigated further. Paris coroners didn’t suspect foul play at the time, so no further investigation was undertaken, meaning that the various fan conspiracies offering alternative explanations for Morrison’s death can never be explored.

In the wake of his demise, the remaining Doors members decided to carry on as a three-piece, with Manzarek and Krieger sharing lead vocals. Two more formal Doors albums were released, 1971’s Other Voices and 1972’s Full Circle, plus a 1978 album of Morrison’s poetry set to music called An American Prayer, but they represented a pale shadow of the group’s former glory. Despite their indisputable and remarkable skill as individual musicians, there can be few other examples of rock groups so dependent on one personality other than The Doors.

Consequently, our whistle-stop guide to their discography on the next page covers just the six studio albums recorded during Morrison’s lifetime. Several greatest hits packages exist, the most essential of which is 2000’s The Best Of…, but we have compiled our own take on The Doors’ discography highlights in a Spotify playlist below.