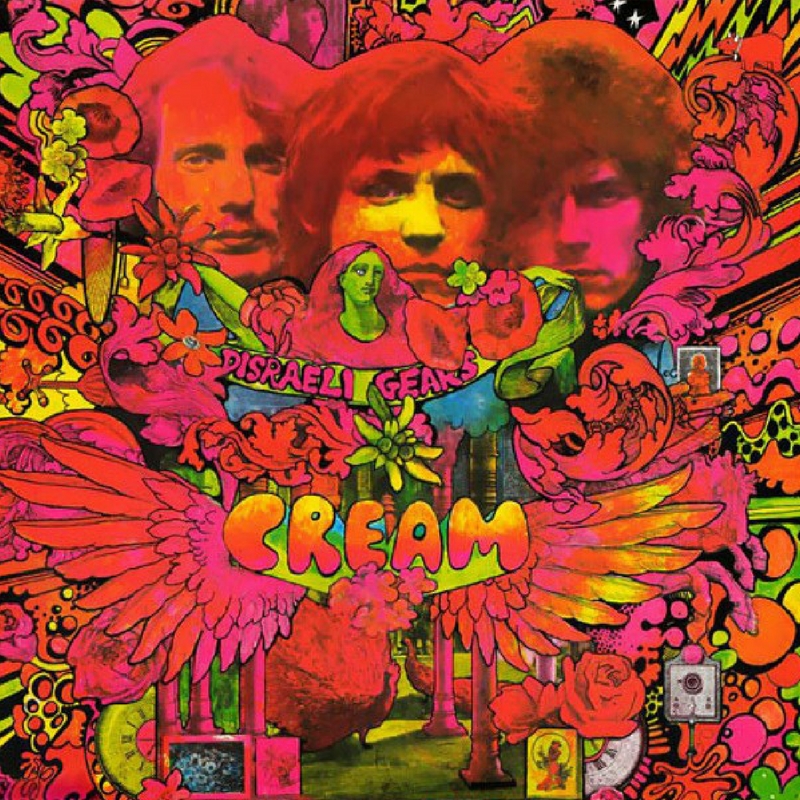 Influenced by: Willie Dixon, The Beatles, The Rolling Stones, The Yardbirds, John Mayall

Cream were one of the first examples of the ‘supergroup’, i.e. a group made up of prominent members of other bands. Comprised of bassist/vocalist Jack Bruce, drummer Ginger Baker and the legendary guitarist Eric Clapton, they played a hybrid of blues, psychedelia and hard rock. Disraeli Gears was their second album and often cited as their defining statement, seeing them build upon the straightforward blues of their debut (1966’s Fresh Cream) and into psychedelic territory, a totally natural evolution that would provide inspiration for many future guitar acts.

The word ‘psychedelic’ tends to conjure images of endless guitar solos and loose, abstract themes, but Disraeli Gears rubbishes these preconceptions. With eleven tracks clocking in at just over 33 economical minutes, it is a disciplined and utterly mesmerising package. Clapton and Baker improvise skilfully with their parts but never stray very far from the basic blues structures of the tracks, while the classically trained Jack Bruce found his contributions often served as the chassis of Cream’s songs.

Teaming up with Felix Pappalardi on production seemed to spur Cream into making the most immediately accessible music of their career, and arguably their most consistently brilliant album, with a thematic coherence that was missing from Fresh Cream, an album that often seemed like a creative brain-dump. While its psychedelic leanings firmly anchor it in 1967 as a sonic timepiece, Clapton’s ferocious riffage and the group’s collective knack for distilled pop skill have made it an enduring popular album for subsequent generations. It is rooted in the improvisatory blues paradigm of their original creation, but also displays Cream as a massive power trio.

Disraeli Gears’ curious title comes from a malapropism. Clapton had been thinking of buying a racing bicycle and was discussing it with Baker, when a roadie named Mick Turner commented “it’s got them Disraeli gears”. He had meant to say ‘derailleur gears’ but instead alluded to Benjamin Disraeli, a 19th-century British Prime Minister. The band thought it was hilarious and adopted it as their new album’s title.

Opener ‘Strange Brew’ is a intoxicating, kaleidoscopic piece built around a very basic blues rhythm, a microcosm of the album itself, a shorthand for the lysergically-enhanced blues-rock Cream were dealing in. Trailing the release of Disraeli Gears earlier in the summer of 1967, it’s one of the best examples of the era’s psychedelic explorations.

Following it out of the traps is ‘Sunshine Of Your Love’, which stills stands as one of Clapton’s most memorable riffs and solos and features a tightly-knit rhythm, a perfect meld of psychedelia and hard rock. Any teenager who has ever learned how to play electric guitar will remember being taught its signature riff early on. Despite being culturally distant from the Louisiana bayou and the voodoo-influenced blues he was invoking with his vocals, Jack Bruce’s performance is a treat.

A mixture of established music, a decades-old blues idiom combined with flourishes of jazz improvisation, and cutting-edge trends, namely Clapton’s psychedelic riff-storm, ‘Sunshine Of Your Love’ is the archetypal Cream song. Upon their disbandment in early 1969, Jimi Hendrix memorably quit playing ‘Hey Joe’ during a BBC broadcast and launched into a searing take on the track in tribute to Cream – a sign of the group’s titanic influence.

While Disraeli Gears leads with its two strongest tracks, the rest of the album has more than enough intrigue to capture the listener’s attention despite a couple of makeweight tracks that rely more on the blues. ‘World Of Pain’ and ‘Blue Condition’ are both soft and woozy, the latter seeing the Baker’s fondness for jazz creep in. ‘Outside Woman Blues’ is a brilliant, laser-precise Clapton arrangement of a traditional 1920s blues song.

‘SWLABR’, while probably the most dated track with its fuzzy freakout feel and Hendrix-ian licks, is a jittery, distinctive riff that demonstrates how tight Cream were as a unit. ‘Tales Of Brave Ulysses’ is another highlight, a bizarre adaptation of ‘Homer’s Odyssey’ filled with psychedelic imagery (“tiny purple fishes run laughing through her fingers”, for example), with Clapton’s fire-breathing soloing making it complete. The minimalism of ‘We’re Going Wrong’, the only track Jack Bruce wrote without co-writer Pete Brown, is an adept change of tone.

Added onto the end is a jaunty, jokey adaptation of the traditional ‘Mother’s Lament’, sticking out from the rest of the album like a sore thumb but weirdly reminding the listener that Disraeli Gears is meant to be a fundamentally English take on American-based music.

Disraeli Gears followed its predecessor as becoming a success in Britain, but it was in the United States that it had the biggest splash, breaking them as a commercial smash as their brand of psychedelia caught the imagination. ‘Sunshine Of Your Love’ became an enormous hit in the Billboard charts the following summer, with the album finishing up as the fourth biggest-seller in the States in 1968 and with well over a million copies sold.

Acts ranging from tripped-out desert rockers Queens Of The Stone Age to progressive guitar acts like Emerson Lake & Palmer and hard rock bands like AC/DC and Led Zeppelin have roots in the kind of music that Cream were making on Disraeli Gears.

Cream themselves split up little more than a year later after just two more albums (1968’s Wheels Of Fire and 1969’s Goodbye). Clapton, of course, went on to have a hugely successful career as a solo artist, after forming Blind Faith with Baker in the aftermath of the band’s demise. Bruce played in a variety of blues and jazz bands as well as crafting an acclaimed solo career, while Ginger Baker spent most of the ‘70s living and recording in Africa pursuing his interest in the continent’s musical history, playing alongside legends such as Fela Kuti.

Listen to Disraeli Gears by Cream here via Spotify, and tell us what you think below!