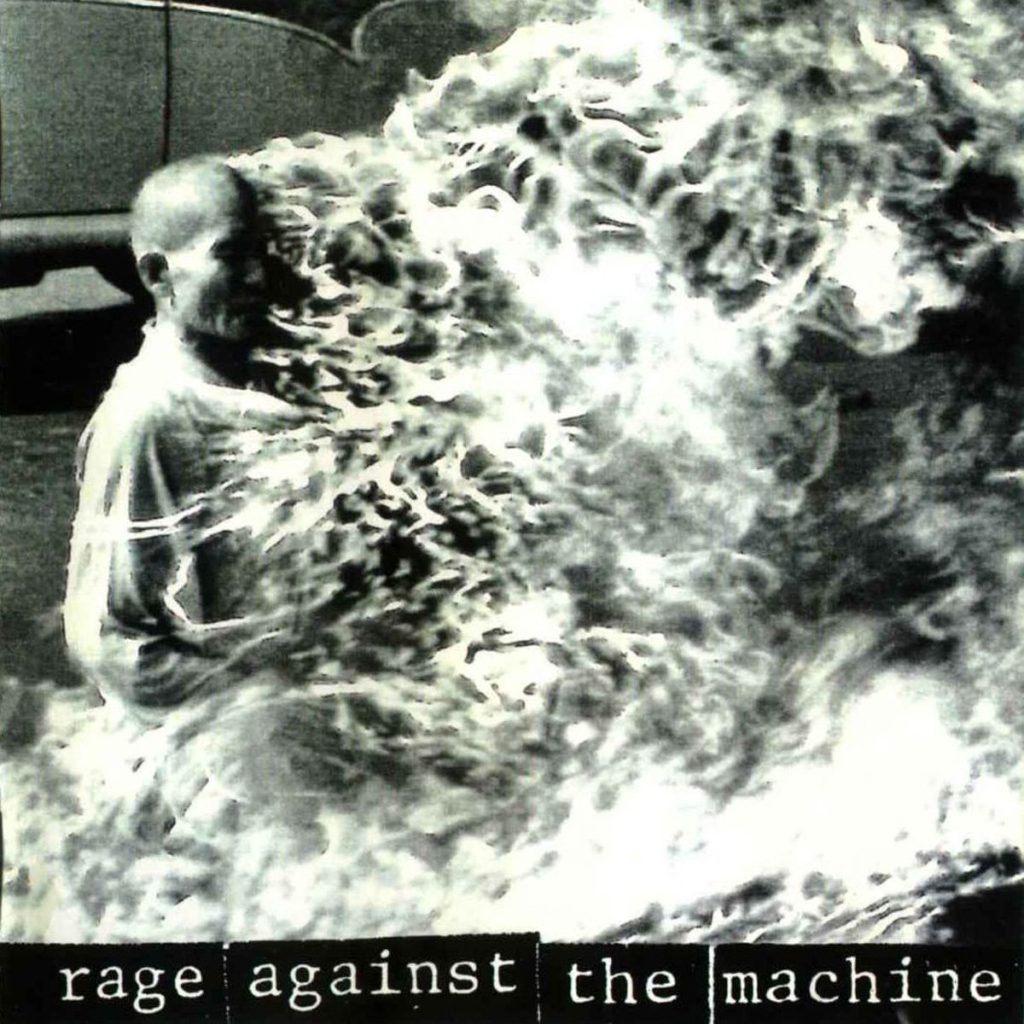 Rage Against The Machine’s unapologetically livid self-titled debut album was released a quarter of a century ago, yet its relevance in culture and politics has only ever gone up. The album’s leftist and anti-capitalist sloganeering adhere profoundly to a huge percentage of people across the globe, even more so in 2017 than it did in 1992.

It only takes a Google search to notice the upsurge and increasing influence that extreme politics is forging. Revolutionary anti-capitalist/communist groups like Antifa and By Any Means Necessary, that have risen in recent years, resonate with the heated topics surrounding Rage Against The Machine. Although Chuck D and B-Real evoke just as much passion within the Prophets Of Rage supergroup, Zack de la Rocha’s vocals and presence were undeniably the only real perfect match for the unparalleled blend of hip-hop, punk and rock music that Rage Against The Machine was famous for.

This rap-rock style did not necessarily begin with Rage Against The Machine, but they were certainly the ones who intensified it. Groups like Beastie Boys and Urban Dance Squad, two major influences of the band, in the ‘80s were executing similar beats with their music but the sheer heaviness, visceral bass and guitar tones and the haphazard mish-mash of different grooves that Rage’s debut encapsulated was something quite different. It’s not only true that Rage Against The Machine was astonishing in terms of instrumentation and lyricism, but also the in the context that notion that rock’s status was seen to be declining in the very late ‘80s.

Rock music in America, from the mid ‘80s onwards, was dominated by the ‘hair metal’ movement that became saturated far too quickly. As the ‘90s arrived, everyone became fed up with the same old pretty-boy imagery and cock-rock glam, and guitar music was begging for a recrudescence in originality at this point. The essentiality of Seattle’s grunge for mainstream rock music’s rehabilitation is indubitable, but what Rage Against The Machine concocted spearheaded not only rock music but also the divisive nu-metal sub-genre.

What really delineates Rage Against The Machine from hip-hop-infused rock albums of the ‘80s is not necessarily the social activism, or the ad-nauseum hatred for governments, but the way that these ideas were presented. De la Rocha’s off-beat rapping and compressed screams sparked a new kind of thrill and flamboyant panache that rock had never expected. Moreover, Morello’s guitar-playing sensationalism, Commerford’s slick, groovy basslines and Wilk’s powerfully energetic drumming provide the album’s polemic atmospherics.

The band waste no time in criticising the US government on the opener ‘Bombtrack’. Here, De la Rocha delivers a stunning introduction to the group’s political stance. The music video shows clips of violent protests and militancy in Peru – a country that had been in political turmoil for some time – as means to visualise the chaos that governments can initialise. The song is basically one giant middle finger to US foreign policy, Manifest Destiny and the “landlords and power whores” that run the show. Morello’s lethargic riff in the verses is intoxicating and prominently foreshadows what the listener can expect from him.

‘Take The Power Back’ sheds light on Commerford’s enthralling bass tone and beautiful slap-bass technique. Meanwhile, De la Rocha demonizes the education system and media for spreading misinformation and lies with lines like “So-called facts are fraud” and “One-sided stories for years and years and years.”

But the abhorrence that De la Rocha has towards the media does not stop there. ‘Bullet In The Head’ metaphorically compares the media to Alcatraz and as a form of virtual brainwashing. The line “They say jump and you say how high” refers to the public blindly accepting everything news outlets throw at them – a believe-it-or-else mentality, if you will. The first half of the song is a laid-back rap segment that Morello lights up with his booming guitar chords. Conversely, the second half reveals the album’s Sabbath-esque heavy metal tendencies under one tight and united breakdown. This song is considered to be one of the album’s greatest moments that isn’t ‘Killing In The Name’.

If there’s one track on this album that is wickedly underrated, it’s ‘Township Rebellion’. Wilk’s cowbell is subtle in presence but has a huge impact on the delectability of La Rocha’s verses. Here, La Rocha goes full-on raise-fisted as he fights back the injustices of white supremacy using the Apartheid as a key example where townships were reserved for the non-white population of South Africa. The line “Fight the war, fuck the norm!” emphasises that this segregation was once a normal everyday occurrence in South Africa – a line that also crops up in ‘Know Your Enemy’. This track contains Morello’s best guitar solo on the album due to the hypnotizing, effervescent effects that illuminate so brightly.

All of the tracks on Rage Against The Machine are brilliant in their own right and revel in their own individual uniqueness. But the one track that will always be remembered by fans as Rage’s magnum opus is, of course, ‘Killing In The Name’. Now jokingly considered to be one of the world’s greatest Christmas songs, ‘Killing In The Name’ morphed rock into something that did not involve having to put on ton of makeup and blast out the same old recipe of catchy power chord sequences with an over-sanitised guitar tone. In 2009, thanks to a successful Facebook campaign started by part-time Radio DJ Jon Morter, ‘Killing In The Name’ beat that year’s ‘The X Factor’ winner Joe McElderry’s Christmas single and took the no.1 spot once again because enough people downloaded the song – Rage themselves did the right thing but announcing that the unexpected proceeds would go to homelessness charity Shelter. Furthermore, anything to displease Simon Cowell is always worth a gleeful celebration.

‘Killing In The Name’ brought back sludge, grit, depth and jollity to rock in its five-minute run time. The way the song shifts from tempo to tempo adds some lovely intricacy to the framework. The rhythmic introduction displays the band’s strong musicianship right from the off then all hell breaks loose after De la Rocha sings “Killing in the name of…”. Wilk expertly keeps up with the sudden dynamic stints that show just how good of a drummer he is. The anti-KKK messages in ‘Killing In The Name’ are rife as La Rocha warns everyone that any public servant could be a secret member (“Some of those who work forces / Are the same that burn crosses”) but “wearing the badge” seems to place importance on police officers. The famous outro line “Fuck you, I won’t do what you tell me” holds more rock legacy than any ‘80s hair metal album – that’s a fact!

In the years subsequent, RATM would release two more great albums (1996’s Evil Empire and 1999’s The Battle Of Los Angeles) and a sub-standard cover album Renegades in 2000. Naturally, the political activism and controversy remained as an everlasting label for the group as events like performing at the Wall Street Stock Exchange in the ‘Sleep Now In The Fire’ music video and Commerford being arrested for disrupting Limp Bizkit’s acceptance speech at the 2000 MTV Music Video Awards. Commerford said to Rolling Stone that he was “sorry for Limp Bizkit” and that he felt “really bad that we inspired such bullshit”.

In terms of inspiration, Rage Against The Machine is sublime. Yes, maybe Limp Bizkit may have never existed had this album not been as successful as it was. But then looking at Linkin Park, System Of A Down and even Muse, this album unleashed the inner rage of so many great artists of today. Arguably, it’s Run The Jewels who now keep Rage’s flame alive in 2017 – a group with whom de la Rocha has collaborated with more than once. What’s even better is that their debut has aged phenomenally well because it still has a part to play in the coagulated mess that is modern global politics. Until the world becomes the peaceful and loving utopia that we all want it to be, Rage Against The Machine is not going anywhere.