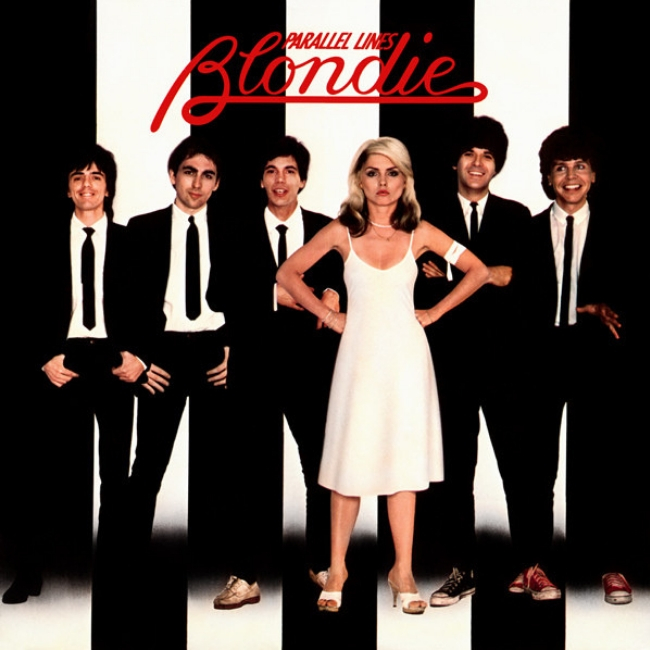 In the annals of popular music, there can’t be many more perfect synergies of sonic and visual aesthetic than Parallel Lines, the third studio album by Blondie. Not only was it their red letter day in terms of their self-realisation and the perfection of their style, but it also took them from fashionable new-wave newcomers to global pop superstars in one fell swoop, containing a large number of their most famous tracks.

Eschewing their roots at the city’s punk crucible CBGB’s and setting a course for the mainstream with a collection of ringing guitar-pop and a slick marketing campaign, which eventually bore fruit with the trans-Atlantic no.1 success of disco-aping masterpiece ‘Heart Of Glass’, the album itself is an encapsulation of the state-of-the-art of pop and rock as it existed in 1978. Crucially, Parallel Lines landed just in time to help shape new-wave and indie-pop as it would be understood in the 1980s with the MTV revolution.

However, despite the fact that everything about it suggests it might have landed in a heavenly burst of harmonious inspiration, the story behind Parallel Lines was pretty stressful for Blondie.

Having worked with Richard Gottehrer for their first two LPs, yielding their first proper hit ‘Denis’ and framing the band’s sound in the same kind of trappings as many other CBGB’s acts, Blondie encountered Chapman, an Australian producer, in California earlier in 1978 while touring their second record Plastic Letters. While the group was at first sceptical of his background in glam-rock, manager Peter Leeds strong-armed Chrysalis into allowing him to work with Blondie, thinking he could help them make a more diverse and less uniform album.

Recorded in New York City at the height of a sweltering summer, Parallel Lines initially ran in to problems at the start of the process when Chapman, a seasoned professional used to working with high-profile artists at the height of the glam era in the early ‘70s, felt Blondie weren’t taking things seriously.

“Musically, Blondie were hopelessly horrible when we first began rehearsing for Parallel Lines,” he recalled in 2008, “and in terms of my attitude they didn’t know what had hit them. I basically went in there… and said, ‘You are going to make a great record, and that means you’re going to start playing better’.”

However, things then started to fall into place. Parallel Lines was finished within six weeks, despite the label giving them six months (a relative eternity in the ‘70s) showing the faith that Chrysalis had in their signings. Three music videos were made for the album’s American singles – ‘Sunday Girl’, for some reason, wasn’t even released in the States despite being a British chart-topper – in a co-ordinated marketing campaign.

Where their first two albums, 1977’s Blondie and 1978’s Plastic Letters, had used art-school hooks on which to hang their songs, Chapman’s conscious approach on Parallel Lines had been to get Blondie to focus on riffs and melodies, allowing their natural pop smarts and ’60s influences to shine through. As a gamble, it ended up paying off beautifully, notwithstanding the various butting of heads that happened in the studio between band and producer and among the musicians themselves.

While the songwriting on display, a combined effort of Harry, Stein, the rest of the group and a handful of cover versions, is absolutely bulletproof, it’s Debbie Harry who is the undisputed star of Parallel Lines. Her vocals, which range from the coquettish purr and pout of gentle new-wave pop gems like ‘Picture This’, ‘Pretty Baby’ and ‘Sunday Girl’ to the unfuckwithable confidence of ‘Heart Of Glass’ and the bratty sneer she displays on ‘Just Go Away’ and ‘Hanging On The Telephone’, are a consistent marvel. A mannered and complex frontwoman with a deceptively simple façade, Harry is equally at home in the open spaces of ‘Fade Away And Radiate’ and ‘Heart Of Glass’ as on the album’s headstrong, straightforward rock moments.

That versatility extended to her looks and physical performances on stage – she wasn’t presented as an unobtainable fantasy, but neither was she sold as some approachable girl-next-door – and her image was something that she kept control of throughout Blondie’s golden years, always forthright and eloquent in interviews and not prepared to let her male colleagues to talk on her behalf. Already in her thirties by 1978 – unusually old for major-label standards even now, where women no longer in their twenties still seem to become invisible – her success fronting a major rock act, and her instantly recognisable look that’s endured for decades and inspired countless subsequent female artists, seems even more pioneering as time goes on, flying in the face of established industry logic back then.

‘Hanging On The Telephone’, a cover of an obscure pop-punk diamond by The Nerves, opens Parallel Lines with 2:22 of raucous new-wave electricity. While it’s not a Blondie original, to all intents and purposes it belongs to them in the public’s consciousness, and lays down the tone for the rest of the record – artiness pushed aside for sheer pop joy. ‘One Way Or Another’, a recently rediscovered classic of the era boasting a brilliant pop riff, was written by Harry and the group’s newly recruited British bassist Nigel Harrison, maintains the pace before Blondie begin to explore things at a slightly slower rate.

‘Picture This’, one of the most tender love songs of the entire era that still manages to stick to the art-pop template, served as the lead-off single for Parallel Lines, and gave Harry the opportunity to open up her voice to a wider range. ‘Fade Away And Radiate’ slows things down to something more suited to arena-rock, with Robert Fripp’s guest guitar adding to a heady Roxy Music-indebted atmosphere that spotlights Harry’s voice further. Again, her vocals are the star of ‘Pretty Baby’ in a consecutive trio of incredibly catchy pop moments.

The weaker moments of Parallel Lines ­– or rather, the songs that simply aren’t the top tier – are only weak by comparison, and could easily have served as singles on other Blondie albums or for some of their inferior new-wave competitors. Many of them sit back-to-back in the centre of the album, being the run of Frank Infante’s stylish but by-numbers ‘I Know But I Don’t Know’, Jimmy Destri’s dramatic, tense and Strokes-y ’11:59’ and another Nerves cover ‘Will Anything Happen?’. The Buddy Holly cover ‘I’m Gonna Love You Too’ might be disposable, but it’s executed with such joy and panache that it fits nicely after two classic singles as the penultimate song.

Those two tracks, ‘Sunday Girl’ and ‘Heart Of Glass’, both hit the top of the British charts in 1979. The former spent three weeks at the summit and ended up as the year’s eighth best-selling single, and unsurprisingly so, as it was arguably Blondie’s most maddeningly infectious hit yet. Harry’s soft, cooing voice slides smoothly over the restrained, elegant new-wave of the mix. That’s followed by the immortal indie-disco of ‘Heart Of Glass’, one of the very highest echelon of Blondie hits and still a guaranteed floor-filler in 2018.

‘Heart Of Glass’ had existed since 1975 in demo form, but Stein and Harry’s various experiments with it as a ballad or as reggae didn’t make sense. Their decision with Chapman to revive it with full-on disco makeover met initially with resistance from the rest of the group, particularly drummer Clem Burke who had difficulty performing the rhythm, but the robotic rustle and shuffle of his technique lend it the sophistication it required to be pulled off, like a mix between Kraftwerk and the Saturday Night Fever soundtrack. Taking a minimal motorik pulse and making it into a sensual, pulsing classic, Harry’s breathy vocals, reminiscent of Donna Summer’s amazing performance in ‘I Feel Love’ the previous year, also pile on the glamour to make an alluring overall mix – in all six different versions it came to be released in!

Despite briefly facing ridicule from other guitar-toting artists, the trend of rock artists wanting to experiment with dance music largely stems from undeniable success and enduring popularity of ‘Heart Of Glass’. It also displays Blondie’s ability to successfully interpolate elements of completely different genres (or ‘appropriate’ them, if that’s your view) and thus help bring them into the mainstream – something they also did with reggae in 1980 (‘The Tide Is High’) and rap (‘Rapture’ in 1981).

The entire aesthetic of Parallel Lines, as is the case with quite a large number of classic albums, is utterly bound up with its front cover. That iconic duo-chromatic shot of sharp blacks and whites, photographed by Edo Bertoglio based on idea their manager Peter Leeds had come up with, is a throwback to the monochrome simplicity of the 1960s. The image marries sophistication with streetwise grit, as an impassive, stoic Harry is flanked by her male colleagues, and it went on to practically define a fashion for a new generation of bands and music fans – skinny ties and Converses.

Blondie had established themselves as hitmakers in Britain and mainland Europe over a year before the release of Parallel Lines, but their third record finally allowed them to make serious headway in their own country, as the American market opened up with the chart-topping success of ‘Heart Of Glass’. Furthermore, in the still sniffy world of mainstream rock criticism, it was also an indisputable classic LP to go alongside a succession of brilliant 7” singles, meaning that they were taken seriously and not just dismissed as pop merchants from this point on.

By its 30th anniversary, Parallel Lines had sold roughly 20 million copies worldwide. It also acted as a wider battering ram for the new-wave genre to reach a mass audience in the United States, taking the demi-monde of New York’s CBGB’s scene into the mainstream, with the likes of Talking Heads and Devo become popular by the end of the Seventies. Madonna, also, was surely watching Debbie Harry’s beguiling performance artistry with interest. Simply put, 40 years of subsequent American pop – and no small amount of British indie and rock – can’t be explained without Parallel Lines.

Listen to Parallel Lines by Blondie here via Spotify, and tell us what you think below!