‘Wrapped Up In Books’ – Good Reads About Music and Bands 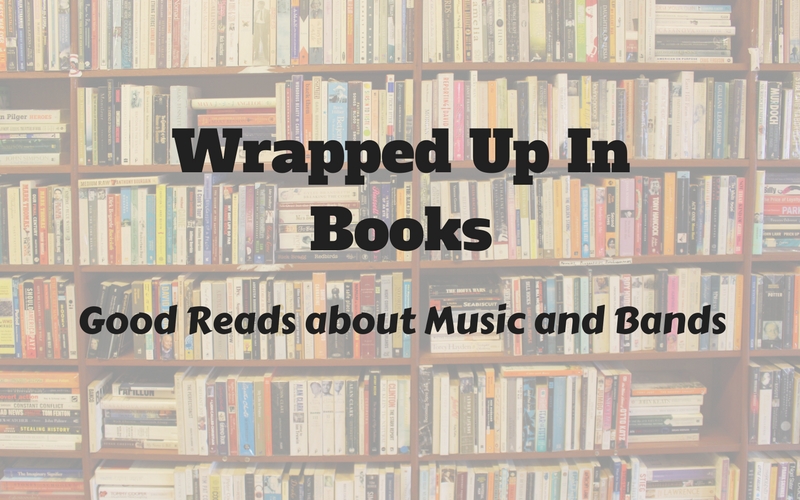 As separate artistic media, music and reading go hand-in-hand. At their best, both require the consumer to fill in the gaps with their own imagination. The reader imagines the physical world that the written words in black-and-white on the page are describing, and the listener can close their eyes and imagine the place, action or emotion of the music. Everyone’s individual interpretations are different (this is why the film, as the legend goes, is never as good as the book), and that’s also true of music. Often your experience is informed by what you bring to the table.

To mark 2018’s World Book Day on March 1st, let some of The Student Playlist’s staffers take you through their favourite music-related books. Reading can set you free, boys and girls.

A little bit more on the academic side, but ‘Notes from Underground’ is an amazing historiographical and sociological study of the rock counterculture of the Soviet Union, featuring many new interviews with Soviet rock musicians. Everyone knows about the Cold War and it is easy to assume that cultural life in the USSR would be so alien to us, but fact it is more similar than you would imagine. This study allows you to learn about the state pressure exerted against the Soviet rock underground, and understand why and how such a huge rock scene emerged despite being in such a repressive and intolerant society. (Sandie Garland)

‘Inside the Music: Conversations with Contemporary Musicians about Spirituality, Creativity and Consciousness’ by Dimitri Ehrlich (1998, Shambhala)

While trying to find out whether the American experimental composer Meredith Monk intends a sense of spirituality in her music, I came across Dimitri Ehrlich’s ‘Inside the Music’. This array of contextualised pieces about artists as diverse as Allan Ginsberg, Moby and Philip Glass shines a softer light on artistry in places one would not always expect to find religiousness or spirituality. Mick Jagger never struck me as that kind of guy when all I knew about the Stones is their scandalous public image! The conversations, especially the one with Jeff Buckley, have an air of vulnerability and, while the personal bond with the artist one feels after reading is probably delusional, ‘Inside the Music’ is an immersive, satisfying read following exceptional figures of the late ‘90s/’00s. (Aiste Samuchovaite)

Books about David Bowie are ten-a-penny – literally, in this case, as I picked up this dog-eared tome for 20p in a closing-down sale – but arguably the finest is this turn-of-the-millennium biography by David Buckley, run very closely by Paul Trynka’s excellent ‘Starman: The Definitive Biography’ from 2011. It’s a story that has always been legendary, but Buckley’s gripping re-telling of familiar events, as well as a proper in-depth analysis of the Bowie discography album by album, make ‘Strange Fascination’ an indispensable part of any music lover’s library. (Ed Biggs)

‘Songs in the Key of Z: The Curious Universe of Outsider Music’ by Irwin Chusid (2000, Cherry Red Books)

Have you ever been bored with the mainstream music and wanted to take a journey into the strange? Well… you aren’t alone. I discovered this book in my second year of university and haven’t looked back; ‘Songs in the Key of Z…’ is a delightful tale which chronicles a plethora of terrific artists. Yes, there’s the obvious names – you have your Shaggs, Daniel Johnston, and your Captain Beefheart. But in this book, you can learn about the enigmatic Jandek, the bizarre Shooby Taylor and so much more. This is a book with heart; it doesn’t judge or mock, it embraces the weird and wonderful world of Outsider Music and to do this day remains the definitive piece about just what this abstract world entails. (John Tindale)

Check out a Spotify playlist of Outsider Music here!

‘Heavy Metal: The Music and its Culture’ by Deena Weinstein (2000, Da Capo)

Deena Weinstein explores and analyses the heavy metal genre; its relationship with its devoted worldwide fanbase and the media; aspects of its culture; and why the genre has survived and remained influential all these years. In addition, Weinstein goes into depth about the impact of heavy metal live shows and how the concept of the music video plus the launching of MTV changed how fans interacted with the music in the ‘80s. This book is an eye-opener to not just metalheads but to everyone, whether they hold negative stereotypes against heavy metal or are passionate music listeners whose knowledge on the genre is limited. (Harry Beynon)

Nirvana releasing ‘Smells Like Teen Spirit’ was of course the biggest pop watershed moment of the Nineties, but that cultural moment can’t be explained without looking at what came before. Michael Azerrad offers a brilliant analysis of the American indie scene in the 1980s, a sprawling network of labels, fanzines, college radio stations that defiantly sprang up under the nose of the Reagan era, told via in-depth profiles of 13 of the decade’s greatest bands – including Black Flag, Sonic Youth, Hüsker Dü, Minor Threat and Dinosaur Jr. For anybody who loves the independent, DIY, ‘grass-roots’ ethos in culture in general, ‘Our Band Could Be Your Life’ is simply one of the most inspiring books you’ll ever pick up. (EB)

A meticulously researched book for anybody looking to understand hip-hop’s basics, Jeff Chang analyses its roots in Jamaican reggae and dub, then goes from its origins with DJ Kool Herc and Afrika Bambaataa in the Bronx, its commercialisation with ‘Rapper’s Delight’, its maturation through New York-based titans like Run-DMC and Public Enemy, and then to the commercial explosion on the West Coast in the ‘90s with N.W.A., Ice Cube and The Chronic. But much more than just the music, ‘Can’t Stop, Won’t Stop’ offers up detailed socio-economic and political backdrops for the context in which hip-hop was born and subsequently evolved over three decades. (EB)

Cool, louche, floppy-haired and with a cigarette hanging out of his mouth on stage, Blur’s bassist Alex James was one of the most identifiable personalities in Britpop – the accidental musician who counted himself lucky to be there and was intent on enjoying every single second of it. His 2007 autobiography captures the creativity and madness of the mid-Nineties in the British music industry, written in a hilarious, hungover and often touching manner. (EB)

A follow-up to their famous ‘Manual’ published five years earlier, ‘The Tao of Wu’ describes the philosophy, life, and career of the RZA, the founder and producer of the legendary Wu-Tang Clan. It’s an eclectic but compelling mix of street philosophy, etymology, hip-hop lyrics and religious doctrine, all which RZA claims inspired him over a ten-year span. This strange and insightful sneak peek into his mind also answers one of the biggest questions of hip-hop culture – how and why were a rap super-group from Staten Island pre-occupied with Chinese martial arts? (Benita Barden)

Simply put, this book will change the way you listen to music. David Byrne takes apart ideas about genre, elitism, and the way the music industry operates, and ‘How Music Works’ will give you a whole new understanding of how we listen and react to sound. (Louis Marlow)

Where to even start with this? As a member of English indie-dance auteurs Saint Etienne and formerly a writer for NME and Melody Maker, Bob Stanley has been steeped in pop music culture for decades. His first full-length book is an incredibly ambitious and rewarding work, spanning seven decades from the Second World War to the internet age, from the origins of rock’n’roll to modern chart music and covering virtually every revolution in between – The Beatles, psychedelia, punk, rave and hip-hop. It’s a pretty thick tome at over 700 pages, but Stanley’s whistle-stop tour approach, told with precision and arch wit, means that it’s never boring and acts as a brilliant beginner’s guide to practically every aspect of pop music history. (EB)

This book recounts the London punk explosion of the 1970s from a woman that was integral to the movement. Viv Albertine’s memoir reflects on the highs and lows of her personal life, and her music career and journey with The Slits. You don’t even need to know who The Slits are to enjoy this book (clue: they’re amazing), but you’ll be obsessed by the time you’ve finished. (Jesse Casey)

‘Psychedelia and Other Colours’ by Rob Chapman (2015, Faber & Faber)

The most detailed, intricate, and not overtly nostalgia-tinged read about the equally celebrated and misconstrued era of the Sixties and the psychedelia scene of that time. We’re about 100 pages in before we reach bands on the canonic level of Jefferson Airplane and the like, as Chapman takes careful notice to include discussions on the avant-garde cinema, art, music, and general media of the time. A must-read for anyone interested in the details of the decade, especially those outside the main, mythologised parties of the Haight-Ashbury scene or Soho. (Also, how funky is the cover art?) (Ellie Wolf)

I’m Not With The Band is the autobiography and memoir of one of Britain’s most accomplished and well respected music journalists, Sylvia Patterson. With a career spanning almost four decades, Sylvia has more than a few cautionary, often highly amusing tales of her time knee-deep in the British music press. Born in Perth, Scotland, Patterson cut her teeth with Smash Hits in the late ‘80s before trading glossy pop for the male-dominated NME newsroom. The internet age saw Patterson move to a freelance role for Glamour and Q, the latter of which she still writes for today. Written in her famously brilliant vernacular, she tells tales of her most famous meet-and-greets with some of the world’s finest and most demanding celebs – alongside navigating her often tricky personal life.

Hilarious anecdotes include a vomit-induced meeting (of sorts) with a pre-famous Liam Gallagher, a blush-inducing eavesdrop on New Order’s bedroom antics, insulting Madonna by asking if she ate her placenta after childbirth (who doesn’t?), achieving an audience with Prince and trying hard to make him crack a smile… as well as secretly stalking Mick Hucknall. I’m Not With The Band highlights the significant and challenging shift in music journalism through the internet age and the reasons why music has become so commodified and almost brand-like. Most importantly, Sylvia highlights that through adversity comes strength, determination, and ALWAYS a love of music. She has all of these in spades. (Matthew Langham)