WOMEN IN ROCK no.1: Amanda Palmer 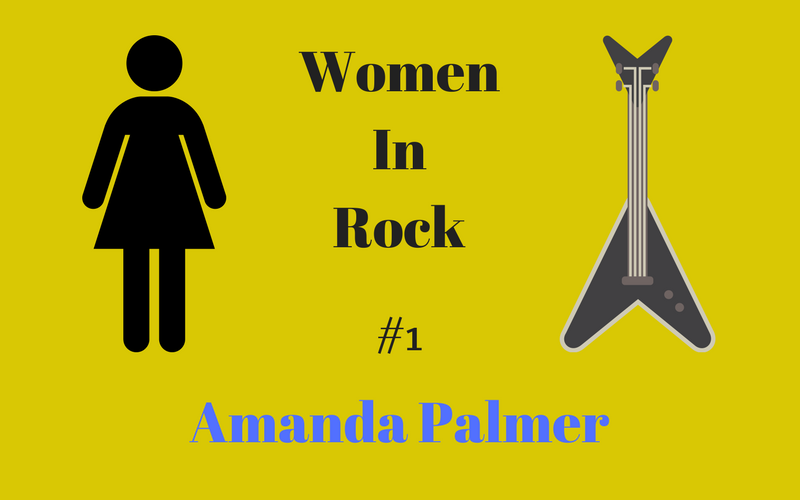 Amanda Palmer has come a long way since her beginnings as a human statue in Boston. She performed as an eight-foot bride, armed with a painted white face and three milk crates, handing out flowers to those who tipped her. Since then, she has found success as half of the punk-cabaret band The Dresden Dolls, as a solo artist, as a writer (her book The Art of Asking was published in 2014), as a TED speaker, as a ‘ninja gig’-er, and in many other endeavours.

But one of the things that really sets Amanda Palmer away from the rest is her relationship with her fans. This started with her days in The Dresden Dolls where she would maintain email relationships with her fans, laying the foundations for the community that would eventually lead to her 2011 Kickstarter campaign with Amanda Palmer and the Grand Theft Orchestra for the Theatre Is Evil album totalling almost $1.2million. Her fans also now act as a source of income via her Patreon. Patreon is a crowdfunding platform where creators get paid per ‘thing’. At the time of writing, Amanda Palmer is currently earning $35,852 per ‘thing’, courtesy of her 9,320 backers.

The Dresden Dolls formed in 2000 with Palmer on lead vocals and keyboards, and Brian Viglione on drums and backing vocals. Together, they produced four studio albums before parting ways in 2008. They were known for their cabaret aesthetic and elaborate live performances which were, again, very focused around their friends and fans. They would encourage their fans to become part of their shows as stilt walkers and fire breathers – as performance artists. The band would also engage with their fans for hours after the show had finished to sign merch and share stories, something that Palmer continues to do to this day. But most of all The Dresden Dolls are remembered for their uniqueness, not only in their relationship with their fans, but also, of course, for their music, with songs such as ‘Girl Anachronism’ and ‘Coin Operated Boy’. Due to the success of Palmer’s Patreon, The Dresden Dolls reunited for two shows back in August 2016, and even shared a live webcast of their show at the Coney Island Amphitheatre.

This is just one of the projects that Amanda Palmer has created from her Patreon. Other ‘things’ include songs such as ‘Machete’, ‘A Mother’s Confession’, and the hilarious eight-minute ‘On The Door’ with Brendan Maclean. As well as songs she has also released an album with her father Jack Palmer entitled You Got Me Singing, and an EP with Jherek Bischoff (who played with her in the Grand Theft Orchestra) of string covers of David Bowie songs after he passed away last year. But it is not just music that her patrons fund, other ‘things’ have also included the human statue performance art piece outside New York Public Library in 2015 where she stood naked and eight months pregnant at a children’s book rally, the Patreon has also funded music videos such as the beautiful Wynken, Blynken and Nod (from the father-daughter album), various webcasts, and her upcoming album with Edward Ka-Spel of The Legendary Pink Dots I Can Spin A Rainbow, due for release on May 5th.

The Patreon is the perfect follow on from Amanda Palmer’s 2014 book The Art of Asking. The book functions as some kind of amalgamation of a biography and a self-help book, with tips on how to use the internet to your advantage. The Art of Asking was also the title of Palmer’s 2013 TEDtalk where she discusses how herself and Brian Viglione made an art out of asking people to help them. Palmer speaks openly about how much her fans have helped her throughout her career, in everything from sofas to sleep on while touring, three-syllabled song lyrics for ‘Ukulele Anthem’, and the Kickstarter campaign for the Theatre Is Evil album. The goal for this album was $100,000, and as previously mentioned this actually ended up totalling over $1,000,000.

But how is it that she has achieved this relationship with her fans? By remaining real. The façade is completely broken down when it comes to Amanda Palmer. She’s not an untouchable celebrity, she’s a real person. And it’s an exchange. In her book, Palmer discusses the numerous house parties that she played at for those who had pledged $5000 or more to her Kickstarter campaign, and the time she has spent actually getting to know her fans in real time, over real coffee, and even now with she offers to patrons who pledge $1000 or more (limited to one patron only) the promise that ‘we’ll talk. We’ll have dinner. All the things, pretty much. Thank you’.

AFP – that’s Amanda Fucking Palmer to you! – communicates regularly with her fans via her blog, mailing list, and social media, and with communication comes trust. Trust to the point where at one gig Palmer literally laid herself bare in front of a drunk German audience and let them write all over her naked body. She also surprises her fans, with spur of the moment ‘ninja gigs’, which are tweeted about last minute and Palmer and her fans show up, play music, share stories, and exchange love and art.

Palmer is legendary for a number of different reasons, not just for her music and artistry, and not just because of the unique sense of community and kinship that she has with her fans. Palmer has revolutionised the way that the music industry works. Theatre Is Evil was the most financially successful crowdfunded music campaign of all time, but to balance the scales back from the help she receives from her fans towards creating new material, she also offers her music for free via her website. Stating that this way she isn’t making people pay for her music, she’s asking them to. And although she is often a victim of critics (see: Dear Daily Mail), the industry could certainly use a few more Amanda Palmers.

Check out our ‘Introduction to Amanda Palmer’ playlist via Spotify here!