“We Are Strange In Our Worlds” – An Introduction to Supergrass 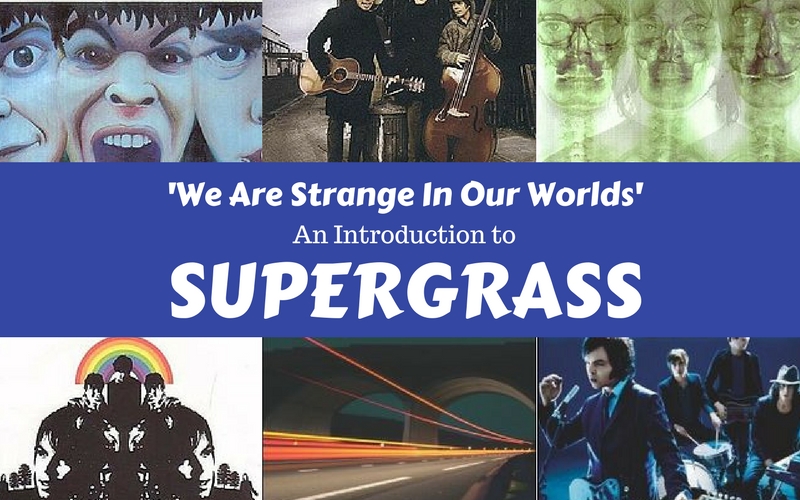 Simply, one of the most joyously fun debut albums of all time. The group were barely out of their teens upon the release of I Should Coco, and they slash and burn their way through 13 songs at the kind of breakneck pace that only the irrepressible energy of youth can fuel. ‘Mansize Rooster’, ‘Caught By The Fuzz’ and ‘Alright’ are only the very best moments in a rapid-fire succession of KO punches. But while that suggests a two-dimensional approach, there’s already hints of maturity and darkness lingering in Gaz Coombes’ invigorating songwriting, particularly ‘Time’ and ‘Sofa (Of My Lethargy)’. Nominated for the 1995 Mercury Music Prize, bagging Supergrass a ton of best newcomer awards and going on to sell more than a million copies around the world, this type of debut album has rarely been done better than I Should Coco. (9/10) (LISTEN)

After striking pop gold with their debut, Supergrass gave a masterclass in how to make a great second album. In It For The Money saw the band slow the pace considerably, which brought the quality of their songcraft to the fore and gave rise to a collection of varied, textured songs in both sound and mood. The bright, noisy explosions of hit singles ‘Richard III’ and ‘Sun Hits The Sky’ proved that they still had the same punk energy, of course, but it was more thoughtful and expressive tracks like ‘Late In The Day’ and ‘It’s Not Me’, with expertly detailed production from John Cornfield (later to work with Muse, Razorlight and Athlete) that lent their sophomore effort the substantial weight that was needed at this point in their career. Achieving the same sales figures as its predecessor, In It For The Money was another huge success story both commercially and artistically. (9/10) (LISTEN)

Setting themselves such a high standard with their first two records was probably inevitably going to trip Supergrass up in the end, and so it proved to be with their third album, an eponymous mixed bag of fabulous singles, curious gems and indifferent shrugs. The flamboyant glam-stomp of ‘Pumping On Your Stereo’ and the plangent beauty of ‘Moving’ notched up two smash hit singles for the band, and there were moments of refreshing playfulness such as the bonkers ‘Jesus Came From Outta Space’. Unfortunately, in too many places Supergrass lacks the same sparkle and effortless sense of invention that characterised its two predecessors. For every rare beauty like the harpsichord-driven ‘Your Love’, there’s a rather laboured moment like ‘What Went Wrong (In Your Head)’ or ‘Beautiful People’. Plenty to like, but not much to love. (6/10) (LISTEN)

Feeling that their last effort had led them into a cul-de-sac, Supergrass decided to shake things up in the new millennium, swapping out John Cornfield for American producer Tony Hoffer behind the desk. The resulting collection, and how it underperformed commercially, was a reminder of just how easy it is to take a great songwriting unit like Supergrass for granted. Slipping a bit under the public’s radar in the context of the Strokes/Libertines-led guitar revival, Life On Other Planets was stocked with melodic guitar-pop nuggets influenced by glam and new-wave, with Hoffer helping them reclaim the sheen and vitality of their finest singles thus far. With the shooting star of lead single ‘Grace’ and the T.Rex-ified rockers ‘Seen The Light’ and ‘Brecon Beacons’, this was the sound of an underappreciated band quietly being awesome while people looked the other way. For shame. (8/10) (LISTEN)

Entering their second decade with their reputation fully restored in the wake of their Supergrass Is 10 extravaganza, the group decamped to France to re-think basic principles and start afresh. Working with yet another new producer in Pierre-Olivier Marger, Road To Rouen masters a sense of control and focus that none of their previous albums had only really hinted at, with all their youthful exuberance. Here, Supergrass lock down an idea and ride it all the way through to its natural conclusion. Although it contains only nine songs in just over 35 minutes, it houses two of the band’s longest and most sprawling songs yet, in the opening ‘Tales Of Endurance, pts. 4, 5 & 6’, with minor-key piano motifs from the underappreciated Rob Coombes, and the excellent ‘Roxy’. However, the old mischievous fun is still there, only a little more downcast, on the languid single ‘St. Petersburg’ and folky inflections of ‘Low C’. A very different kind of Supergrass classic. (8/10) (LISTEN)

For what turned out to be their final album, Supergrass did another typical volte-face in mood and tone between albums. After the contemplative soul-searching that took place on Road To Rouen, they teamed up with experienced rock producer Nick Launay, who brought a sense of grit to their typically impish humour for sixth album Diamond Hoo Ha. Hard-edged rock tracks are the order of the day, with the Stooges stomp of ‘Bad Blood’ made for the last classic Supergrass single and the sorta-title track ‘Diamond Hoo Ha Man’ tapped in to prime-time White Stripes. But ultimately, Diamond Hoo Ha suffers on two counts – a lack of truly memorable songs, and a nagging feeling that they’re trying too hard to play up their sense of humour. Where their finest moments were completely natural, on the likes of the brassed-up ‘Whiskey & Green Tea’ it feels too stylised and forced. (6/10) (LISTEN)

Tags: An Introduction to, Danny Goffey, Diamond Hoo Ha, Ed Biggs, Gaz Coombes, I Should Coco, In It For The Money, Life On Other Planets, Mick Quinn, Road To Rouen, Rob Coombes, Supergrass, We Are Strange In Our Worlds