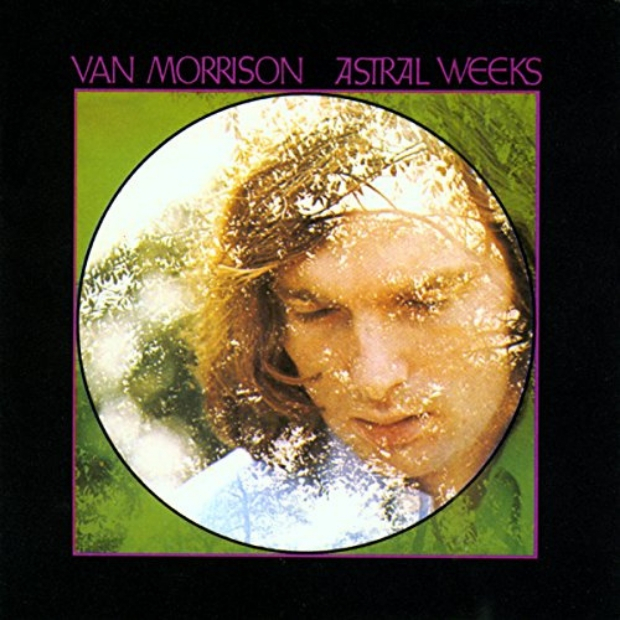 In terms of unexpected career shifts and surprise new directions in the history of pop, Astral Weeks, the spellbinding second album by Van Morrison, serves as a textbook example. In the context of a 1967 in which Morrison had enjoyed a massive hit as a breakout solo artist, the effortlessly breezy karaoke staple ‘Brown Eyed Girl’, the sprawling Astral Weeks, released just over a year later at the end of 1968, was about as radically different for a major label star as it was possible to imagine. But it’s the hallmark of a truly great artist that he or she uses the platform they’ve gained to challenge their audience to follow them, rather than placate them with dilutions of the same product.

Given its reputation as a hazy, dreamlike and deeply romantic masterpiece, Astral Weeks doesn’t seem to chime with Van Morrison’s infamous reputation as a grizzled, cantankerous and deeply reticent artist who gives little away and suffers fools even less. But it’s part of the enduring magic of the album that it should have been the creation of such a famously private and introverted individual – and, it must be acknowledged, a team of brilliant studio musicians.

Although he had been variously pigeonholed as a rocker – having departed the short-lived Them in 1966 – and latterly as a folk artist and a bluesman, Van Morrison had always displayed a latent interest in jazz. His 1967 debut solo album, Blowin’ Your Mind, while leaning heavily towards the rock and R&B sensibilities that had defined his short career up until that point, did suggest a passion for sprawling, complex arrangements and unconventional structures. With Astral Weeks, he channelled those influences, stemming from his father’s massively diverse record collection of Muddy Waters, Charlie Parker and Woody Guthrie, into something deeply personal.

A complicated scenario meant that, despite being a pop star and one of the hottest properties in music, Van Morrison was still legally bound to Bang Records, who had released his debut and whose boss, Bert Berns, was trying to push the Northern Irish star further in a pop direction, to bitter pushback from Morrison. Berns’ sudden death at the end of 1967 led his business dealing to fall to his widow, Ilene, who blamed Morrison for her husband’s fatal heart attack and led a campaign against the singer. Stranded in New York, Van Morrison was not allowed to record for Bang and could barely land a gig, despite having a pop smash less than a year old up his sleeve. In fact, he was only able to stay in the US at all after his American girlfriend, Janet Rigsbee, married him to avoid him being deported.

With the help of the more artist-friendly Warner Bros., whose A&R men saw immense promise in some of the few shows he had put on in Massachusetts in early 1968, an arrangement was struck with Bang to discharge the worst of Morrison’s obligations – involving a quick-fire album of 36 nonsense songs – and also to put him in New York’s Century Sound Studios with producer Lewis Merenstein, a man who had worked with several jazz legends over the previous 15 years.

The chemistry was virtually instantaneous. Merenstein later said, of the title track ‘Astral Weeks’ and hearing its rehearsal for the first time: “Thirty seconds into it, my whole being was vibrating, because having spent all that time with jazz players, when he was playing, I could hear – the lyric I got right away; I knew he was being reborn. I heard thirty seconds, a minute and it went right through me, and I got the poetry of it. It was just stunning, and I knew I wanted to work with him at that moment. He went on and played more things, various tunes. And I guess everything was agreed on…”

In addition to the experience of Merenstein, there was a musical marriage of convenience that allowed him to reach peaks he’s rarely reached since. Van Morrison plays acoustic guitar and sings in his elastic, bluesy, soulful voice, but he’s accompanied by crack group of jazz studio players: guitarist Jay Berliner, upright bassist Richard Davis, Modern Jazz Quartet drummer Connie Kay, vibraphonist Warren Smith and soprano saxophonist John Payne. By all accounts, the relationship between Morrison and his backing band was virtually telepathic, with the singer and musicians both displaying a flair for improvisation, recording taking comparatively little time and requiring few takes.

A drastic departure from the pop hits of ’67, Astral Weeks offered Van Morrison’s newly acquired fans a laconic, swirling brew of folk, blues, jazz, classical, chamber-pop and blue-eyed soul. Backed by that brilliant ensemble of musicians, the album’s eight songs are soulful, passionate ruminations on the singer’s childhood and adolescence growing up in Belfast. They are Proustian rushes of memory of times gone by, of joy and regret, of love and loneliness, framed with freewheeling, loose narratives that are impressionistic rather than strictly descriptive.

Speaking in 2008, Van Morrison was challenged about the songs’ ambiguous meanings. He said they “were from another sort of place – not what is at all obvious. They are poetry and mythical musings channeled from my imagination. They are little poetic stories I made up and set to music. The album is about song craft for me – making things up and making them fit to a tune I have arranged.”

While the backing musicians are faultlessly brilliant – Richard Davis’ elastic bass riffs underpin the beautiful, fluid arrangements to striking effect – Van Morrison’s vocals are always made the centre of attention. He seems hypnotised by the subject matter and the characters that inhabit these songs; they simultaneously comfort and haunt a present filled with inexhaustible longing and loneliness. Frequently, he stretches vowels and phrases to breaking point with passion, sometimes repeating phrases in an incantatory manner until they go almost beyond words and become pure feeling. Pressed on the real meanings behind his impressionistic and modernistic lyrics, Van Morrison himself has often said he fails to truly grasp these songs.

That interaction of musical and emotional elements is depicted on Astral Weeks’ front cover – the squared circle that frames the image of a ruminative Van represents a symbolic union of opposites, of the trials of earth and the redemption offered by heaven. Those dualities are also present in the music – pain and happiness; loneliness and love; nostalgia and looking forward to the future. Everything is shaded in pastel colours, and the music is rendered with soft edges, giving proceedings the feeling of a reverie, of daydreams and recalled memories both painful and pleasant. For the first time, Van Morrison’s spiritual side is displayed, the mystic poet that his image would be based on from hereon in.

The seven-minute opening title track, amazingly captured in just one take, serves notice that Van Morrison has travelled very far from the three-minute salvo of ‘Brown Eyed Girl’. With beautiful opening lines like “If I ventured in the slipstream / Between the viaducts of your dream / Where immobile steel rims crack / And the ditch in the back roads stop / Could you find me?”, he rivalled Bob Dylan as a master of cryptic, elliptical lyrics. The tender love and yearning behind ‘Beside You’, buoyed aloft by understated flutes and Jay Berliner’s fluid classical guitar, showcases that new-found spirituality that’s long since been his strength.

Elsewhere, there’s the lounge jazz of side two opener ‘The Way Young Lovers Do’, which is a bit of an outlier amid the slow-paced reveries of the rest of Astral Weeks and often divides fans and critics alike. However, the swing and relative maximalism of its arrangement gives the album some much-needed impetus and breaks up the pace. The desolate closer ‘Slim Slow Rider’ is a downbeat but economical ending to the record, generally agreed to be about the plight of a young addict caught up in a busy city. ‘Ballerina’, which dates back to the days of Them in 1966, is simplistic on the surface but belies an impassioned and even derange vocal performance from Van Morrison that means it eludes easy interpretation. Only ‘Sweet Thing’ manages to be anything remotely conventional, with its lyrics much more prosaic and direct, about Van’s marriage to Janet.

It’s in the longer songs, however, that the listener truly uncovers the heart of Astral Weeks, as they play to the singer’s strengths as an improvisational performer. The stunning ‘Cyprus Avenue’, which closes side one, is a brilliant hybrid arrangement of jazz and baroque styles, with country-influenced flourishes cut through with an overdubbed harpsichord figure. Here, Van Morrison’s lyrics are stream of consciousness recalling his childhood in Belfast and a teenage crush, set to the context of falling leaves and lonely train drivers in which the singer sounds completely overwhelmed. Live, ‘Cyprus Avenue’ is even now used as a set closer, where Van and his band use the expansive song as a platform for ingenious, soulful improvisation.

Another Belfast-related song, and another of the centrepieces of Astral Weeks, is the ambiguous ‘Madame George’. An impenetrable character study set in the context of landmarks and traditions of Belfast, the subject of the song could be an ageing transvestite, or a composite of several different women. Either way, the sheer wanderlust of ‘Madame George’ makes it seem like it’s taking place during that fleeting period between sleep and wakefulness, and its ambiguity, like the rest of Astral Weeks, means that the listener can project their own meaning onto it in the absence of an obvious narrative or meaning.

Above all, and what keeps listeners coming back to it and also attracts newcomers even half a century later, Astral Weeks remains an enigmatic and fundamentally unknowable experience. It’s not a classic rock masterpiece by any means, yet its seamless constructions of blues, jazz and folk regularly appears right near the top of those occasional lists of the greatest albums ever recorded.

The two 40th anniversary shows at the Hollywood Bowl in 2008, featuring a full orchestra and backing band, represented the first serious time that Astral Weeks had been showcased live, and was captured on a live album and DVD. The reason for those shows’ importance was simple: Warner had barely promoted the record on release back in 1968, effectively dooming it immediately to cult classic status. It sank without trace at the time, particularly in Britain, but in America it gradually became a highly sought-after import as influential critics – particularly Rolling Stone’s Greil Marcus – quickly changed their minds and started singing its praises.

By the time of 1970’s Moondance, Van Morrison had been rehabilitated as a serious star in the eyes of critics and had attracted a slightly different fanbase. That album went three times platinum in America, and contains some of his most recognisable songs. But that success would have been impossible without the foundational work done with Astral Weeks, which, although its sales figures are much less impressive on the surface, can’t tell the story of one of pop music’s most enduring, daring and important LPs.

Listen to Astral Weeks by Van Morrison here via Spotify, and tell us what you think below!