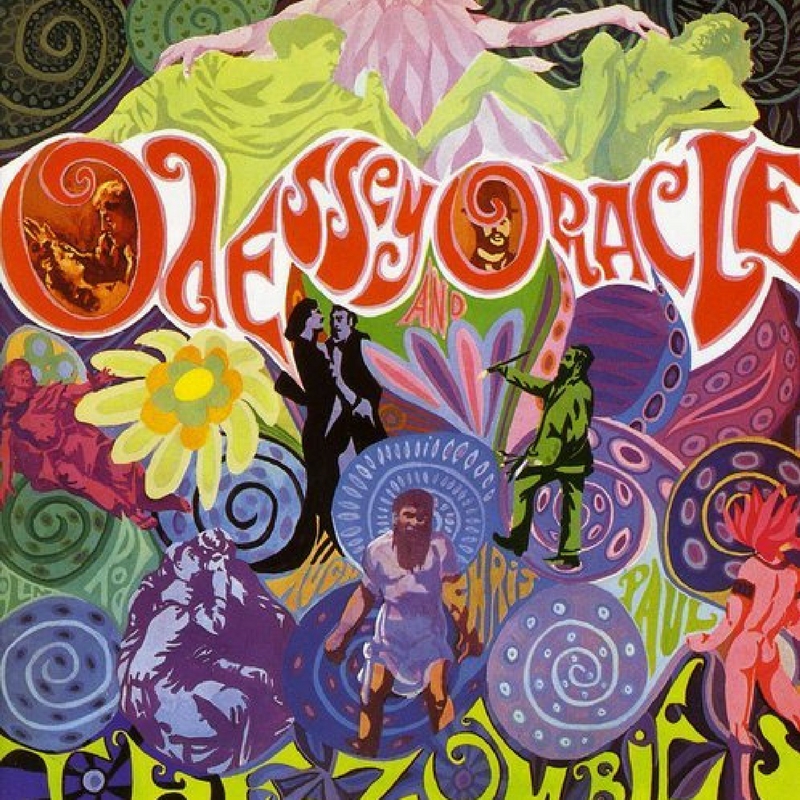 Long praised as one of the great rediscovered works of the late Sixties, The Zombies’ second and final studio album Odessey And Oracle is one of the first few records that spring to mind when one thinks of British psychedelia. Infused with a distinctively English type of chamber-pop tweeness, in the vein of latter-day Beatles and early, Syd Barrett-era Pink Floyd, and the big, bold chord changes of contemporary rock, it was released to popular indifference in April 1968 but quickly attracted a great deal of critical acclaim as the decades wore on, with subsequent generations rediscovering its sense of colourful but low-key inventiveness.

It may have had very little impact on the pop music of The Zombies’ own era, with the rock scene’s obsession with psychedelia and dandyism in 1966-1967 largely dissipated by the following April. The passage of time, and hankering for nostalgia, have made it a widely rediscovered psych-pop timepiece in the same vein as Love’s similarly overlooked Forever Changes. Certainly, it is some of Britain’s most powerful music of the period, and not only has it influenced a wide variety of artists, from hitmakers such as 10cc and The Jam’s Paul Weller to leftfield oddballs like Super Furry Animals and Kevin Barnes’ of Montreal, it’s also an utterly engaging listen even after 50 years and worthy of a place in any record collection.

Formed in the small Hertfordshire town of St. Alban’s in 1963, The Zombies’ career had begun brightly, yielding a huge no.2 hit in America with ‘She’s Not There’ the previous year, and another significant smash in ‘Tell Her No’. Like many British bands of the mid-1960s, they began their career as purveyors of R&B standards, which came through on their professional but limited 1965 debut album Begin Here (released as The Zombies Stateside). However, tracks they contributed to the soundtrack of Otto Preminger’s psychological thriller Bunny Lake Is Missing showed that The Zombies were evolving quickly.

After three years of working together, however, the hits had begun to dry up and their gigs had become marred by discontent in the group. Odessey And Oracle, then, was intended as a last hurrah, with Chris White persuading his four bandmates to stick it out for one final album before ending the group. In this context, they somehow managed to persuade EMI to let them produced the record in the same Abbey Road studio recently vacated by The Beatles where they’d made Sgt. Pepper’s, and without any kind of corporate overlook or aid from producers, working with the scientifically precise in-house team of studio technicians who actually wore white coats.

Despite – or perhaps because of – the foreknowledge of their split, recording sessions for Odessey And Oracle ended up being comparatively peaceful, with the group given completely free reign over the studio’s controls. Notwithstanding the inherent creative friction caused by band members pulling in different directions, they were free to indulge all of their musical fantasies. As such, the end result was one of the lushest patchworks of baroque pop, rock and psychedelia that the late Sixties ever coughed up.

Although Odessey And Oracle is freighted with a reputation as a psychedelic milestone, there’s very little about it that suggests a far-out musical freak-fest designed to spook the straights. Indeed, the group’s surviving members admitted, upon its 40th anniversary in 2008, that they consumed little that was stronger than pints of bitter. Beautiful, radiant production values aside, most of Rod Argent and Chris White’s songwriting is firmly in the same late ‘60s pop wheelhouse as Paul McCartney and Ray Davies. Sonically, it is neatly placed between transatlantic styles, sprawling from the bucolic, pastoral beauty of English summertime meadows evoked by Syd Barrett and the sun-baked, West Coast pop of Brian Wilson, rather than the Haight-Ashbury scene of San Francisco and more stereotypically ‘psychedelic’ artists like Jimi Hendrix. Crucially, it was a cohesive whole, not just a grab-bag of singles and cover versions.

Possibly because of the aforementioned infighting, chiefly between keyboardist Argent with his love of jazz, the rock visions of White, and the group’s pop-focussed lead singer Colin Blunstone, Odessey And Oracle is of a cheerful yet unmistakably overcast disposition, often masking disturbing or unusual subject matter. This is most clear on the sun-kissed, Small Faces-esque melody of opening track ‘Care Of Cell 44’, which begins “good morning to you / hope you’re feeling better baby”, hinting at mental illness. Although the sun is shining in The Zombies’ world, there are storm clouds just lingering on the horizon.

Throughout, the listener gets the uneasy feeling that all is not quite right in this album’s world. Standing out like a sore thumb is the macabre ‘Butcher’s Tale (Western Front 1914)’ is a more direct piece of musique concrete rendered with doom-laden organs, with Chris White’s interest in the First World War brought to bear with a vivid imagination of the horror of the trenches (where “in the heat the flies come down”, told by a narrator whose shell-shock means his “hands won’t stop shaking”) accompanied by stark, nightmarish effects, making it a bold choice for a single release.

In these complex moments, Odessey And Oracle is speaking a prototype of the musical language that would commonly be heard in progressive rock less than five years later, what with the preoccupations with World War I, Shakespearian quotations on the sleeve, the archaic variant spelling of ‘Odessey’ in the album’s title. However, all the disparate active elements of proto-prog, R&B, pop and rock, as represented by the group’s different personalities, serve to check and balance each other out here, kept shackled to the context of sophisticated but comparatively tight pop structures.

On its more conventional songs, the psychedelic element is more prominent, with Argent’s mellotron a key textural component of the sonic tapestry. ‘Maybe After He’s Gone’, a Beatles-esque gem that bears resemblance to ‘Nowhere Man’, while the English countryside references of ‘Beechwood Park’ and the inner mind-scape of ‘Hung Up On A Dream’ are unmistakably lysergic moments, but White and Argent’s detailed songwriting keeps everything grounded. Here, The Zombies offered the listener a temporary escape hatch into an immersive other-world, with perfect, autumnal English pop melancholia seemingly woven out of nothing.

There are also harmony-laden, Pet Sounds-inspired pieces like the multi-segmented ‘Brief Candles’. The baroque, McCartney-esque portrait of a lonely spinster character in ‘A Rose For Emily’, whose “roses are fading now / she keeps her pride somehow” is in keeping with ‘For No One’ or ‘Eleanor Rigby’. A similarly Beatles-y moment comes with the short, zippy ‘Friends Of Mine’ and the romantic optimism of ‘This Will Be Our Year’, the latter built on a joyfully simple piano motif underneath the panoply of studio effects.

The album’s closer is the gorgeous, slinky seduction of ‘Time Of The Season’, unquestionably The Zombies’ signature song and a staple of countless Sixties ‘best of’ compilations. Pitched halfway between a blue-eyed, soul-boy shuffle recognisable to a mod and the peace-and-love hippie aesthetics of 1967, it’s an absolutely perfect barometer of the late Sixties pop scene, both in terms of what it had evolved from, and what it might later turn into. Producer and musician Al Kooper, an erstwhile collaborator of Bob Dylan’s, begged CBS to issue ‘Time Of The Season’ as a single in America more than a year after Odessey And Oracle’s release. It became an enormous hit, reaching no.3 in the Billboard charts, ending 1969 as one of the year’s fifty highest-selling singles in the US and selling two million copies around the world.

Sadly, The Zombies had long since split up, and were unable to capitalise upon ‘Time Of The Season’s success. Various band members embarked on solo projects after the split, most notably Rod Argent who recorded a hit album in 1972 with his new, prog-rock orientated band Argent. But it is Odessey And Oracle that is by far and away the best material that any of them have recorded, a true lost gem and one of the best British recordings of the 1960s. Paradoxically, it seems absolutely of its time now, but in 1968 it was maybe a little too ornate for its surroundings, an endangered species in the context of a music scene that was now going back to rock’s roots and disowning the whimsy and flights of fancy of post-Sgt. Pepper’s psychedelia. That’s how quickly pop used to evolve!

But rather than being regarded as psychedelic pioneers, perhaps it’s more informative to regard The Zombies as a band which helped expand the structural and sonic limits of conventional pop. While the listening public glossed over it upon release, Odessey And Oracle contains many elements that have proven durable for many artists, and a source of inspiration for every subsequent generation of musicians who have sought to introduce a little of the pastoral sounds of English psychedelia to their own material.

Listen to Odessey And Oracle by The Zombies here via Spotify, and tell us what you think below!