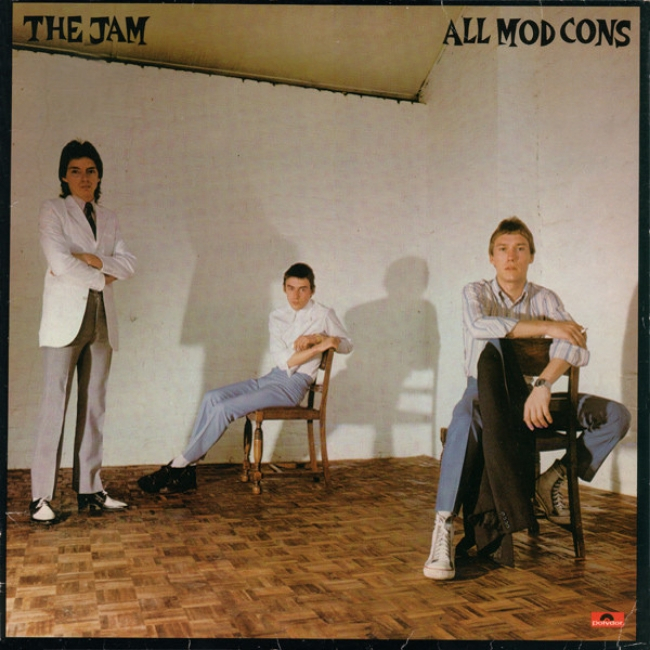 Influenced by: The Beatles, The Kinks, The Who, The Small Faces, Dr. Feelgood, Sex Pistols, The Clash, Elvis Costello

Given his long-standing and venerated status as ‘The Modfather’, an artist who’s never decreased his work-rate despite his various creative peaks and troughs over the decades, it’s hard to believe that Paul Weller was once in danger of being on the scrapheap. But this was exactly the position in which he and The Jam found themselves at the beginning of 1978.

Signed during the major-label flurry for punk bands in 1977, the trio released two albums in the space of seven months that year, but the second of those, This Is The Modern World, showed a paucity of original ideas and failed to yield the breakout hit that Polydor demanded, stalling in the charts. Weller returned from the American tour dispirited, disinterested and suffering from writer’s block. The first set of songs that he approached producer Chris Parry with were rejected by the label, forcing him back to the drawing board.

But rather than admit defeat, Weller dug deep and responded with a golden streak of songwriting. Released in November 1978, All Mod Cons represented The Jam’s first fully realised album-length work. Full of biting socio-political commentary and observational vignettes of down-at-heel life from a youthful, disenchanted perspective, it saw Weller earn the label of ‘voice of a generation’ for a whole swathe of young people, locked out of a class-ridden society that was already beginning to value materialism over community with the imminent election of Margaret Thatcher looming.

“I’d found my feet. After This Is The Modern World, I thought, ‘Am I going to let this slide or fight against it?’ My back was against the wall. It was a matter of self-pride,” Weller told Uncut on the album’s 20th anniversary in 1998.

Although they were initially lumped in with the London punk scene of 1977, The Jam were always much too suave and sophisticated, in love with the Sixties Mod scene and unwilling to be restricted by its nihilism, to be labelled as ‘punks’. The difference with All Mod Cons was that it represented the first time that Paul Weller embraced and built upon his 1960s R&B/beat influences, rather than merely copying them. Although their ascent to becoming household names would not happen until the next year, with the release of Setting Sons and its lead single ‘The Eton Rifles’, All Mod Cons is considered by many to be the point at which The Jam truly roared into life after a couple of fitful false starts.

The firing of that engine is evident from the very first moment of the 80-second salvo of ‘All Mod Cons’, a razor-sharp and absolutely direct moment of incisive punk. This prefaces a brilliant trio of songs which cut deep in their commentaries on British life, which both embraces the past but reformulates those influences to point to the future. ‘To Be Someone (Didn’t We Have A Nice Time?)’ analyses attachment to material success through the lens of a pop star on his uppers; the savage takedown of a suburban drone on ‘Mr. Clean’ is all the more vicious for the dampened guitar chords; and ‘David Watts’ sees Weller take on a Ray Davies composition and truly make it his own, with its class analysis of an effortlessly charmed life of a public schoolboy. Andy Partridge, Damon Albarn and Alex Turner all owe their careers to the restless energy of Weller’s writing and arrangements here.

Bassist Bruce Foxton and drummer Rick Buckler – always curiously anonymous in comparison to Weller’s reputation – come into their own for the first time, providing an array of brutally powerfully but surprisingly nimble musical chassis for Weller’s songs. It’s Foxton’s prominent basslines, for example, that are the spine of the standout track ‘Down In The Tube Station At Midnight’, a stunningly detailed story of casual, random violence with Weller’s semi-poetic narrative telling the story of a young man being attacked by right-wing thugs. But what’s most inescapable is the central nature of the writer to the action, the way the listener can see the world through Weller’s eyes, that makes it such a compelling closer to an urgent, intelligent album.

Those songwriting skills can again be heard in the apocalyptic crunch and thrust of ‘”A” Bomb In Wardour Street’, a track that made up an AA-side release with ‘David Watts’ which signalled that a more complex second wave of British punk was around the corner. The critique of consumerism of ‘In The Crowd’ and the bitter fantasies of the resentful ‘Billy Hunt’, while they aren’t part of the top tier of All Mod Cons’ tracks, were the kinds of songs that many of The Jam’s contemporaries would have killed for in 1978. The acoustic underpinning of ‘Fly’ allows Weller to be a lot more vocally expressive than on the punkier, sharper tracks.

The tender acoustic paean ‘English Rose’, although Weller wasn’t confident enough to even include it on the tracklisting or print its lyrics on the album’s sleeve, was an obvious standout on an album of economical, slashed guitar chords. Although Weller’s rough and ready voice isn’t quite suited for balladeering at this point in time, its central charm and gentle, quiet patriotism shines through. It was also the biggest indication on All Mod Cons that The Jam had more substance than most of their contemporaries, and exemplifies the way in which they would escape the coming backlash that would discredit most first-wave punk bands.

All Mod Cons paints a vivid portrait of what it was like to be young, frustrated, unemployed and feeling isolated and detached from mainstream culture, of revulsion at a national identity dictated to the people by a disconnected ruling class. It forms part of a strand of British pop songwriting that stretches back to Ray Davies, encapsulated XTC’s Andy Partridge and Pulp’s Jarvis Cocker, and can now be seen in Jamie T, in Arctic Monkeys’ Alex Turner, and in IDLES’ Joe Talbot.

After they broke through to the mainstream the following year, The Jam would go on to have four UK Number 1 singles from 1980 to 1982, evolving to embrace soul, funk and R&B but also keeping their songs grounded and accessible enough to allow their massive fanbase to make the journey with them. 1980’s Sound Affects and 1982’s The Gift, while a lot less unified than All Mod Cons, were showed a breathtaking and headstrong commitment to diversity in comparison to many of their peers.

Then, to the surprise of many, they announced their split at the end of a short tour in December 1982, seemingly at the peak of their powers. The following week, every one of their singles re-charted in the UK Top 75. Weller didn’t mess around, forming the patchy Style Council before embarking on a well-received solo career that continues to this day. The Jam’s influence on British music has been powerful, their combination of melody with ferocity echoing in many Britpop bands in the 1990s and 2000s, and they’re certainly up there with the very best bands produced by these isles.

Listen to All Mod Cons by The Jam here via Spotify, and tell us what you think below!