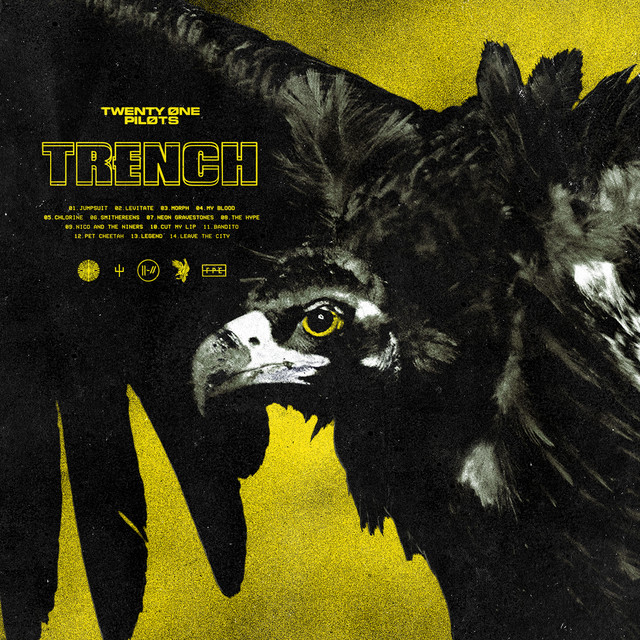 ‘Trench’ is the mature and well-crafted Twenty One Pilots album to date, achieving tonal coherence and with some of the best production in current alternative music and an intriguing dystopian narrative thread running through it.

Twenty One Pilots, the musical duo comprised of singer, songwriter, rapper, bassist, and beanie aficionado Tyler Joseph and drummer and hair icon Josh Dun, are back after a three year hiatus following their triple-platinum selling previous release Blurryface with Trench. A dystopian concept album built around a vague overarching metaphor for living with and overcoming depression, anxiety, a general state of mental fragility. Because it’s Twenty One Pilots, so of course.

If you have listened to more than one Twenty One Pilots song, the band’s bizarre genre-hopping blend of sound shouldn’t come as a surprise. On Blurryface the band explored themes of insecurities and anxieties, as personified by the conceptual titular character, along with the many stresses of growing up, the boundaries set by mainstream radio and religious faith. All to the beat of pop, hip-hop, alternative rock, dubstep, the whitest version of reggae, and what can only be described as emo ukulele music. Sometimes within the same song.

Trench explores mostly the same themes of mental distress and social anxieties the band is known for and for which they have earned their place in the millennial emo canon, with much of the same mentality of a genre free-for-all. However, possibly for the first time since their debut nearly ten years ago, they manage to do so with a sense of complete tonal coherency, avoiding jarring shifts in mood or sound during the album’s run-time that would freak out all but the core fan base, who knew what they signed up for before even putting the record on.

This, in part, is thanks to the absolutely excellent, crisp and futuristic production that keeps the album together underneath a healthy sheen of melancholic reverb, proper stereo electronica touches, and possibly the cleanest yet most intense drumming on an album this year (shout out to Josh Dun for Most Technically Improved musician award). Trench is the band’s first album to be co-produced by Paul Meany of Mutemath, who collaborated with the band back in 2016 for an EP of re-worked material from Blurryface, and the additional expertise shows.

When the beat drops in together with the ridiculously catchy hook on ‘Chlorine’, it feels like an electric shock to the brain on a good set of headphones. Trench is a lot more bass-led and low-end heavy than the band’s previous releases, and it is, again, to the credit of the production that everything sounds as clear as it does among the ambience, the reverb, the occasional brass sections, and the layers of distorted vocals.

‘Pet Cheetah’ is another highlight, as well as a meta-textual reflection on the band’s creative process. “I can feel pressure start to possess my mind / So, I’ll take this beat I should delete to exercise”, Joseph sings towards the end as the beat completely freaks out in one of the more experimental and glorious moments on the record.

Within the first two tracks of the album the band manages to run the entire gamut of their genre spectrum. Opener ‘Jumpsuit’ being a distorted, bass-led, heavy rock jam, reminiscent of something Muse might have put out in their heyday, while the following ‘Levitate’ being a straight up rap number, that sees Joseph exercise his inner Kendrick and drop a verse with arguably one of the best flows of his career: “This culture is a poacher of overexposure, not today / Don’t feed me to the vultures, I am a vulture who feeds on pain”. Yet the songs transition completely smoothly into one another with the help of some eerie synthesizers, somehow adding to the sense of possibility. When the beat suddenly kicks back in full-force on the last leg of ‘Levitate’ and a low-pitched voice utters “Welcome to Trench”, it’s genuinely shiver inducing.

A few months before the release of the album, a link to an odd website leaked on the band’s webpage. The website, that now holds only an error 404 code and a slightly concerning message about how “they mustn’t know you were here. no one should ever find out about this.”, contained photographs, letter fragments, maps, and various other cryptic messages, all detailing the life of a fictional character named Clancy and his disenfranchisement and subsequent escape attempts from the walled city of Dema, with the help of a rebel outlaw group called Banditos.

One doesn’t necessarily have to spend hours unveiling the plot and reading all the fan theories about this dystopian universe to enjoy or grasp the messages contained within the album. Especially since the album all but drops the narrative on certain moments, such as ‘Smithereens’, the obligatory song dedicated to Tyler Joseph’s wife, that may not be the most musically intriguing song on the track list, but is one that earns back almost all its points by sheer adorableness.

Nonetheless, delving somewhat into the world the band constructed does lend to the overall enjoyment, especially catching all the symbolism referenced in the lyrics. Such as the bishops that oversee the order of the city being blind to the colour yellow, hence the colour scheme of the album and the colour of the jumpsuits the Banditos wear to escape. Trench itself being the liminal space between Dema and freedom. Not quite under complete oppression anymore, but not quite free. The allegories write themselves. “I created this world to feel some control / Destroy it if I want”, Joseph sings over hushed, spacey ambience on ‘Bandito’.

Listening to Twenty One Pilots has, at least until Trench, been mostly about focusing on the many lyrical highlights of the band. Joseph’s meticulously crafted, well-articulated, and quite direct flows have always felt like getting your emotions punched in the face, only to end up loving the sensation and keep coming back for more, even if it means suffering through the more obnoxious EDM-like moments the band tended to pull. Props have to be given to the boys for upping their musical standard to match their lyrics on this release, but that’s not to say that that the emotional baggage of Tyler singing/rapping/screaming is any less visceral.

‘Neon Gravestones’ is the perfect example of this and stands as the most emotionally taxing moment on the record. The verses, delivered in a near-spoken word manner by Joseph, touch upon glorification of celebrity suicide and call for a celebration of someone’s life, rather than death. In an interesting and heart-breaking spin, Joseph speaks from the perspective of someone who could very much have pulled for an entry into the infamous “27 club”. “I could use the streams and extra conversations / I could give up, and boost up my reputation / I could go out with a bang / They would know my name” yet he pleads “Promise me this / If I lose to myself / You won’t mourn a day / And you’ll move onto someone else”.

Trench is Twenty One Pilots’ most mature and well-crafted album to date. All of the elements that earned the band its success are as present as ever – emotional gut-punch lyrics, ridiculously catchy hooks, a unique blend of musical genre. But more than that, Trench achieves tonal coherence throughout the entirety of its runtime, with some of the best production in current alternative music, and an oblique narrative thread running through the album that you can spend additional time delving into and exploring if you care. And it is kind of hard not to. (8/10) (Ellie Wolf)

Listen to Trench by Twenty One Pilots here via Spotify, and tell us what you think below!