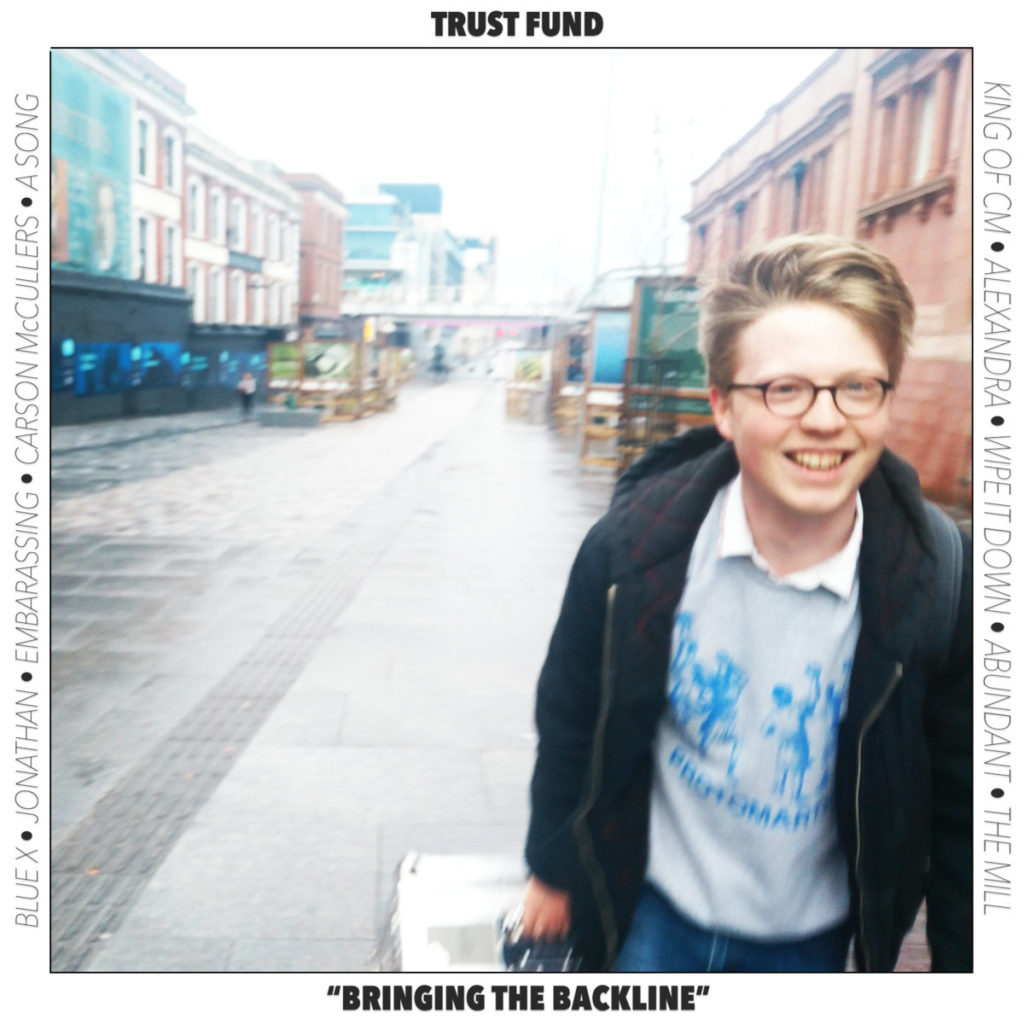 Picking apart the minutiae of his life with self-deprecating honesty with fifth and final album ‘Bringing The Backline’, Ellis Jones’ project Trust Fund will be sorely missed.

Bringing The Backline is the fifth and, sadly, final album of indie-pop project Trust Fund, a band spearheaded by Bristolian Ellis Jones, who enlists help from a rotating cast of musician friends. Since its debut “don’t let them begin” in 2013, Trust Fund’s line-up has changed multiple times but retained a uniformity of sonics and themes. As a valedictorian statement, Bringing The Backline is a worthwhile conclusion that stays true to the splendidly dismal tone that has made Trust Fund what it is.

The single ‘Carson McCullers’ is an expressive, modern break-up song. It’s told from the perspective of a guy who yearns to speak to his sweetheart, but for an undisclosed reason simply can’t. The song brushes on the ease of modern communication and lays bare the thoughts that taunt him; theoretically, the two could be speaking, Jones sings “For her messages / I would wait forever”. But it’s clear she’s moved on, her attention is diverted elsewhere, and he ponders, or maybe even knows, that she’s talking about him in a group chat. The song is poetic, reflective of the contemporary and sits on misleadingly upbeat instrumental.

‘Abundant’ is a sister track to ‘Carson McCullers’, fuelled by an up-tempo guitar and electric piano, the song picks up where the previous had left us, Bringing The Backline’s colourful raconteur continues to question the nature of his break-up, picking the details of every interaction.

Jones produces a refreshingly honest, amusing 34 minutes of indie pop. The album revels in the humorous, candid self-depreciation that characterised the better indie-rock of the early 2000s. But also flirts with the confessional nature of pop-punk. Take ‘embarrassing!’, which taunts the listener with a quick self-report of how depressive and lacklustre his life is, but attempts to reclaim it as eccentric, teasing “there can’t many be like me out there”. Lyrically, Bringing The Backline is unfiltered, stream of conscious-style story-telling, with Jones himself stating that the writing has “details specific enough to feel frank and confessional, yet non-specific enough to allow for the listener to substitute in their own life experiences”. Hopefully he won’t be quitting music for good, as Ellis Jones has been too good a talent for too short an amount of time. (8/10) (Benita Barden)

Listen to Bringing The Backline by Trust Fund here via Spotify, and tell us what you think below!