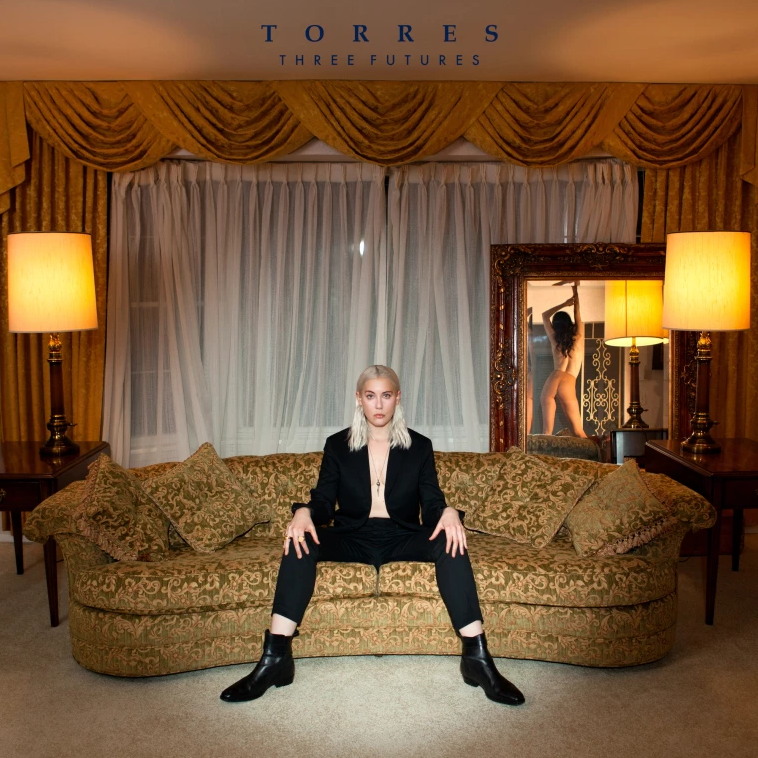 Mackenzie Scott’s third TORRES album ‘Three Futures’ has pushed into the highest echelon of women working at the peak of their powers in indie.

In her first two studio albums, Florida-born songwriter Mackenzie Scott, who records under the name of TORRES, has taken her strict Southern and religious upbringing as her focus point and muse for her compelling mixture of folk and experimental music. Now, with third album Three Futures, and first for the prestigious indie imprint 4AD, Scott has sought to bust her existing sound wide open, reaching for artificial and synthetic textures to add to her neo-folkisms.

Constructed from programmed drums, cold and warm synthesisers, and treated guitar abstractions, it is a considerable evolution from the music of previous TORRES releases, her self-titled 2013 debut and 2015’s Sprinter, but still very much a natural one. Three Futures is thematically concerned with concepts of space, both personal and musical, and the subversion of traditional expectations, and the minimalist frameworks of its songs provide the perfect bedding for Scott’s carefully enunciated, death’s-head intonations that are curiously reminiscent of the legendary Nico. Through her descriptive, vivid lyrics, she’s able to occupy different narrative positions and twist them to provide unusual insight.

The opening ‘Righteous Woman’ is just such an example. Inspired by the phenomenon of ‘manspreading’, Scott opens “I’m not a righteous woman / I’m more of an ass man / and when I go to spread / it’s to take up all the space I can”. Changing her narrative position, it suggests that her previous struggles with identity are behind her and she’s now more comfortable with herself. Three Futures’ title track also suggests this – again an allusion to religious imagery, its distorted, stretched guitar-work makes it a futuristic delight. ‘Tongue Slap Your Brains Out’ is alive with sensual descriptions, and ‘Bad Baby Pie’ is seemingly a reassurance to her loved ones as well as herself that she’s reconciling her past and present.

While the dark, often withdrawn and moody production of Three Futures can seem quite homogenous at first, there’s immense amounts of detail to be discovered in individual moments. The album’s lead single ‘Skim’, a slice of slow, luxurious electro-pop with a piercing guitar figure, is a wonderful encapsulation of the album’s sonic values; the imperious ‘Greener Stretches’ is built on rolling licks of beats; and ‘Marble Focus’ shimmers with beautiful restraint.

New single ‘Helen In The Woods’ is a rather cacophonous anomaly in the context of slow-paced, industrial feel of Three Futures, but is no less wonderful, a dissonant tale about a high-school crush gone psychotic and overly-obsessive. The album finishes with the eight-minute epic ‘To Be Given A Body’ – it also shows that Christianity is still central to Scott’s physical and spiritual quests for identity, an acknowledgment to whatever creator we might have that we have an obligation outside of ourselves to live life to the full.

Along with the likes of Nadine Shah, Lorde and her erstwhile 4AD labelmate Annie Clark (aka St. Vincent), Scott has put herself in the highest echelon of women operating at the peak of their game in 2017. Three Futures is a daring, memorable and overwhelmingly successful venture, the kind of gamble that proper musical ingénues concerned with artistry over commerce make and of which modern music desperately needs more. (8/10) (Ed Biggs)

Listen to Three Futures by TORRES here via Spotify, and tell us what you think below!