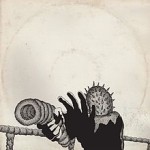 Thee Oh Sees have become one of the US’s most consistent indie acts over the last five years. They have consistently put out great, stripped-down records and now onto their ninth record, lead singer John Dwyer return with his unique blend of fuzzy psych-rock. After a very brief hiatus that lasted all of a month, the San Francisco-based band returned with 2014’s Drop which featured yet another line-up change and the same genius Nuggets-era garage sound as 2013’s Floating Coffin, the exceptional record that finally brought them some wider attention.

Mutilator Defeated At Last sees a very slight change in direction, in so for as not every track hurtles towards its conclusion at breakneck speeds. Tracks including ‘Sticky Hands’ and ‘Holy Smoke’ are folk-inspired with a smattering of overdriven bluesy riffs. It’s certainly a darker, grungier sound on this record and this is typified with the album highlight, ‘Withering Hands’. There’s a hint of War Pigs-era Black Sabbath here and John Dwyer’s vocals are less lo-fi and more comprehensible than on previous records. ‘Rogue Planet’ and ‘Lupine Ossuary’ have a similar feel to their Floating Coffin-era sound, but we are unexpectedly thrown off with album closer ‘Palace Doctor’. A tranquil guitar riff features over quiet vocal harmonies and it’s an underwhelming end.

On this record Dwyer is focusing far more on the composition of his songs, rather than being an all-out barrage of psych-pop. For hard-bitten fans, who absolutely adore the way that Thee Oh Sees focus on such a narrow and specific part of rock history and have mined it so thoroughly without ever sounding like they’re about to exhaust their resources, it may be seen as a slightly underwhelming effort due to its darker, more subdued sound, but the sprawling guitar riffs and interesting compositions are enough to feel that the group have just gotten by. (6/10)